Harley-Davidson's (NYSE:HOG) touring motorcycle sales experience strong seasonal fluctuations due to the nature of bike riding. To adjust to this seasonality, the company has begun implementing surge manufacturing to be more flexible. With competition like Polaris' (NYSE:PII) newly launched Indian Motorcycle lineup, Harley needs to keep its hand on the throttle. 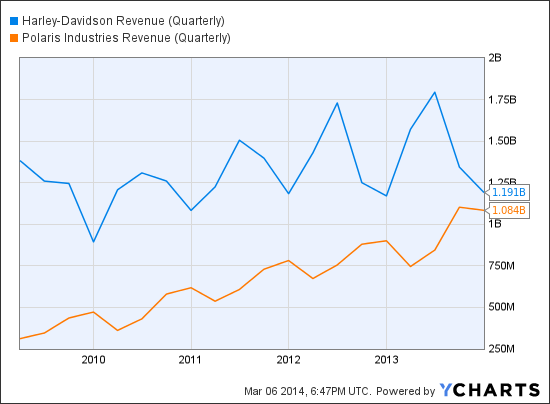 While many motorcycle riders will say, "Riding season doesn't end," you can see from the chart that revenue increases in anticipation of warm, spring and summer months and plummets during the winter. The company has identified seasonal changes in retail sales as a potential risk factor and has implemented a new production strategy to become more flexible for sales increases.

Historically, the company would ship motorcycles at wholesale to its North American retailers during the late fall and winter when the retailers would build up their inventories. That started to change in 2013 when Harley started surge production, a method that increases the company's ability to quickly produce motorcycles before and during peak sales months. Surge production is more flexible than Harley's old production model and will help tailor supply to market demand.

The company implemented surge manufacturing at the York, Penn., facility during the first half of 2013. Additional workers were hired in order help boost production during the period of high demand. According to CEO Keith Wandell, "We saw great improvement in better matching our production to customer preferences, seasonality and geographic demand." At the beginning of 2014, surge production began in Harley's Kansas City plant showing that the company has committed to the flexible production strategy.

Competing lean
Polaris, the company behind the relaunch of Indian Motorcycles, has also been working to improve production flexibility. Polaris has adopted a lean manufacturing process that focuses on maximizing the efficiency of a company's value stream in order to quickly react to market demand. By reacting to the market instead of trying to predict it, a company only produces what customers want and can increase inventory turnover.

Polaris has been consistently investing in lean manufacturing and recently appointed Jonathan Blaisdell to the position of Chief Lean Officer. This appointment will help increase the overall effectiveness of lean production for the company. Because Polaris produces off-road vehicles and snowmobiles in addition to heavyweight motorcycles, the company posts its highest revenue during the winter. Lean manufacturing reacts to this seasonality and helps Polaris reduce its production costs. As the Indian brand grows, I'd expect to see revenue growth during spring and summer.

Still on top
Harley-Davidson is still the leader in heavyweight motorcycles, but the company has stiff competition with the relaunch of the historic Indian Motorcycle brand. By transitioning to surge production, Harley will be able to supply its retailers with inventory that matches the seasons demand and properly utilizes its production facilities. Production will be more efficient and Harley will become a more profitable company while competing against the lean manufacturing capabilities of Polaris.

When asked about the Indian brand, CFO John Olin said, "So they sold some motorcycles, but nothing outside our expectations at all." This shows that Harley is not worried about Polaris' new bike line, and with 54.9% of the total 601+cc motorcycles registered in the U.S., the company is still the top hog.