While new housing starts fell slightly from January and are still well below historical averages, the underlying numbers point toward continued growth.

The latest new residential construction numbers (link opens PDF) are in, and they aren't great.  But despite the continued lag in new housing starts, there is some good news to glean.

February's housing starts -- the number of new residential housing units begun in the month -- remained flat at a seasonally adjusted rate of 907,000 compared to January's 909,000. The numbers are down more than 6% from February 2013's rate of 969,000 and still well off from the historical average of almost 1.5 million: 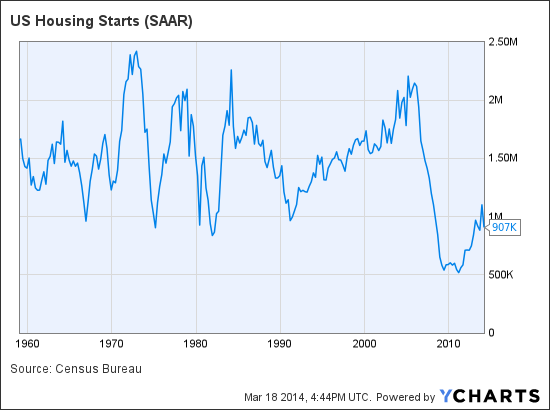 Positive signals in new permits
February's numbers for new permits came in at more than 1 million, up 7.7% from January's revised numbers and up 6.9% from February 2013. There are several indications that both January's and February's physical starts were affected by poor weather -- especially on the East Coast -- while permits numbers tend to be much less affected by weather.

Revisionist history
For investors looking to glean valuable insight from the monthly numbers, it's important to remember a couple of key points:

New residential construction is a highly cyclical business, and we are still more than 30% below the historical averages for new construction. On the surface, this indicates that now is a good time to invest in homebuilders.

Where to invest?
KB Home ( KBH 0.31% ) and Lennar ( LEN -0.70% ) are still well off their highs from before the housing collapse and could offer upside for patient investors willing to let the housing market continue to recover. Lennar's earnings per share increased 30% last quarter, while new-home deliveries were up 27%. Earnings for the full year were down 30% -- but this is where context is key: 2012's earnings were largely driven by a $435 million tax benefit from the previous years' losses, while the company could only carry forward $177 million in tax losses in 2013. Normalize Lennar's earnings without the benefit of prior years' losses, and the company performed well in 2013.

KB Home's 2013 results won't be out until Wednesday morning, but one positive investors should note is that management is making efforts to return value to shareholders. Since June 2007, the company has reduced shares outstanding by more than 18% through buybacks and has also continued to pay out a small dividend. Combined, these efforts mean that investors today own a larger percentage of a relatively strong company in the early stages of a cyclical rebound in its business.

Another path worth considering is the SPDR S&P Homebuilders ETF ( XHB -0.35% ). Not only does this index fund give investors a stake in homebuilders, but it also has exposure to home improvement retailers like Home Depot and Lumber Liquidators, as well as construction goods makers like Owens Corning. As the housing market returns to historical levels over the next few years, investors in this ETF will have a stake in the various industries and companies that will all benefit from the market's growth.

Look at the big picture -- not just one piece of data
Remember that the housing-starts data is a survey -- and an inaccurate one at that. The numbers will be revised numerous times, and it will be years before we know the real housing-starts numbers for last month. However, the long-term trends indicate that residential construction is indeed recovering. It's still well below historical averages, and that could make now a good time to invest in the recovery.