While LINN Energy (OTC:LINEQ) and LinnCo (NASDAQ: LNCO) delivered strong fourth-quarter results, investors weren't impressed with their 2014 guidance. One reason that guidance was lower than expected is because the company is pulling back on its capital spending plan by 11%. However, its new plan has a lot of positives worth a closer look.

Overview of the 2014 capital program

Now that LINN Energy and LinnCo have gobbled up Berry Petroleum, the combined oil and gas producer aims to high-grade its capital program and focus on more predictable and higher returning assets that will provide greater stability to the company's distribution. Seventy percent of the capital program will be focused on oil projects that have a lower decline rate. However, as the following chart shows, it's still a fairly balanced program by geography. 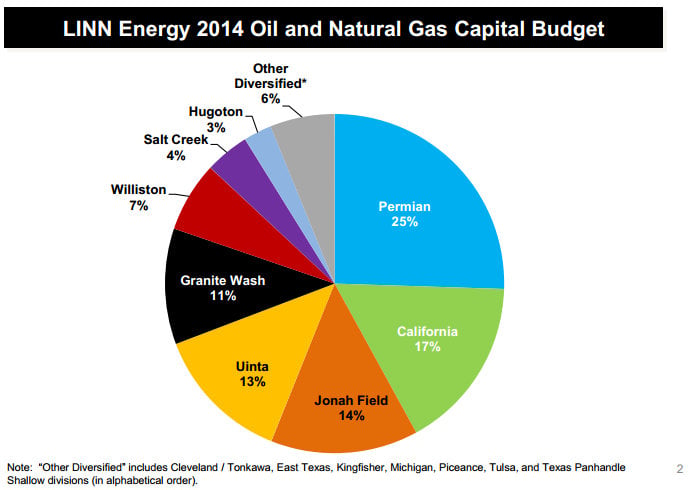 LINN Energy is spending the largest amount of its 2014 capital in the Permian Basin, with California and the Uinta Basin also seeing large amounts of money. LINN acquired land in all three areas as part of the Berry Petroleum deal. Let's drill down into why the company is targeting these three zones, as well as why it is still investing in the gas-rich Jonah Field.

Permian Basin
LINN Energy is really excited about its potential in the Permian Basin. While the company is exploring strategic alternatives for a portion of its acreage in the Midland Basin, that's not stopping it from investing in the play. Overall, about 67% of the money invested in the Permian Basin will be spent in that part of the play.

Some of that capital will be spent to drill 10 horizontal wells in the Wolfcamp B Zone, a promising oil-rich target. LINN will also drill 80 wells into the Clearfork formation in its recently acquired East Goldsmith field. When LINN acquired this oil-rich field it noted that the zone had at least 300 future low-risk drilling locations. LINN here is balancing its higher-risk horizontal drilling in the Wolfcamp with much lower-risk drilling in the Clearfork.

California
The crown jewel of the Berry Petroleum acquisition was its oil-rich assets in California. That deal made LINN Energy the fifth-largest producer in that state, which the company expects to deliver significant free cash flow and oil-rich production growth.

The growth asset here is the North Midway-Sunset operations encompassing the Diatomite and New Steam Floods. In 2014, LINN Energy will spend about $190 million of its $255 million California capital budget on this asset. It expects that capital to fuel a 35% year-over-year jump in production. After that growth phase is complete these assets will yield low-decline production that should generate a lot of free cash flow for LINN Energy.

Uinta Basin
LINN Energy expects this year to drill about 115 wells in the Uinta Basin. It's not alone in adding the play to its portfolio, as Ultra Petroleum (OTC:UPL) bought into the basin last year. Ultra and LINN both see the Uinta Basin providing significant operational cash flow and oil-rich production growth.

LINN Energy biggest focus in the Uinta will be on improving its returns. That includes reducing drilling time and continuing to ship more crude oil by rail so that it can get a better price for its product. Delivering on both goals would provide more strength to the company's distribution.

Jonah Field
Finally, LINN will spend about $220 million on the natural gas-rich Jonah Field, which the company likes for its very low decline rate and where Ultra Petroleum is also focusing operations. One area to watch is ethane rejection, which is something LINN Energy expects will continue throughout 2014. This involves ethane that isn't sold as a higher valued petrochemical feedstock, but is instead sold as natural gas. If LINN Energy's ethane isn't rejected it could earn the company some incremental income.

Investor takeaway
The LinnCo led Berry Petroleum deal really is the key feature of LINN Energy's 2014 capital program. That deal provided LINN with the opportunity to invest in a very oil focused program. In addition to that most of the capital LINN spends will be geared toward lowering its decline rate so the company really is focused on stabilizing its distribution as opposed to growing it. However, because the company is focused on lowering its decline rate that base of production should make it easier for LINN to grow its distribution over the long-term.