LINN Energy, LLC (OTC:LINEQ) and LinnCo, LLC (NASDAQ: LNCO) recently reported pretty strong fourth-quarter results. If there was one concern, it was the fact that the company isn't expected to grow its production all that much in the second half of the year. One of the reasons for this is due to the company's plan to explore strategic alternatives for its acreage in Texas' Midland Basin.

While the company awaits the outcome of that review, it is simultaneously pursuing a plan that has it drilling 10 horizontal wells on its acres in the second quarter. This is part of the company's $395 million capital plan for the Permian Basin, with 67% of those funds to be spent in the Midland Basin. If the results are really good LINN Energy could decide to keep funding a drilling program and over time drill the 1,085 potential locations it estimates exist on its acres as the slide below details. 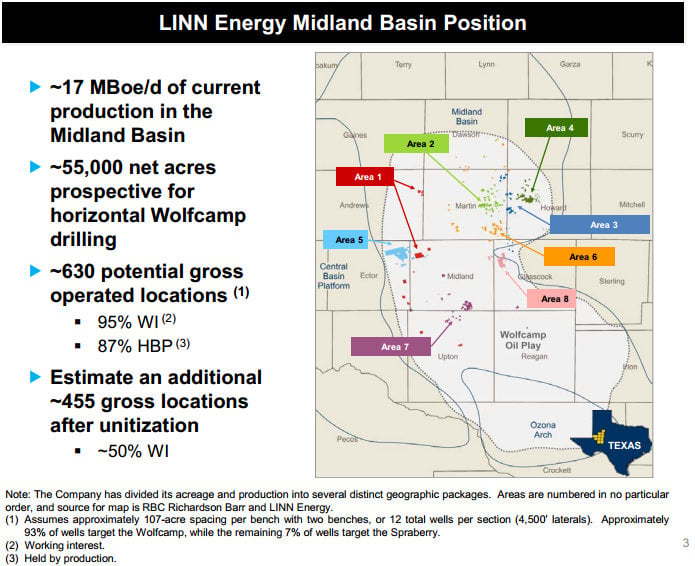 However, I personally don't see the company engaging in an active horizontal drilling program. The company has noted that it's looking to lower its overall decline rate, which wouldn't happen by drilling a lot of rapidly declining horizontal wells. Instead, I think the company is more likely to either trade some or all of these acres for long-life, mature producing assets. This could be a straight up asset trade or a "like-kind-exchange".

Being a banker
One of the reasons I think this is likely is because of some comments management made on the conference call. CFO Kolja Rockov said that,

We find ourselves in somewhat a unique position because most of the time when we make an acquisition we go to the capital markets to finance it and now we have an embedded asset that's worth a lot that basically provides us a bank for financing future acquisitions and we put a lot of effort and time into putting a lot of detail out there and I think I am not going to give you a range of value, but I mean there is a lot of public market comps out there and you can take a look at it yourself. And that should give you an idea of what the size of that bank is if you will and it's just pretty compelling.

A few months later Denbury Resources used the cash it received from ExxonMobil to purchase a billion dollars in assets from ConocoPhillips (NYSE:COP). By utilizing a "like-kind-exchange" Denbury Resources was able to defer $400 million of the $500 million in cash taxes it would have had to pay on the ExxonMobil deal. What's truly unique about this particular example is how well this worked out from a strategic standpoint. That deal really set up future growth for Denbury Resources as it can use the carbon dioxide it acquired from ExxonMobil to fuel enhanced oil recovery operations on the assets it acquired from ConocoPhillips.

Investor takeaway
LINN Energy's assets in the Permian Basin offer similar potential for a unique deal structure that could add a perfect low-decline, high margin oil asset into the company's portfolio. As its CFO noted, LINN Energy and LinnCo can use these embedded assets as a bank to make a trade and/or buy additional assets. That really is a compelling opportunity that few investors realize exists.