Having suffered a disappointing 2014, General Electric (NYSE:GE) investors must be wondering what 2015 has in store. During Jeff Immelt's tenure as CEO, the company has weathered a number of unfortunate macroeconomic events. Unfortunately, the run of mishaps seems to have continued last year. Management invested heavily in oil and gas businesses, only to see the price of oil crash in late 2014. Meanwhile, GE's retail finance unit, Synchrony Financial (NYSE: SYF), was spun off in the summer in an initial public offering for $23 per share, after which the stock price rose nearly 30% by the end of the year. With that said, investing is about what happens going forward, so how is General Electric shaping up for 2015? 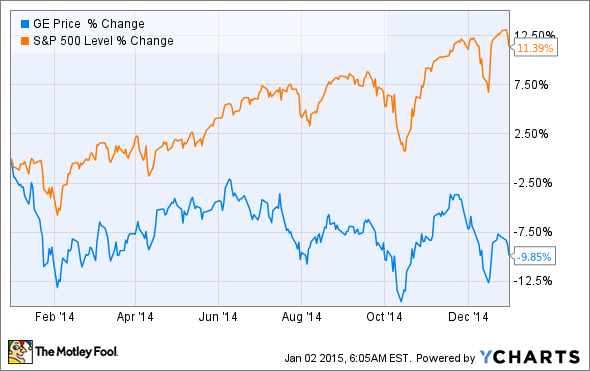 What matters to General Electric

Here's a breakdown of GE segmental profit for the first nine months of 2014. The appliances division has been sold to Electrolux and the Synchrony spinoff is part of the long-term plan to downsize GE Capital. Therefore, investors should focus on the power and water, oil and gas, aviation, and healthcare segments. 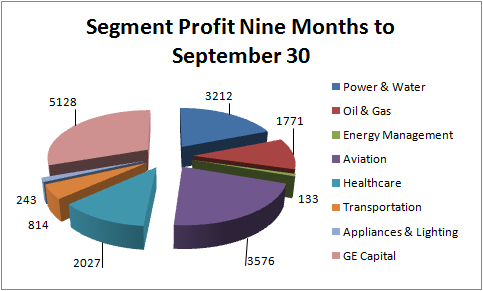 Ongoing restructuring
I believe there are six points for investors to consider before making an investment decision on the stock in 2015. The first three points relate to the company's ongoing restructuring. First, the company's most productive segment is power and water, where in 2014 GE made the major acquisition of the energy operations of French conglomerate Alstom. Integrating the two businesses will allow General Electric to generate earnings growth through cost synergies, with management expecting to generate $1.2 billion in annual cost synergies by the fifth year of the deal. Ultimately, the acquisition means that a large part of General Electric's growth prospects in 2015 depend on its internal execution within an area of core competency.

Second, management plans to strive to increase the share of earnings from industrial operations to 75% -- a marked adjustment to the revenue split of the last decade. 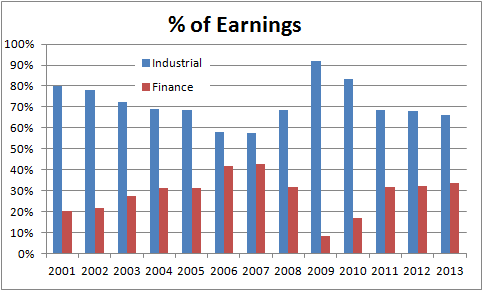 Management expects earnings per share from its industrial business to increase by double digits in 2015. Indeed, industrial segment profit rose 9.6% in the first nine months of 2014, indicating that its underlying growth is good.

Macroenvironment could be a positive
Despite the doom and gloom surrounding the oil market, there are three reasons GE's overall end-market environment could be more favorable in 2015 than in 2014. Before outlining them, it would be remiss not to point out that Immelt was asked at the outlook meeting in December whether low oil prices were good or bad for General Electric. He responded: "[W]e think a lot about that. I'd say on balance it's probably close to a wash. It's probably close to a wash to a slight negative, but it's not a big negative is the way I would think about it."

However, I think there is reason to think the outlook might be a bit more positive than Immelt indicated.

Second, Immelt disclosed at the outlook meeting that the company's healthcare segment is seeing improving conditions in the U.S. Revenue growth from China is expected to be in the "high single-digits," resulting in anticipated global revenue growth in the '"low to mid-single-digit" range.

Third, Immelt argued that not all of GE's oil and gas services businesses were likely to get hit in 2015:

So we kind of see 60% of the portfolio revenue being OK. We see 15% where the revenue will continue but orders are going to be very tough to come by and we see 25% where revenue is going to be hard hit as you look at where you go. So it's a diversified business.

General Electric 2015
All told, GE investors have much to look forward to in 2015. Internal execution with the Alstom deal and Synchrony Financial distribution will help generate shareholder returns.

Meanwhile, the company's refocused industrial operations continue to grow profits at a double-digit pace -- demonstrating good growth in an area where management wants to focus. Low oil prices will hit some of its oil and gas operations, but it could be a net positive elsewhere for the company. In a nutshell, provided the economy holds up, General Electric could leave 2015 in a stronger position than when it entered.

How Is General Electric Company (GE) Shaping up for 2015? @themotleyfool #stocks $GE Next Article
Current