One of the first things investors look at when analyzing an industrial conglomerate like General Electric (NYSE:GE) is segmental margin. It's a good way to tell which units are outperforming and where the company should be investing. However, it's also important to look at the segmental income generated from assets, defined here as the return on assets, or ROA. This can actually be a more useful measure, because it indicates which of the company's segments are its most productive. In the case of General Electric, an ROA analysis produces some good news for investors interested in its strategic direction.

General Electric's segmental margin
The following chart demonstrates that the company has four segments that consistently generate margins above 15%. I have included the now-divested appliances and lighting segment so investors can better judge whether its sale was a good idea. 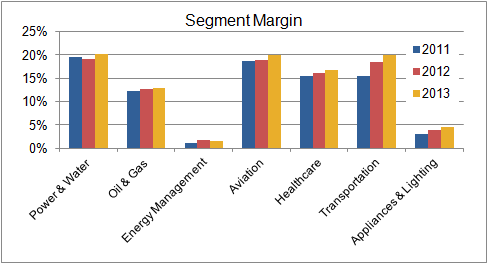 On a segmental margin basis, it's clear that power and water, aviation, healthcare, and transportation are GE's most profitable segments. However, a look at segmental income for 2013 shows that transportation only made up about 7% of industrial income -- it's not a major segment. For reference, the company also has a finance arm that generates around a third of total income. 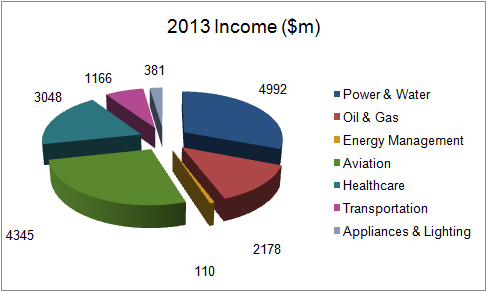 General Electric segmental return on assets
Turning to ROA, the following chart shows that the largest of the major segments, power and water, is also the most productive. (I will return to this point shortly.) 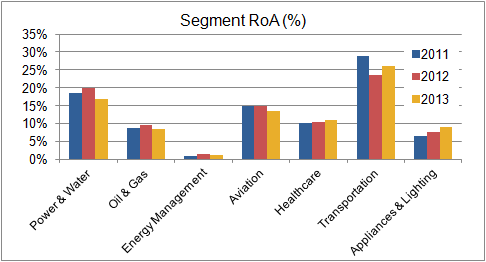 Some other key conclusions garnered from the charts:

Of course, managing a conglomerate isn't just about investing in high-ROA areas -- companies make strategic investments for a host of reasons. For example, investors already know that building the oil and gas business is a strategic focus at GE, partly because the company was previously underexposed to oil prices when they were rising. In addition, healthcare is a relatively defensive industry, and GE's commercial aviation segment looks set for good long-term growth.

With that said, the most striking thing about this analysis is how it justifies management's decision to refocus on its core power and water segment by acquiring the power and grid assets of French conglomerate Alstom.

The Alstom deal makes sense
The Alstom deal isn't really about growing the acquired business; instead, it is more about consolidating an industry in which General Electric is a leader and generating cost synergies out of the combined assets. Indeed, GE management expects the combined operations to generate $1.2 billion in annual cost synergies by the fifth year of the deal. This is an impressive number, given that the deal value is $15.4 billion and Alstom generated $1.5 billion in income from operations of its power and grid assets in 2013.

Focusing management on what it does well
As readers can see, GE derives the highest segmental ROA from the power and water business. Therefore, the Alstom deal focuses management on what it does well, which is good news for shareholders. Looking ahead, if you buy stock in General Electric, it's clear you will be buying into the idea that management's execution -- in generating organic growth, as well as cost synergies with the Alstom acquisition -- within its core sector of strength would take the stock higher. Given the data above, that wouldn't be a bad idea at all.