Comparing the tenures of Jack Welch and Jeff Immelt as CEO of General Electric (NYSE:GE) is almost a pointless endeavor from an investor's perspective. In the end, the primary focus of General Electric investors is shareholder return, and in the 13 years of Immelt's leadership, the stock's return (adjusted for dividends and stock splits) is just 9.4% compared to Welch's 5,400% during his 20-year stint as CEO, from 1981 to 2001. The difference is stark. However, Immelt is a much better leader than those numbers might suggest; here's why I think he's taking the company in the right direction.

Size and market conditions matter
First, Welch inherited a smaller and nimbler company (revenue of $26.8 billion) than the one ($130 billion) he would hand over to Immelt. At a certain point in a company's growth, it becomes harder to continually generate increasing profit growth, and/or increase return on capital employed, or ROCE.

ROCE is simply earnings before interest and taxes, or EBIT, divided by capital employed (total assets minus current liabilities) -- a great way to see how well a company is working its assets. The chart below shows how ROCE declined with revenue growth. Readers should note that the decline in ROCE (blue line) began before Immelt took over in September 2001. 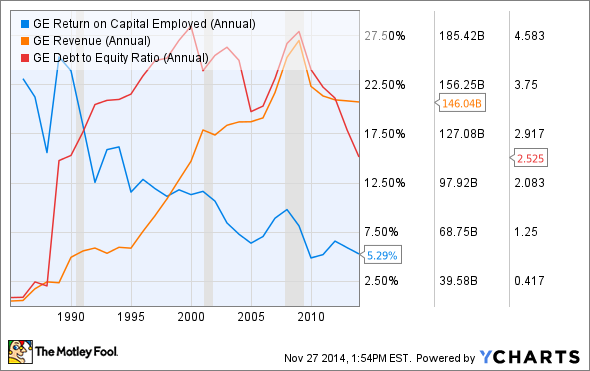 Second, Welch's relentless takeover activity resulted in increasing the company's debt-to-equity ratio. In fact, Welch made nearly 1,000 acquisitions during his tenure. An acquisition-led strategy is easier to execute when the economy keeps growing, because future economic growth makes it easier for the acquired companies to generate the cash flows required to pay off the increased debt.

General Electric's positioning
Fourth, back in 2001, the company wasn't structured to deal with rising oil prices. In 2003 (the year the economy started to grow meaningfully again) just 1.5% of segmental operating income came from the company's oil and gas segment. Meanwhile, two segments that could be expected to suffer with high oil prices -- energy (largely industrial gas turbines) and aviation -- contributed 22.6% and 10.5%, respectively.

Oil prices seemed to rise from the day Immelt took over: 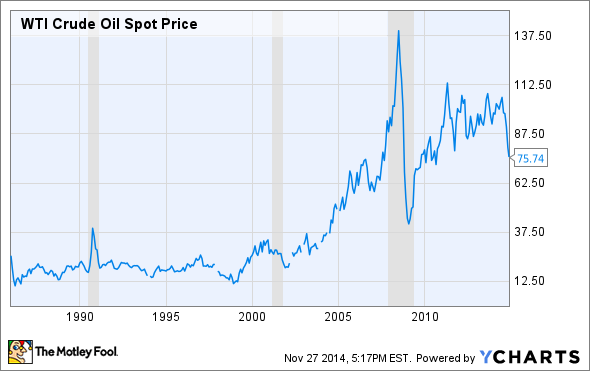 Rising energy prices helped to hold back investment by U.S. utilities, while the global airline industry (also reeling from 9/11) was only profitable for two years during 2001-2009. 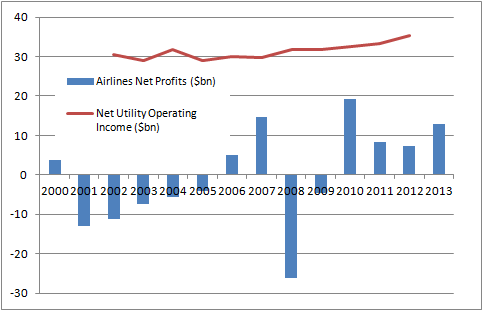 It's easy to blame Immelt, but recall that he took over the company that Welch left -- a company forged in an era of low oil prices. 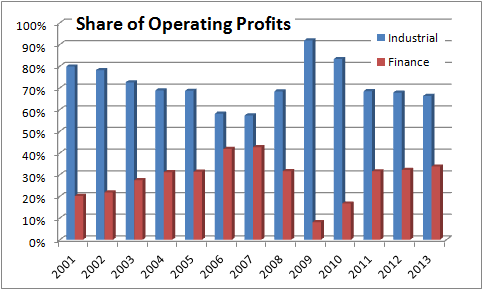 Where Immelt is taking the company
In a sense, Immelt seems to be restructuring the company in order to deal with previous risks.

Where next for General Electric?
From this analysis, it's clear that market conditions were favorable for Jack Welch, and his leadership genius resulted in sensational returns for investors. On the other hand, Immelt has been dogged by unfavorable market conditions, while also making decisions that, only with the benefit of hindsight, proved to be mistakes.

However, in reducing the company's exposure to rising oil prices and the credit markets, Immelt seems to be addressing those issues. Moreover, he has focused the company on areas where it has leadership, such as aviation, and power and energy. In short, I think Immelt has put the company in better shape to deal with a range of market conditions, and investors might start to see the benefits of this work in coming years.