Graphics chip company NVIDIA (NASDAQ:NVDA) blew past analyst estimates when it recently reported its fourth-quarter earnings, posting a big jump in profits driven by strong revenue growth. The company's core GPU business more than made up for a decline in the mobile Tegra business, and the stock soared the following day, creating a new 52-week high in the process. Here's what investors need to know about NVIDIA's blowout quarter. 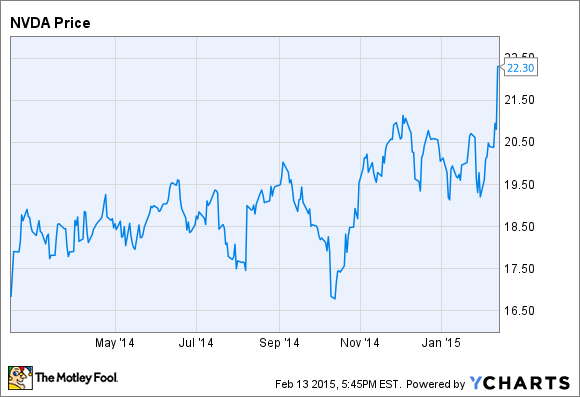 Revenue grew 9% year-over-year to $1.25 billion, slightly above what analysts were expecting. Generally accepted accounting principles, or GAAP, EPS rose 40% year over year, to $0.35, driven by a 1.8-percentage-point increase in the gross margin, and just a 3.5% year-over-year increase in operating expenses. Non-GAAP EPS was $0.43, beating analyst estimates by $0.14.

NVIDIA expects first-quarter revenue of around $1.16 billion, representing year-over-year growth of about 5%. Gross margins are expected to be 1.5-1.8 percentage points higher compared to the first quarter of 2014, while operating expenses are expected to rise at about the same rate as revenue.

A strong gaming business
NVIDIA has been the leader in discrete GPUs for the past few years, shipping about 70% of all add-in board units during the third quarter of 2014, leaving the rest to rival Advanced Micro Devices (NASDAQ:AMD). While AMD's GPU business was weak during its fourth quarter, contributing to big losses for the company's PC segment, NVIDIA's was stronger than ever.

Revenue from PC gaming platforms rose 38% year over year, driven by the high-end Maxwell-based GPUs launched in September, the GTX 970 and GTX 980. A mid-range option, the GTX 960, launched on Jan. 22, just a few days short of the end of the quarter . While it may have had a minimal effect on the quarter's results, it should help NVIDIA reach its guidance for the first quarter.

AMD is expected to launch new GPUs sometime in the first half of this year, which could pressure NVIDIA's business in the second half. However, despite new product launches in the past few years, AMD has continued to lose market share to NVIDIA. With AMD struggling to even turn a profit in its PC business, NVIDIA has a meaningful advantage going forward.

A booming enterprise business
Beyond gaming, NVIDIA operates a fast-growing enterprise business. Tesla is the company's line of GPUs aimed at the supercomputing and high-performance-computing markets, and GRID is NVIDIA's enterprise GPU virtualization platform. These aren't big businesses at this point relative to gaming; Tesla generates several hundreds of millions of dollars per year, according to CEO Jen-Hsun Huang, and GRID is likely much smaller.

But both businesses are growing fast. Tesla revenue grew by more than 50% year over year, driven by both high-performance-computing customers and cloud-service providers. One big win for NVIDIA during the quarter was a pair of supercomputers being built by the U.S. Department of Energy. The supercomputers will be powered by IBM's Power processors and accelerated with NVIDIA's next-generation Tesla GPUs.

NVIDIA GRID allows GPUs within a server to be virtualized, allowing users to run graphics-intensive applications remotely. Enterprise customers often require extensive testing before committing to new technology like GRID, so it can take many months to convert a trial customer into actual revenue. But GRID revenue has doubled year over year, and the number of trials has increased to more than1,000, up from around 400 one year ago.

Tesla and GRID are two big growth opportunities for NVIDIA, and as time goes on, they'll both become increasingly important components of NVIDIA's business.

A shifting mobile business
NVIDIA has struggled during the past few years to find a market for its mobile Tegra chips. It had some success with the Tegra 3, winning quite a few mobile device wins, but the Tegra 4, Tegra K1, and the new Tegra X1 have had far less success on that front.

Tegra revenue declined year over year during the fourth quarter, no doubt in part due to the lack of device design wins. However, the strategy now seems to be focused mainly on the automotive market, as well as NVIDIA's own Shield gaming devices. Huang confirmed in the company's conference call that automotive, which is mostly infotainment at this point, and the Shield devices make up the vast majority of the Tegra business.

The good news is that the automotive business is growing incredibly fast. Automotive revenue grew by 80% year over year, and there are now 7.5 million cars on the road containing NVIDIA's chips, up from 4.7 million one year ago. During CES, NVIDIA introduced two new automotive platforms -- one for driving in-car screens, and the other for providing the object detection necessary for driver assistance and autonomous driving features.

Tegra is still not profitable; in the nine months ending in October, the Tegra segment recorded an operating loss of about $170 million. But with automotive now the central focus, and with rapid growth likely to continue, profitability for Tegra may not be too far off.

A fantastic quarter
NVIDIA's core gaming business is strong, and both the enterprise and mobile businesses offer substantial opportunities for growth. The balance sheet remains cash rich, with more than $4.6 billion in cash, and only $1.3 billion in debt, leaving plenty of ammunition for share buybacks. And its main competitor, AMD, is having trouble even turning a profit selling GPUs. Things are looking good for NVIDIA.