NVIDIA (NASDAQ:NVDA) and Advanced Micro Devices (NASDAQ:AMD) have long been battling it out in the discrete GPU market, but there's no question that NVIDIA has gotten the better of AMD. On a quarterly basis, the market share split between the two companies has been noisy, but looking at the past four years, it's clear that NVIDIA has been slowly consolidating its lead. 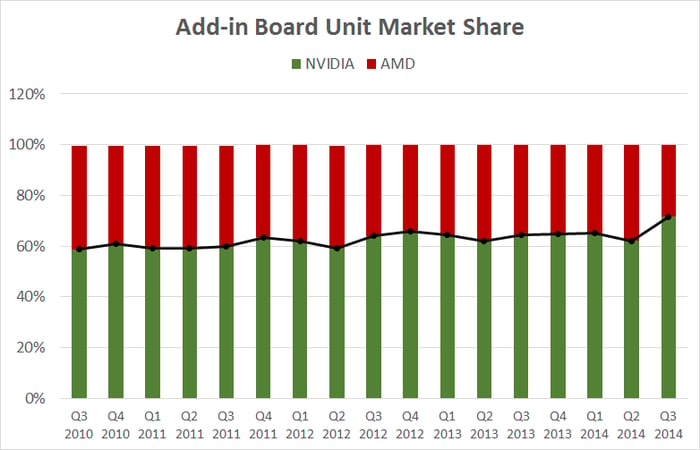 NVIDIA controlled more than 70% of the discrete GPU market by unit shipments in the third quarter of this year. With the recent launch of NVIDIA's GTX 970 and 980, which forced AMD to slash prices across the board, it doesn't look like NVIDIA will be giving up this share any time soon.

Why has AMD fallen so far behind? Can it possibly claw its way back?

A difference in strategy

NVIDIA has always been a company focused exclusively on graphics. ATI, NVIDIA's rival that was acquired by AMD for $5.4 billion in 2006, was the same way. The combination of AMD and ATI seemed like a good idea, allowing AMD to offer CPUs with integrated graphics in order to compete with Intel, as well as giving the company a big slice of the discrete GPU market.

But this strategy hasn't worked out for AMD. Its share of the CPU market has plunged. It went from being a major player in the server CPU market to almost non-existent, and has continued to lose ground to NVIDIA in the discrete graphics market. The problem is easy enough to understand: AMD had spread itself too thin, trying to compete with the much larger Intel on multiple fronts, as well as with NVIDIA in GPUs.

NVIDIA now spends more on R&D annually than AMD, despite the much broader array of products that AMD sells, and Intel outspends AMD by more than a factor of 10. The idea that AMD will someday be competitive with Intel again in the CPU market is starting to look laughable, and in the GPU market, NVIDIA appears to be pulling away.

Can AMD make a comeback?
The investment thesis for AMD during the past few years seems to be something along the lines of "AMD isn't doing well right now, but when it launches so-and-so product, it will blow Intel/NVIDIA away." This was the promise of AMD's APUs, which combined its CPUs with graphics that are more powerful than Intel's integrated graphics solutions. This has been the promise of every new graphics card that AMD has launched in the past few years, and the chart above shows that AMD has been losing ground, not gaining it.

The only thing keeping AMD afloat today, besides the hope that the future will be brighter, is its deal to supply the game consoles with SoCs, a lucrative endeavor, although it masks the weakness in every other part of AMD's business. AMD is still losing market share in the CPU market to Intel, despite Intel already having a near-monopoly market share, and it continues to lose market share to NVIDIA in the GPU market.

Despite rumors about AMD's upcoming graphics cards, which will supposedly blow NVIDIA out of the water, there's no reason to believe that these new cards will be any different than the last new cards AMD released. At this point, NVIDIA has a technical advantage, able to spend more on R&D, and push both performance and efficiency to new levels. All AMD has is hype, and that's just not enough.