Please ensure Javascript is enabled for purposes of website accessibility
Log In Help Join The Motley Fool
Free Article Join Over 1 Million Premium Members And Get More In-Depth Stock Guidance and Research
By Timothy Green – Apr 8, 2014 at 10:20AM

NVIDIA now spends more on research and development than rival AMD, and with the troubled competitor splitting its attention between different businesses, NVIDIA's lead in the PC gaming market is getting larger.

Shares of graphics chip company NVIDIA (NVDA 2.60%) have soared over the past year, rising about 50%, with sales of the company's high-end gaming GPUs making up for a weak PC market. The rise of mobile gaming and the new generation of game consoles haven't hurt the PC gaming market at all, and NVIDIA will continue to benefit from strong global demand for PC gaming products. While competition from AMD (AMD 1.77%) is a threat, a lack of focus from the troubled competitor gives NVIDIA an important advantage.

NVIDIA's edge in PC gaming
The gaming market generates revenue in excess of $100 billion per year, spread across game consoles, PCs, and mobile devices. While the launches last year of the Xbox One and PlayStation 4 created excitement around console gaming, the PC gaming market is actually larger than the console-gaming market. Much of this is thanks to the Asia Pacific region, where PC gaming is a nearly $15 billion industry, compared to just $3.9 billion in North America.

NVIDIA has benefited from the growing PC gaming market, with revenue from its GeForce gaming GPUs rising by 15% in fiscal 2014. This growth came during a continuing decline in the PC market as a whole, with NVIDIA specializing in one of the few areas that have remained immune to the PC sales slump. NVIDIA's share of the discrete GPU market has also been on the rise, with the company now commanding around 65% of the market. NVIDIA was nearly even with rival AMD back in 2010 in terms of market share, but the gap has been widening each year.

There are two reasons why NVIDIA has managed to pull so far ahead of AMD. First, while NVIDIA focuses solely on graphics and visual computing, AMD does CPUs and GPUs, as well as semi-custom deals like the game consoles. With AMD's focus spread between different businesses, it's no wonder that the more specialized NVIDIA has become the market leader.

Second, NVIDIA now spends more on research and development than AMD. In the last fiscal year, NVIDIA spent $1.336 billion on R&D compared to AMD's $1.201 billion, and the trends for the two companies couldn't be more different. 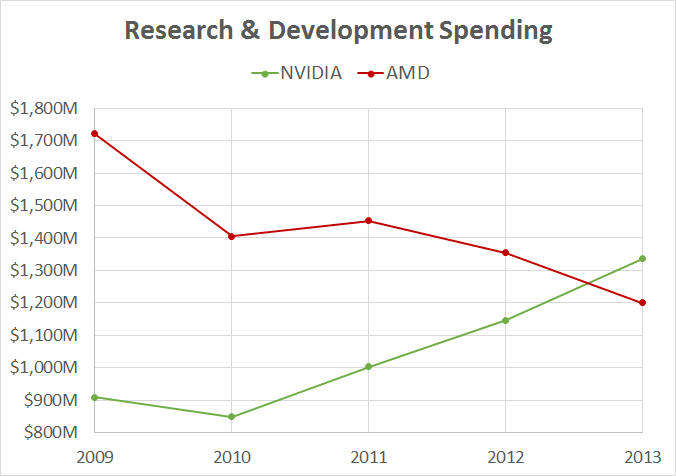 A company that continually slashes R&D spending is a company that falls behind its competitors, and with AMD attempting to compete in multiple markets, NVIDIA's lead may soon become insurmountable.

Going forward, there is one development that should help NVIDIA further grow its gaming GPU revenue in 2014 and beyond. The first GPUs built on the company's Maxwell architecture have been announced, and the focus on energy efficiency puts NVIDIA in position to dominate two portions of the PC gaming market.

The GTX 750 line of entry-level desktop GPUs was announced in February, and the cards manage to cut power consumption in half while doubling performance compared to NVIDIA's entry-level GPUs from three years ago. That's a quadrupling of performance per watt in just three years, and the lower power consumption makes these cards perfect for small form-factor PCs, such as the upcoming steam machines.

NVIDIA also expects the gaming notebook market to grow rapidly in 2014, and its new line of Maxwell-based notebook GPUs allow gaming notebooks to be thinner and lighter than ever before while achieving an acceptable battery life due to Maxwell's energy-efficiency improvements. NVIDIA's lower-end 840M notebook GPU triples the performance of Intel's integrated graphics while using nearly the same amount of power, making NVIDIA's discrete graphics cards a real option for midrange gaming notebooks.

The bottom line
With AMD slashing R&D spending while splitting its attention between different areas, NVIDIA has the opportunity to cement its status as the leading graphics chip company. The PC gaming market is growing despite weak PC sales, and NVIDIA's dominant market share is no accident.

Timothy Green owns shares of Nvidia. The Motley Fool recommends Nvidia. Try any of our Foolish newsletter services free for 30 days. We Fools may not all hold the same opinions, but we all believe that considering a diverse range of insights makes us better investors. The Motley Fool has a disclosure policy.