Less than a month after NVIDIA (NASDAQ:NVDA) announced its first desktop graphics processors based on the new Maxwell architecture, the first Maxwell notebook GPUs have been unveiled. The main improvement brought by the Maxwell architecture is energy efficiency and, while this is nice for desktop systems, it's critical for notebooks. The notebook market, as a whole, has been declining during the past few years, but the gaming notebook market has exploded, and NVIDIA expects big things in 2014. Based on the information supplied by NVIDIA about its new line of GPUs, I don't doubt it.

Finding a balance
On desktop gaming PCs, power consumption doesn't really matter. But in notebooks, lower power consumption leads to a longer battery life. This means that notebooks with discrete graphics cards typically don't last very long while running on battery. Integrated graphics from Intel (NASDAQ:INTC), and APUs from AMD (NASDAQ:AMD), while offering lower graphics performance compared to discrete graphics, also use less power and generate less heat. This makes them attractive for low-end gaming notebooks, where most games can be played on low settings; but to even come close to the performance of a desktop gaming PC, a discrete GPU is required.

To illustrate this point, NVIDIA included the following slide in its presentation announcing the new 800M line of mobile graphics cards: 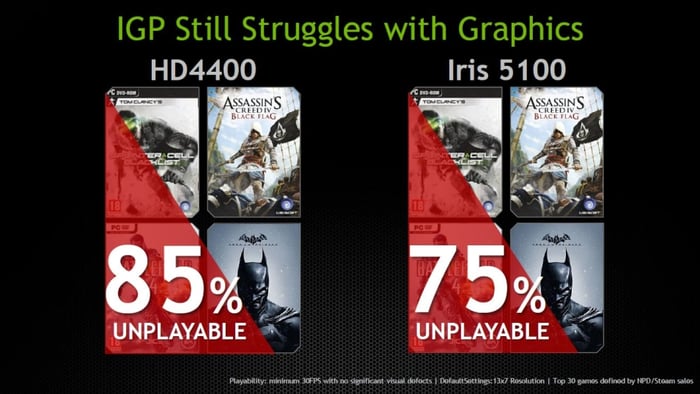 Using Intel's HD4400 integrated graphics, which comes with some of the latest Haswell CPUs, 85% of the 30 top-selling PC games are unplayable at a resolution of 1366x768 on default settings. Using the Iris 5100, a beefed-up version of Intel's graphics, 75% of these games are still unplayable.

While Intel has greatly improved the performance of its integrated graphics during the past few years, it's still not capable of providing enough performance to play modern games at reasonable settings. With laptops increasingly shipping with higher-resolution screens, 1080p and beyond, it's clear that Intel's integrated graphics are still not nearly good enough for gamers.

Performance isn't everything
In the past, notebooks with a discrete GPU capable of providing good gaming performance were thick, bulky, and had terrible battery life. NVIDIA points out that, in 2011, a standard high-end gaming notebook was more than two inches thick. Today, using NVIDIA's new GPUs, that number has dropped to about 0.8 inches, while providing 30% greater performance at the same 1080p resolution. For comparison, a MacBook Pro with Retina display is 0.71 inches thick.

Battery life has also been a big problem, with high-end gaming laptops lasting an average of around 50 minutes under heavy load. Battery Boost, a new technology included in NVIDIA's new GPUs, is an attempt to solve this problem. It manages both the GPU and the CPU, tweaking frame rates and clock speeds automatically in order to make sure that no computing power is wasted. NVIDIA claims that this will increase battery life by about 50%; independent testing puts the battery life gains at 42%.

Battery Boost is only included with the higher-end GPUs from NVIDIA, but those will be in the systems that need it most.

What this means for the gaming notebook market
At the high end, an Intel CPU paired with an NVIDIA GPU is the de facto standard for gaming notebooks, and that's not going to change any time soon. High-end gaming PC companies like Alienware, Razer, and Origin, as far as I can tell, don't offer any systems at all containing AMD parts. There's a good reason for this -- AMD's CPU performance is weak compared to that of Intel. At the high-end of the market, there's simply no way that AMD can compete.

AMD's Kaveri line of APUs, while still suffering from weak CPU performance, promise greater graphics performance compared to Intel's integrated graphics, and even low-end discrete graphics cards. Notebook versions haven't launched yet, but, at least on paper, they should offer a middle ground between the poor-performing integrated graphics, and the more power-hungry and expensive discrete graphics.

NVIDIA's new lower-end GPUs pose a problem for AMD, however, and here's why: 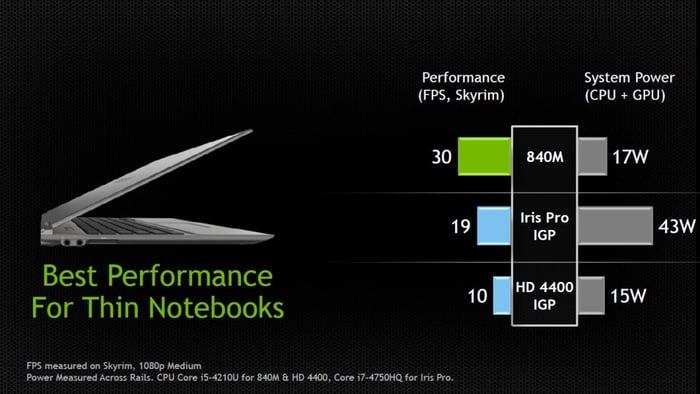 The 840M, one of NVIDIA's new lower-end GPUs, provides triple the performance of Intel's HD 4400 integrated graphics. That's not surprising; but what is surprising is the power consumption. While the integrated system uses 15 watts of power, the discrete system uses just 13% more power at 17 watts. This 200% performance gain for a 13% increase in power consumption shows the real benefit of the Maxwell architecture. Oddly, Intel's higher-end Iris Pro integrated graphics uses a staggering 43 watts of power, and still can't match NVIDIA's performance.

AMD's Kaveri notebook APUs will certainly provide greater graphical performance than Intel. But with NVIDIA's discrete graphics providing playable frame rates at 1080p using barely more power than Intel's integrated graphics, it may make more sense for many to go with an Intel+NVIDIA configuration instead of AMD, especially considering that AMD's CPU performance is lacking. NVIDIA's new GPUs make a serious play for the lower end of the gaming notebook market. If NVIDIA's numbers are close to correct, then AMD's Kaveri may not be the panacea that investors were hoping for.

The bottom line
NVIDIA's new line of notebook GPUs secures its dominance at the high-end of the gaming notebook market, while making systems with discrete GPUs compelling at the lower end of the market. The gains in energy efficiency is the real story. While we'll have to wait for independent benchmarks to see how close NVIDIA's numbers are to reality, NVIDIA has the potential to pick up significant market share in the fast-growing gaming notebook market.