With first-quarter earnings results on the books and annual reports filed, this time of year is a perfect opportunity to turn a critical eye to current trends in the market.

Bank stocks, for example, have performed quite well over the past two to three years. Will that trend continue?

How we got to where we are
Banks were at the heart of the real estate bubble and subsequent financial crisis, which is why bank stocks were hammered as the crisis played out.

But from that nearly ruinous period of time, banks have rebounded strongly. As is so often the case in the market, the industry that was punished the most severely is now bouncing back with equal vigor. See for yourself: 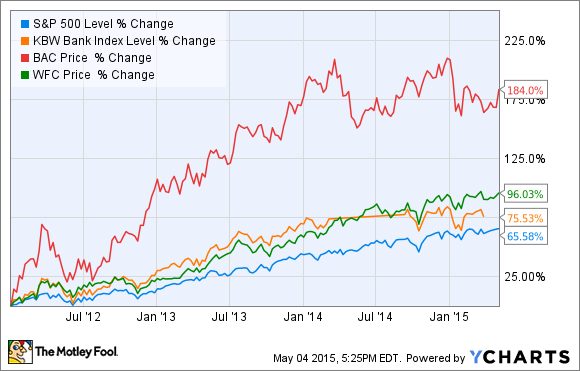 Nearly across the board, bank stocks have beaten the market since 2012. You'll notice Bank of America is the obvious outlier, a testament both to the progress CEO Brian Moynihan has made and to the depths to which the bank's stock fell.

According to data from the FDIC's Quarterly Banking Profile, the rebound in bank stocks is supported by much improved operating fundamentals. Profits have rebounded, the industry is growing, and banks have less leverage on their balance sheets than they've had in at least 30 years. And all that has been accomplished despite new regulations, a nearly zero-interest-rate environment, and a slow-growth economy.

The macro-level trends do indeed look positive for banks on a fundamental basis. Business is bank to normal, and by most assessments, the industry is as prepared as it could be for a potential economic slowdown in the future.

What's the market's view of bank stocks?
For investors, it's not quite enough for the banks to be fundamentally sound. Mr. Market must also value the stocks attractively, providing a margin of safety and some continued upside.

This is where our analysis gets a little bit tougher.

At the megabanks, the first quarter was a mixed bag in terms of market expectations. JPMorgan Chase (NYSE:JPM) and Wells Fargo (NYSE:WFC) both beat earnings estimates while delivering strong quarters for their shareholders. JPMorgan benefited from ongoing cost-cutting initiatives, while Wells saw a surprise uptick in revenue that pushed earnings higher than anticipated.

Bank of America, on the other hand, fell short of Wall Street expectations as lower legal costs failed to produce the savings investors hoped to see. The bank's results were improved year over year, but not as improved as analysts had wanted.

In terms of valuation metrics, the industry continues to build in a discount at most of the larger banks that takes into account uncertainty in the regulatory and "too big to fail" landscape. That said, the market is still willing to award premium prices to banks performing at a high level.

So is it time to sell bank stocks?
If you own a bank stock that has done well because of solid fundamentals, growth, rising profits, and an efficiently run operation, then the current data isn't convincing enough to justify selling just yet.

However, if an honest assessment of the bank's share price performance leaves you scratching your head, now could be a good time to get out of that stock and reallocate your funds to a higher-performing institution.

There's nothing wrong with riding a rising tide, but it's always best to prepare for when the tide starts to turn back.