Gilead Sciences (NASDAQ:GILD) has a problem. Namely, the market doesn't believe in the sustainability of its record-breaking hepatitis C franchise composed of Sovaldi and Harvoni.

Despite hauling in roughly $4.5 billion in sales for the two drugs in the first-quarter, for instance, Gilead's shares are still trading well below their 52-week highs: 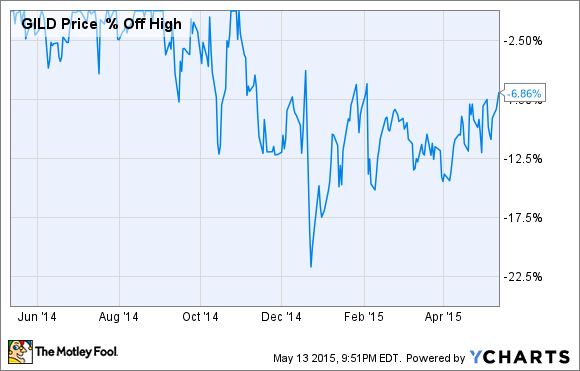 Gilead has thus become one of the cheapest stocks in the entire healthcare sector due to this divergence between its share price and skyrocketing revenues: 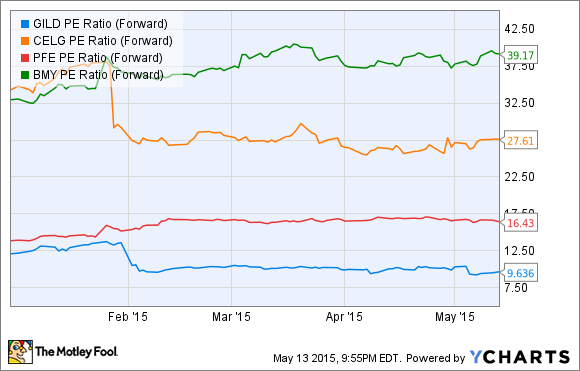 To resolve this apparent dichotomy, analysts believe the biotech needs to use its mountain of cash ($14.5 billion to be exact) to make a big splash on the M&A scene.

The twist in the story, though, is that the Street is looking in completely the wrong place for potential buyout targets, prompting some funny quips from Gilead's EVP Paul Carter at the recent Bank of America Healthcare Conference.

Specifically, the rumor mill has suggested that Gilead might pursue large-cap companies such as Celgene (NASDAQ:CELG) or Vertex Pharmaceuticals (NASDAQ:VRTX) as a way to build out its oncology pipeline. But such large acquisitions simply don't match the biotech's history of M&A activity.

Gilead's more likely move...
My view is that the Street is indeed correct in that Gilead will go after additional oncology assets. But it's wrong about the size of the forthcoming deals.

Gilead has a history of gobbling up small, early-stage companies where it can use its proven capabilities of accelerating the development of promising drug candidates.

In two of its latest acquisitions, for example, the company bought out Phenex Pharmaceuticals and EpiTherapeutics. The common theme is that the bulk of their respective pipelines were in either preclinical studies or early-stage human clinical trials at the time of the acquisition.

Armed with this insight, I'm speculating that Gilead's next target will be the tiny cancer immunotherapy company Bellicum Pharmaceuticals (NASDAQ:BLCM). Here's why.

Bellicum is an underappreciated player in the immunooncology space
Immunooncology treatments are expected to become the standard of care for many cancers by 2030, growing their market share to an estimated $50 billion within the next 15 years. Although Gilead has repeatedly stated that oncology is going to be an important area for the company moving forward, it lacks a clear presence in this critical part of the market.

Bellicum Pharmaceuticals would thus fill a major gap in Gilead's oncology pipeline, and perhaps give it one of the most compelling immunooncology platforms in development right now.

Bellicum's platform consists of next-generation hematopoietic stem cell transplantation, or HSCT, and CAR-T cell therapy. While these approaches have been plagued by safety and efficacy problems in the past, the company has developed a molecular switching mechanism that allows these cells to either ramp up their therapeutic efforts, or undergo programmed cell death, if a patient begins experiencing a severe adverse event.

From an acquisition standpoint, Bellicum would fit almost perfectly with Gilead's interests in hematology and oncology. Given that nearly all of Bellicum's product candidates are in preclinical studies or just now entering clinical trials, it would also match the biotech's desire to take control of a clinical program at an early stage: 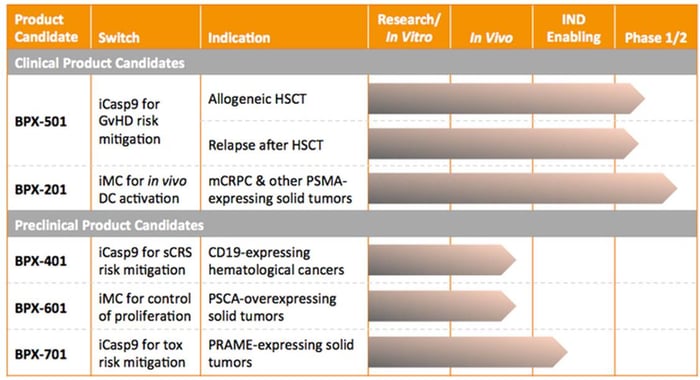 What's next?
I think Gilead is ultimately going to acquire multiple small to midsized companies, giving the biotech the chance to spread the risk, so to speak. That said, Bellicum looks like a natural extension of Gilead's previous M&A activity, and it would fill a pressing need (immunooncology).

Bellicum's market cap has also remained within reason when compared to some of its closest CAR-T peers like Kite Pharma and Juno Therapeutics. But that's mostly because Bellicum is a tad behind these other players in terms of the clinical progress of its lead product candidates.

Put simply, Bellicum looks ripe for a buyout now -- before it begins churning out clinical trial data that could send shares soaring later on.