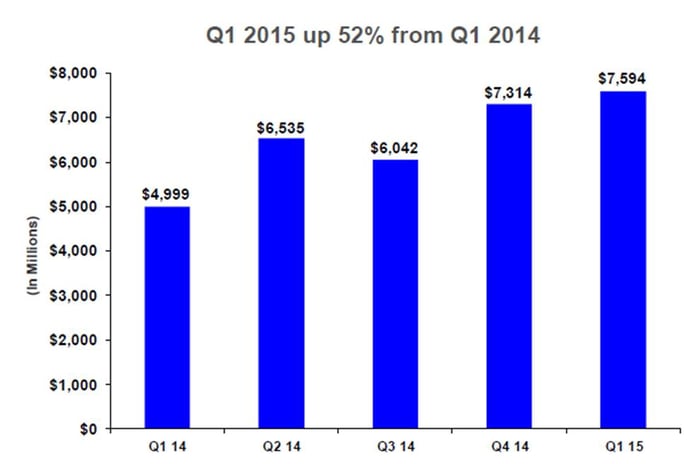 Not surprisingly, most of this growth came from the company's hepatitis C franchise of Harvoni and Sovaldi, which generated $4.55 billion in sales during the three-month period.

Despite several consecutive quarters of crushing the Street's estimates, though, Gilead's share price has under-performed the high-flying biotech industry as a whole: 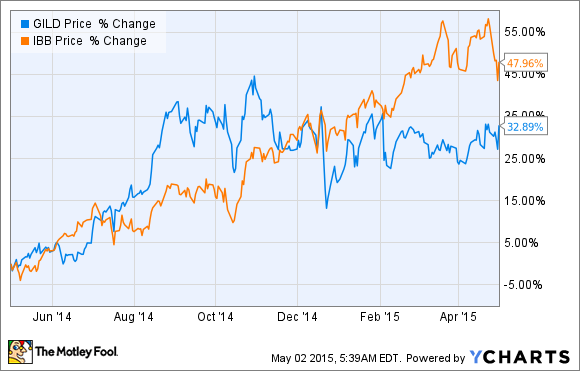 The confluence of a flagging share price and improving fundamentals has thus transformed Gilead into one of the absolute cheapest large-cap biopharma stocks, shown by its 12-month, trailing price-to-earnings ratio relative to its peers: 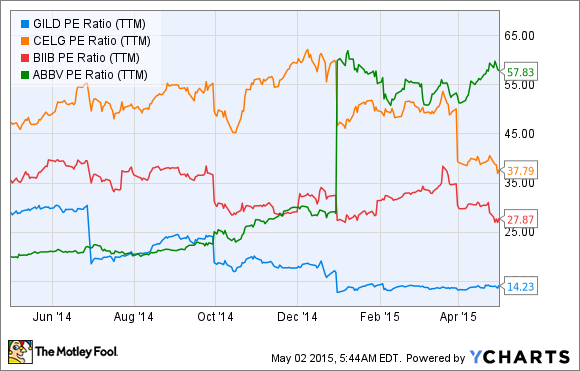 So why is the Street assigning Gilead such a conservative valuation in light of its supercharged growth profile?

I think the dynamics of the hep C market (Gilead's biggest revenue driver) shed significant insight on this seeming disconnect between the company's revenue growth and the performance of its share price. Here's why.

The hep C market may not be sustainable over the long term
On a global basis, the number of hep C infections is staggering. A recent conservative estimate suggested that 80 million people around the world are presently afflicted with the hep C virus. Higher-end estimates, on the other hand, place this figure closer to 185 million. The point is that hep C is undoubtedly a large, underserved market.

However, the bulk of the value of the hep C market, from a business perspective, is located within markets such as the EU and the U.S., where infection rates have been dramatically declining for decades.

Because of better screening procedures during blood transfusions since the 1990s and the recent advent of powerful new treatments like Sovaldi/Harvoni, these vital markets could disappear within the next decade, casting doubt on the duo's long-term sustainability in terms of value creation. Simply put, we may be seeing the high water mark of Gilead's hep C franchise right now -- at least that's what the market appears to be forecasting based on Gilead's staggeringly low price.

What's next?
If you watch biotech and biopharma stocks for long enough, you will almost certainly arrive at the conclusion that companies with deep interests in the field of oncology are the ones that garner the highest premiums. Celgene, for instance, is no stranger to a multiple of nearly 40.

And then you have all of the clinical-stage oncology specialists such as Kite Pharma and Juno Therapeutics, among many others, that trade at mind-blowing valuations based on their real-world prospects of ever bringing an actual drug to market.

Leaders in the infectious-disease space such as Gilead, by contrast, rarely trade at frothy valuations.

What's the difference? The sad fact is that cancer rates in general are climbing worldwide, and it's highly unlikely that any new drug or therapy can put a significant dent in this trend. Sovaldi, and drugs like it, however, are their own worst enemy in a way, given that they destroy their own markets by being functional cures.

That's why I'm starting to suspect that Gilead might bolster its oncology pipeline via an acquisition soon. While there's a lot of speculation that the biotech will pursue companies developing either hep C or HIV treatments, I think investors need to broaden their expectations to include a cancer-drug maker. After all, Gilead has already shown an abiding interest in oncology drugs with the development of Zydelig, and this may be a harbinger of things to come.

What companies might Gilead target? Aside from privately held companies that probably offer more compelling valuations at present, I think Ariad Pharmaceuticals and Seattle Genetics are two viable candidates within the publicly held arena.

My belief is based on the respective outlooks for their robust clinical pipelines that are targeting several high value indications, combined with their reasonable market caps. Gilead could thus pay cash for both of these companies and still have plenty left over for additional acquisitions, making them fairly low-risk assets that would significantly augment the biotech's fledgling cancer pipeline.