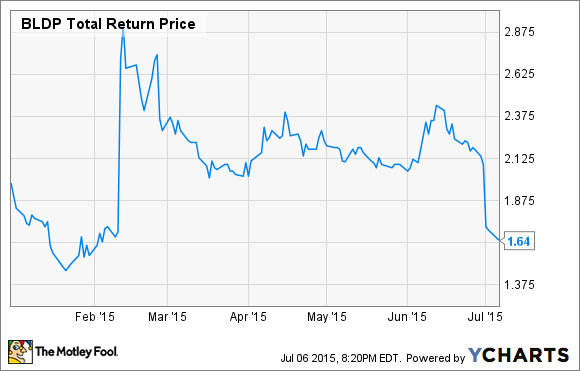 Summer is here, school is out, and across America, thousands of vacationers are heading to the amusement park to ride the roller coasters. Other Americans prefer to invest in Ballard Power (BLDP -2.62%) stock... which, as it turns out, can be just as thrilling a ride.

Entering into 2015 at about $2 a share, Ballard didn't take long to gain nearly 50% -- a move precipitated by Ballard's announcement that it will sell certain automotive fuel cell patents to Volkswagen and Audi. Later -- July 1, in fact -- Ballard announced that it will capitalize on its now-popular stock's price strength by selling a follow-on offering of 8.125 million shares to raise cash for us in the "acquisition of, or investment in, companies, technologies, products, or assets that complement Ballard's business."

What goes up must come down
Investors who had bid up Ballard stock on the Volkswagen/Audi news in February moved just as abruptly to sell off Ballard stock after the share-issuance announcement. As of this writing, Ballard shares that sold for $2.09 the day before the floatation was announced are worth just $1.64 a share -- down 22%.

Ballard dilutes -- who gives a hoot?
Actually, it may be more than fair -- to Ballard. After all, according to the company's July 1 press release, the 8.125 million new shares it is floating will price on Tuesday, July 7, at only $1.60 apiece. So even after the stock's abrupt fall last week, existing shareholders are still getting the short end of the stick, relative to what new investors get to pay.

The unfairness to existing shareholders is made more apparent when you note that they now own significantly less of Ballard's equity than they did one week ago. You see, the 8.125 million shares now coming on market, when added to the 132.6 million shares already outstanding, will dilute existing shareholders by at least 6.1%. If Ballard's underwriters exercise their overallotment option (that is, buy more shares than initially planned), the dilution could rise to 7% -- 9.344 million shares.

Put another way, if you owned enough shares to control a 10% stake in Ballard before the dilution, then after the dilution you'd own only a 9.3% stake in the company -- because while the number of shares you own hasn't changed, the number of total shares in existence has grown.

Hoots... and jeers
Adding insult to the injury of stock dilution, simultaneously with declaring its share floatation, the company warned investors that its second-quarter revenues will fall short of the $11.8 million that analysts were expecting. Indeed, with revenues now estimated in a range from $10.6 million to $11.5 million, Ballard will miss the mark by about 6% at the midpoint.

And profits? Surely you jest. Ballard Power hasn't earned a net profit since 2008 -- and before that hadn't earned a profit since 1998. According to S&P Capital IQ, the company has racked up combined losses of $1.11 billion since 1993 -- an impressive feat for a company valued at less than $220 million in market cap. And the last time Ballard generated positive cash from its operations was in1994 -- when it generated roughly $100,000 in cash and then had to spend $1.9 million on capital investment.

Maybe they just can't resist the thrill of riding the roller coaster.

Rich Smith does not own shares of any company named above. (But maybe you had already guessed that?) He isn't short any stock named above, either. You can find Rich on Motley Fool CAPS, publicly posting his stock picks and pans under the handle TMFDitty, where he's currently ranked No. 317 out of more than 75,000 rated members.