What: Shares of handbag maker Kate Spade & Co (NYSE:KATE) were getting tossed aside last month, falling 13% according to data from S&P Capital IQ. 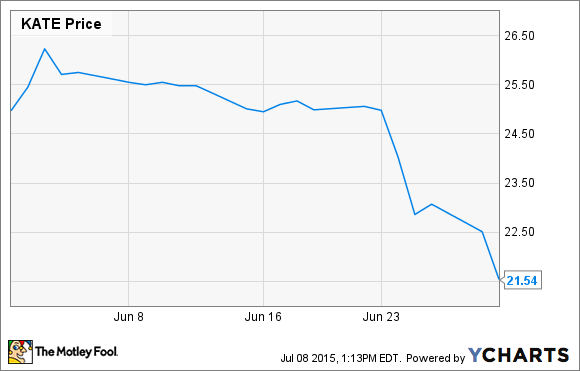 So what: As you can see from the chart above, the majority of the drop came toward the end of the month. While there was no major news pressuring the fashion label, the decline seemed to be a continuation of May's poor performance, as the stock dropped 25% in that month due to a first-quarter earnings report that was weaker than expected. Kate Spade stock had been pumped up nearly three times its value in the three years prior, and shares have been tumbling since the report.

The affordable luxury specialist has also been a victim of weakness in the overall industry as rivals Michael Kors and Coach have also come up short in recent earnings reports, and all three have sold off sharply over the last three months. 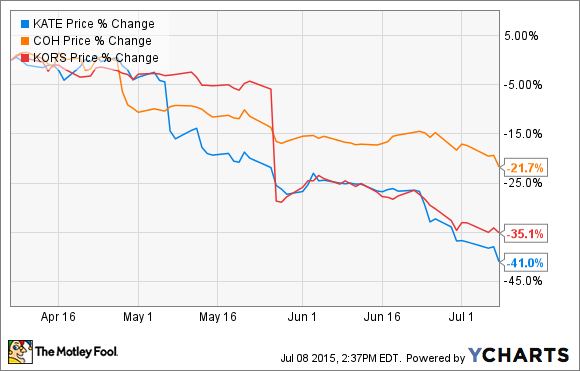 Investors seem to believe consumer tastes are moving away from that niche group of handbag makers based on the sell-off across the sector. Michael Kors in particular has taken a big hit as same-store sales fell 7% in its latest quarter, surprising the market.

Now what: Kate Spade is still showing off healthy growth; sales jumped 28% in its most recent quarter. However comparable sales have slowed to the single digits, and even the usually robust direct-to-consumer segment increased just 9% in its last quarter. The recent pullback in the stock seems to be mostly valuation-based, but the stock is still pricey at a P/E close to 40 based on this year's estimated earnings.

Concerns about peers such as Coach and Michael Kors won't help Kate Spade's prospects, but Spade is in a better position than the other two. As long as comparable sales are moving higher, the company should be able to justify its continued expansion. But it risks meeting the fate of Michael Kors, whose rapid addition of stores seemed to dilute the brand, leading to a decline in same-store sales.

Keep an eye on that figure for Kate Spade in upcoming quarters. With shares now at a 52-week low, the stock could be a bargain if the company can execute on its growth plans.