Please ensure Javascript is enabled for purposes of website accessibility
Log In Help Join The Motley Fool
Free Article Join Over 1 Million Premium Members And Get More In-Depth Stock Guidance and Research
By Steve Symington - Jul 8, 2017 at 8:00AM

Shares of Coach Inc. (TPR -3.57%) have climbed 36.2% so far in 2017, according to data provided by S&P Global Market Intelligence, thanks to a combination of the company's latest strong quarterly report and its subsequent move to acquire competitor Kate Spade & Company (KATE).

To be fair, Coach stock had already enjoyed a decent start to the year, gradually drifting around 12% higher through the end of April with the help of a reasonably solid holiday-quarter report in late January. But then shares jumped more than 17% in the month of May, including an 11.4% single-day pop on May 2, 2017, after Coach's fiscal third-quarter results (for the period ended April 1) demonstrated encouraging progress in the company's ongoing turnaround. 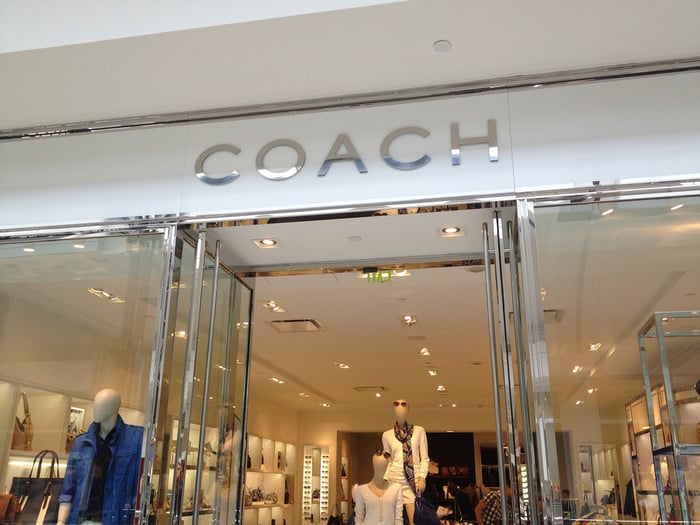 More specifically, Coach's revenue last quarter declined 4% year over year to $995 million. But that was also in line with expectations as Coach strategically closed certain stores and reduced promotional events in an effort to bolster its brand positioning. To be sure, Coach saw a 3% increase in comparable-store sales for its North American business, even despite an unfavorable shift in the timing of Easter this year.

If that weren't enough, the following week Coach continued to rise after it announced an agreement to acquire Kate Spade & Company for $18.50 per share in cash, a deal that values its competitor at $2.4 billion. Coach CFO Kevin Wills noted the "complementary nature" of the two businesses will allow them to realize roughly $50 million in annualized synergies within three years of the deal's closing, through a combination of greater scale, inventory management, and operational efficiencies.

At the time of the original acquisition announcement, Coach predicted the transaction would close some time in the third quarter of this calendar year.

It's worth noting, though, that Coach has since extended the expiration of its tender offer to purchase all outstanding shares of Kate Spade stock by roughly two and a half weeks, to July 10, 2017. This shouldn't be cause for alarm, however, as Coach insists the original terms and conditions for the acquisition remain unchanged. Rather, Coach extended the deadline for this step to satisfy the waiting period under the Japanese Act on Prohibition of Private Monopolization and Maintenance of Fair Trade. That waiting period is expected to expire on July 2, 2017.

In any case, once Coach completes the acquisition, it might well add fuel to the fire of its turnaround, especially if the company delivers another strong quarterly report when it next announces results in early August. For now, investors should be more than happy with where Coach stands.