Coach (NYSE:TPR) emerged victorious in its pursuit of Kate Spade (NYSE:KATE) on Monday. Coach will be acquiring the smaller designer-handbag distributor in a $2.4 billion transaction that cashes out Kate Spade investors at $18.50 a share.

The market likes the deal. Shares of Kate Spade rose 8.3%, within 1% of the buyout price. More importantly, Coach stock was bid up 4.8%, validating the premium it will pay in scooping up Kate Spade.

Lost in Monday's rally was Michael Kors (NYSE:CPRI). Its stock rose a pedestrian 0.4% on the day, even though among the three parties, it could wind up being the biggest winner. 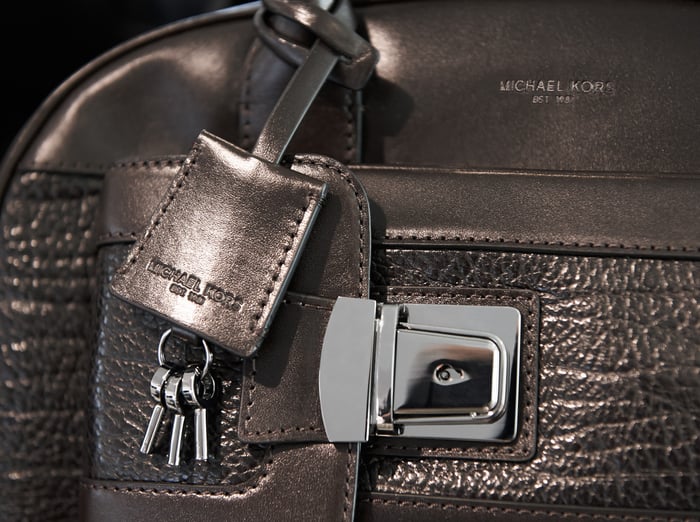 Sizing up the future prospects of all three players is fairly straightforward when it comes to Kate Spade. There's just 0.7% of upside from Monday's close to the takeout price, unless a bidding war breaks out -- which remains unlikely at this point. If things play out as planned, it would be a lousy return on Kate Spade until the deal's expected closing in September.

Now let's size up Coach vs. Kors. Both companies stand to benefit from the purchase. Coach is getting a popular brand, but ultimately it's eliminating a competitor. One of the things Coach execs noted on Monday is that it will scale back the online flash sales that Kate Spade would have, offering steep discounts that Coach believes was cheapening the brand. At the end of the day, it will translate into less markdowns in designer handbags, something that will benefit Kors without its having to shell out $2.4 billion to take out a smaller competitor.

Jefferies analyst Randal Konik chimed in on the deal shortly after it was announced on Monday, suggesting that it's a good thing for Michael Kors. Coach's gobbling up of Kate Spade allows Kors to focus on its brand turnaround instead of having to integrate another brand into its bloodstream. The money Coach is spending on Kate Spade would be better put to use at Kors with stock buybacks, and Konik suggests that Kors can repurchase nearly half of its shares over the next few years.

Michael Kors had grown its top line faster than Coach every single year until fiscal 2017. Coach is rebounding better than Kors these days, but it's also working on depressed levels. The three-year annualized revenue growth rate is 15.7% at Kors and negative-2.7% at Coach.

Coach is doing Kors a favor by acquiring Kate Spade. It's taking a hit for the team in a game where all the players may ultimately win.