What's happening: After reporting its second quarter financials, shares in bluebird bio (NASDAQ:BLUE) fell for a second day today, dropping by 10.08% in the session.

Why it's happening:  Bluebird bio has -- up until recently -- been one of biotech's brightest shining stars. After beginning the year at $91, enthusiasm for its sickle cell disease and beta-thalassemia major R&D program pushed shares to nearly $200. However, shares have fallen considerably from their peak with today's move pushing them to below $140. 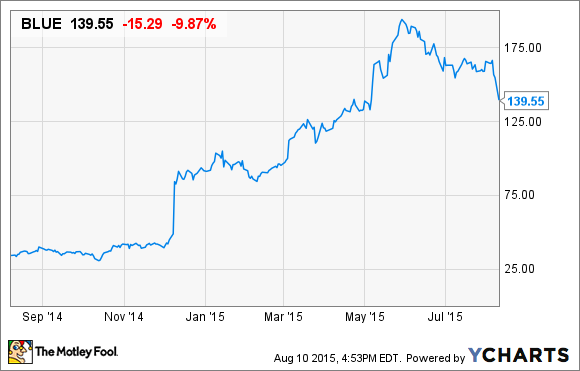 One reason for the drop last quarter is the scaling back of a collaboration deal with Celgene in June.

Previously, Celgene was collaborating with bluebird bio on the development of CAR-T therapies that reengineer a patient's immune system to better detect and kill cancer cells. However, in their new collaboration Celgene will no longer be working with bluebird bio on CAR-Ts, choosing instead to partner up with Juno Therapeutics CAR-T platform in July.

Celgene is still working with bluebird bio on anti-BCMA therapies targeting a cell surface protein expressed in myeloma cells, but the narrowing of its collaboration reduces the perception that Celgene might swoop in to acquire bluebird bio while also pressuring bluebird's R&D budget.

But there's still plenty to like about bluebird bio.

After meeting with regulators earlier this year, bluebird bio announced plans to pursue a conditional approval for its beta-thalassemia drug Lentiglobin BB305 in Europe and to seek accelerated approval in the U.S. for the drug following the completion of its studies.

If Lentiglobin eventually wins over regulators it could mark a significant improvement in patient treatment that could lead to blockbuster sales. Currently, treating the 15,000 or so beta-thalassemia patients in the U.S. and EU involves lifelong blood transfusions, and that has some analysts predicting peak sales could reach $4 billion per year for this drug.

If that sky-high projection proves correct, then it would go a long way to justifying bluebird bio's pricey R&D program. Last quarter, bluebird bio spent $44.3 million developing its pipeline. Regardless, since the company successfully completed a secondary offering when shares were north of $170 that increased its cash stockpile to $936 million, there's little short term financial risk and that could mean that shares will find their footing once investors gain more insight into the timing of Lentiglobin BB305's filing.