Special-situations investing describes when stocks experience some kind of corporate event that might lead the market to revalue them, and that leads investors to consider buying shares in anticipation of the valuation change. General Electric Company (NYSE:GE), Danaher Corporation (NYSE:DHR), and Johnson Controls (NYSE:DHR) are all in the process of spinning off businesses and restructuring their companies. As such, they will all look fundamentally different in the next year or so. However, I believe that the former two have a good chance of outperforming the market, while Johnson Controls has more downside risk. Here's why.

The stock is a special-situations investment because management is busy transitioning the company toward generating 90% of its earnings from its industrial business by 2018. As such, the investment case for the stock largely rests on the successful execution of three parts of its program in the next few years:

The company appears to be on track with most of these objectives. For example, the pace of its GE Capital asset sales is expected to pick up in the second half of the year. Indeed, Goldman Sachs recently agreed to buy an online bank from GE Capital.

Moreover, as I've written previously, Chairman and CEO Jeffrey Immelt has already upgraded expectations for cost savings from the Alstom purchase by $1.8 billion, to a total of $3 billion by the fifth year of the deal. The Alstom deal hasn't closed yet -- as of this writing, it's still awaiting regulatory approval from the EU -- but it's a good sign that cost synergies are likely to be greater than originally expected.

Meanwhile, the company has three key new technologies with which it intends to grow its industrial business, and long-term opportunities from increasing its industrial services growth, partly through its investment in the industrial Internet.

In addition, the market has focused on the impact of low energy prices on the company's oil and gas businesses, but if gas prices stay low, it could lead to increased usage and investment in gas turbines -- a far bigger business for General Electric. In a nutshell, the current backdrop looks positive, and the transformation of the company is on track.

The post-separation Danaher will therefore be made up of a collection of high-gross-margin businesses, with the bulk of revenue in relatively noncyclical end markets -- the benefit being that Danaher should find it easier to raise capital to fund growth-enhancing acquisitions, which is key to Danaher's business model.

Meanwhile, the new company, called NewCo, will comprise Danaher's existing industrial businesses as well as its test and measurement operations. Management believes the company will have "an outstanding margin profile and tremendous free cash flow generation, allowing it to accelerate its revenue and earnings growth trajectories while providing flexibility in capital deployment." In other words, the free cash flow generation will aid NewCo's future acquisition strategy.

In a nutshell, investors are looking forward to a continuation of Danaher's core business model, and the split should allow both companies to pursue acquisitions.

Johnson Controls
The special situation here is the intended spinoff of the Automotive Experience segment, dealing in automotive seating and interiors. Once the spinoff takes place, the company will be more balanced, with the remaining combination of Power Solutions (automotive batteries) and Building Efficiency (heating, ventilation, and air conditioning).

In common with the new Danaher, the new Johnson Controls is likely to be seen as a less cyclical company, simply because automotive seating and interiors is a highly cyclical industry. However, I have three concerns with Johnson Controls.

First, expectations for automobile production in China, a key market for Johnson Controls, have been scaled back, with companies such as BMW cutting production and openly discussing reducing profit expectations. Indeed, the China Association of Automobile Manufacturers recently reported that the production and sales of automobiles in China rose just 0.8% and 0.4%, respectively, in the first seven months of 2015.

Second, as I discussed previously, Johnson Controls is increasing head count in its Building Efficiency segment in expectation of a pickup in its core institutional demand. This is good news, provided the institutional market continues to improve, but it leaves the company exposed to higher costs if there's a slowdown. 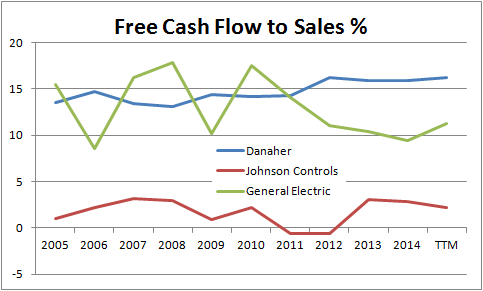 Management is targeting $1.5 billion in free cash flow for 2015, which puts the company on a forward enterprise value (that is, market cap plus net debt)-to-free cash flow multiple of around 25. That's hardly cheap.

The bottom line
All three companies have good rationales for doing spinoffs, but given the current economic climate, Danaher and, to a lesser extent, General Electric look more favorably placed than Johnson Controls does to complete their objectives. In my opinion, on a risk-reward basis, the former make better investments right now.