Please ensure Javascript is enabled for purposes of website accessibility
Log In Help Join The Motley Fool
Free Article Join Over 1 Million Premium Members And Get More In-Depth Stock Guidance and Research
By Daniel Miller - Sep 23, 2015 at 11:08AM

Raytheon has proven it can increase earnings per share despite declining net sales, but what catalyst could propel net sales higher?

Raytheon (RTN) is an intriguing defense business that has been on my watch list for some time. The company offers technologically driven products for the defense industry. While some companies build bombs and missiles, Raytheon is the brains behind the operations -- think radars, sensors, communication equipment, algorithms, and security.

While international sales only represent about a third of total net sales and the recent U.S. government defense spending cuts have hindered Raytheon's net sales, the company has proven it can do more with less. 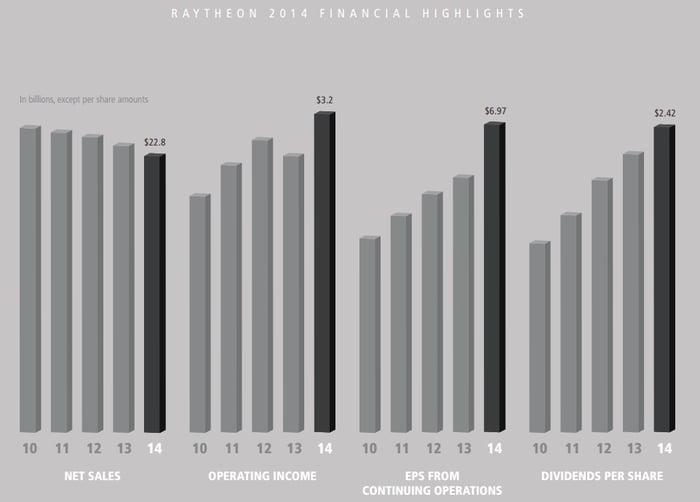 Let's take a look at how balanced Raytheon's business is and at one impending catalyst that I think can propel the company's stock higher over the next decade.

Here's how evenly the net sales and operating margins check in from those segments, through the first half of 2015. Now, within Raytheon's intelligence, information, and services segment is a catalyst right up the company's alley that could drive major profits over the next decade: cybersecurity.

Cyber attacks are becoming a serious problem, and despite defense budget cuts, the U.S. government is still expanding its cybersecurity capabilities. Here's a look at cyber incidents reported annually. 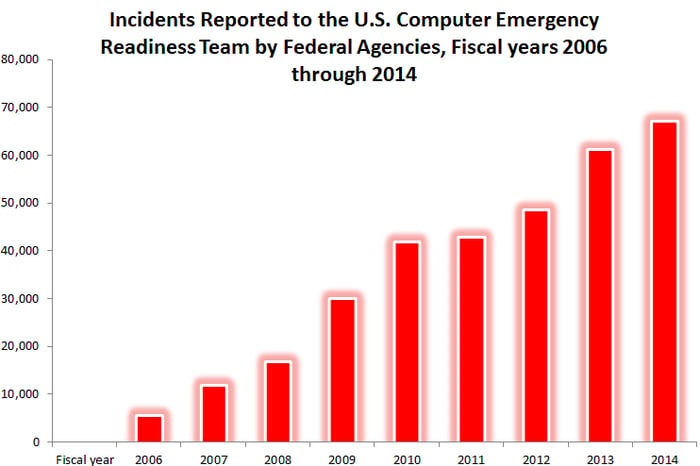 Don't take it from me
"Among the greatest concerns that impacts both military and civilian realms is cybersecurity," James G. Stavridis, Navy Adm., NATO's supreme allied commander for Europe and commander of U.S. European Command, told the Senate Armed Services Committee several years ago. "Today, we have a billion devices that are accessing the Internet. Our economies are entangled in this Internet sea, and it's an outlaw sea."

In PwC's 17th annual Global CEO Survey, 69% of U.S. executives reported being worried that cyber threats will impact growth. If nearly 70% of CEOs believe their company's bottom line will be negatively affected by cyber threats, cybersecurity is an extremely valuable business to be in going forward.

The threat is real and, according to analysts at Cybersecurity Ventures, the global cybersecurity market will grow from roughly $77 billion this year to an estimated $170 billion by 2020 -- that's a compound annual growth rate (CAGR) of nearly 10%, and some say that's a conservative estimate. Furthermore, according to their report, cybersecurity deals that are worth more than a million dollars have gone up by 40% year over year. These are the kinds of deals that Raytheon could soon be competing for.

How will Raytheon benefit?
Raytheon has clearly identified the opportunity after acquiring surveillance and cybersecurity company Blackbird Technologies for $420 million late last year. Not long after that, Raytheon snatched up Websense, a leader in key commercial cybersecurity markets with a strong and established brand, for roughly $1.9 billion. These two acquisitions, along with Raytheon's existing business, will combine to make one of the broadest cybersecurity portfolios in the industry.

The move to acquire Websense was a good one, even if the price was high, because Websense offers an extended reach to the commercial side while Raytheon has a strong presence in the government segment -- also, there are synergies between the two. 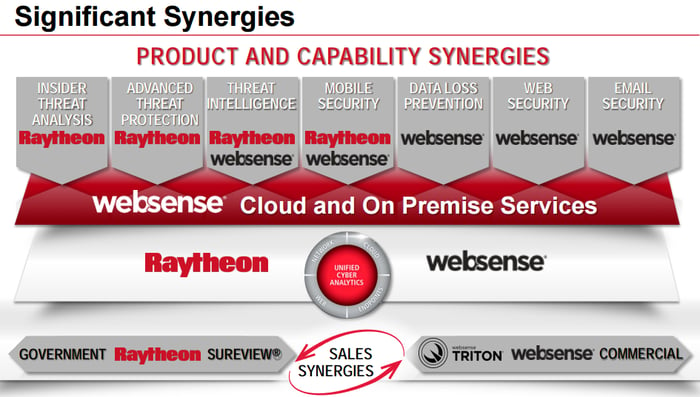 This is a long-term-minded move for Raytheon investors. The Websense acquisition will be accretive to 2015 non-GAAP earnings per share by roughly $0.06, according to Raytheon, and will grow as the company itself increases sales and as synergies between the two businesses are achieved.

While Raytheon is most known for its other military products, cybersecurity looks like a great opportunity for the defense company to grow its top and bottom lines over the long term. It's definitely a catalyst for investors to watch going forward.