Please ensure Javascript is enabled for purposes of website accessibility
Log In Help Join The Motley Fool
Free Article Join Over 1 Million Premium Members And Get More In-Depth Stock Guidance and Research
By Howard Smith - Mar 27, 2020 at 10:09AM

Divestitures will be required in three areas for merger to proceed.

The largest defense sector merger ever has received conditional approval by the Department of Justice. Announced last June, United Technologies Corp. (RTX -1.12%) and Raytheon Co. (RTN) are seeking to become a force in aerospace and defense in what both companies said is a merger of equals. The new company resulting from an all stock deal is to be called Raytheon Technologies Corp.

The Justice Department Antitrust Division filed a lawsuit, but proposed a settlement to allow the merger to proceed at the same time. The settlement specifies the divestiture of Raytheon's military airborne radios business as well as the optical systems and military global positioning systems (GPS) from United Technologies. 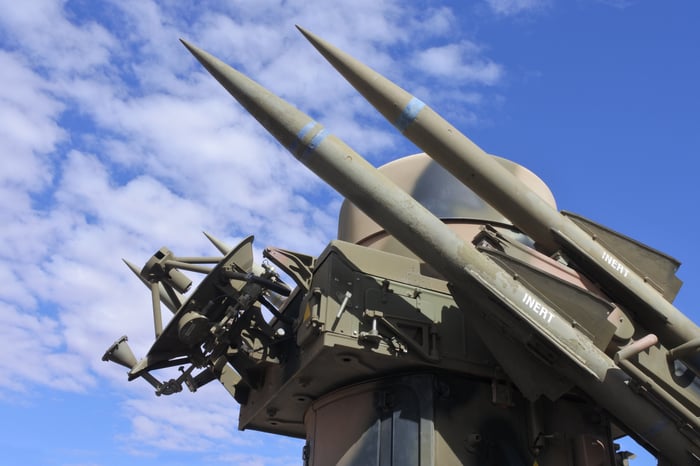 According to the Justice Department statement, the divestitures are required because the merger would combine the two main suppliers of military airborne radios and military GPS systems, effectively eliminating competition. It would also lessen competition in other items sold to the Department of Defense and the U.S. intelligence agencies.

Two facilities of Raytheon's airborne radios business must be sold, and United Technologies must complete the sale of its military GPS business to BAE Systems (BAES.Y 2.14%), which has offered to buy it. Alternatively, the businesses could be sold to acquirers "approved by the United States."

An additional requirement is for United Technologies to divest its optical systems business, located in Danbury, CT, to a similarly approved acquirer. The company also previously said it would spin off its elevator and air conditioner businesses. The companies expect the merger to be completed in the second quarter of this year.