Even though National Oilwell Varco's stock is priced for low expectations, the company's prospects may take longer to recover than an initial increase in prices.

When shares of a high quality business in an out of favor sector get pushed down by the market, it can sometimes provide the platform for that stock to have a great run immediately following. In the case of National Oilwell Varco (NOV 2.79%), the former part of that statement has happened. Over the past 18 months, shares of the company have declined close to 65%. 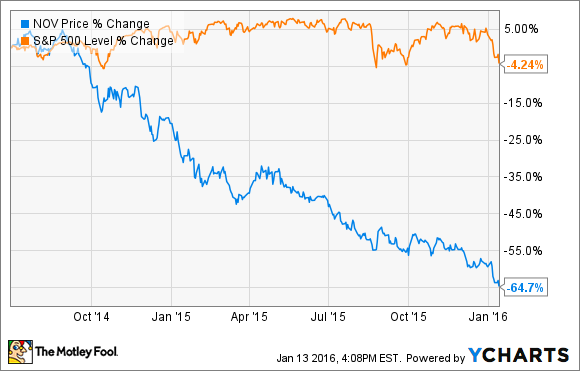 So with that much pessimism priced into the company's stock, can shares of National Oilwell Varco have a blowout year in 2016? Let's take a look at the business segments of the company to see how it will likely react to the market in the coming year.

Not a lot working in its favor
As a manufacturer and parts supplier to the oil and gas insdustry, some might assume that National Oilwell Varco has a pretty narrow scope. In reality, though, the company has a very diverse business, and those various segments will react differently to the market. Depending on where we are in the commodity cycle will greatly determine how these different business segments will perform in 2016.

Let's start with the company's business segments that are likely the first ones to rebound -- rig aftermarket and wellbore technologies. These two segments are most directly affected by overall drilling activity as rig aftermarket sells the spare & replacement parts for NOV built rigs in the field and wellbore technologies sells the basic equipment like drill pipe and drilling fluids to get a well done.

Once oil and gas prices start to climb again and there is an appetite to drill new wells, these two segments will be in high demand. This is especially true of the company's aftermarket business segment. For the past several quarters, rig owners have cut costs by cannibalizing its idle rigs, essentially stripping them of parts to repair the ones still active. As this inventory of used parts draws down, rig companies will need to replace the parts on active rigs as well as on the idle ones when they go back on the market. It also helps that the rig aftermarket business is the highest margin business segment at the company.

For its other two business setments, though, the possibility of a pickup in 2016 looks a lot less likely. Prior to this downturn, there was a huge wave of new offshore rigs that were ordered, and many of them have come to market. So on top of the lack of interest in renting an offshore rig to explore for more oil, there is a large oversupply of rigs. Even when we start to see a pickup in demand offshore drilling, it will likely take some time afterwards before a demand for new rigs picks back up.

The one thing that National Oilwell Varco stll has going for it in this regard is that it still has a backlog of orders for its rig systems segment to work through. After the most recent announcement that it was writing down about $1.1 billion of its backlog because of rising concerns that the ultimate customer for those rigs, Petrobras, might not end up taking them. After adjusting for this writedown, the company has about $8.1 billion left in uncompleted orders. Hopefully that will be enough to keep it working until we see a pickup in the business.

Hey, at least we're not in financial trouble
Despite the declining prospects as of late for National Oilwell Varco's business segments, the one thing that investors can be happy with is the fact that the company has a rather strong financial position that should keep it from facing the ire of creditors. The company is still sitting on more than $1.8 billion in cash on the books, which is more than enough to cover 12 months of capital spending and dividends without any new cash coming in the door. Also, its debt to capital ratio of 16.3% also suggests that it still has some room to access the capital markets if it really needed to.

What a Fool Believes
It's pretty safe to say that 2016 won't be a blowout year for National Oilwell Varco, there are just too many headwinds in the oil and gas market and the lag that will likely occur between increased drilling activity and demand for new rigs means NOVs best days are probably beyond 2016.

At the same time, though, the company is a long ways off from suffering from any major financial issues during this time. So those that have the patience could consider the bargin bin pricing of National Oiwell Varco's stock as a way to build a position in a high quality company that will pay off a few years down the road.

Tyler Crowe owns shares of National Oilwell Varco.  You can follow him at Fool.com or on Twitter @TylerCroweFool.

The Motley Fool owns shares of and recommends National Oilwell Varco. Try any of our Foolish newsletter services free for 30 days. We Fools may not all hold the same opinions, but we all believe that considering a diverse range of insights makes us better investors. The Motley Fool has a disclosure policy.

Why Shares of Sandstorm Gold Are Falling Today