As bad as the business environment has been for National Oilwell Varco (NYSE:NOV) this year, the company had done a rather commendable job of not shooting itself in the foot with bad moves or bad press. That is, until just recently when it had to disclose that it was writing down more than $1 billion of its backlog. Let's take a look at some of the headlines that sent shares of National Oilwell Varco down 47% this year and what this recent announcement might mean for the company over the long term. 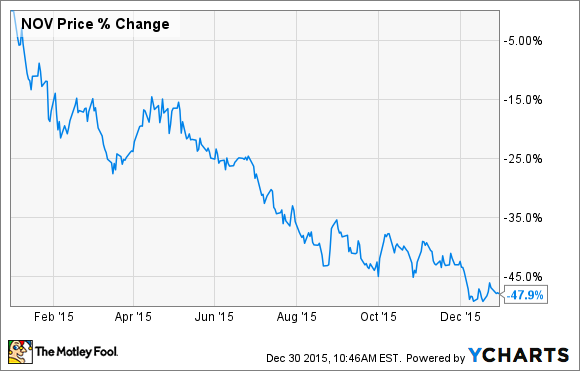 Declining earnings and oil prices sending shares down
The market has not been kind to National Oilwell Varco's shares. Since the company is a parts and equipment manufacturer for the oil and gas business, it doesn't have direct exposure to actual oil and gas prices. What is more important, though, is oil and gas drilling activity, and that is what has caused the company's revenues to dry up. One quick gauge of its recent results can be summed up by looking at the rig count in the United States. 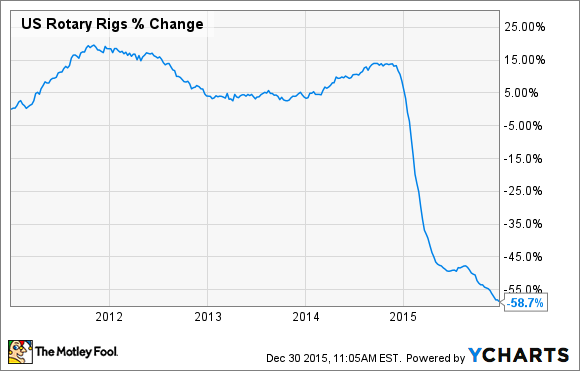 With fewer rigs in the field, producers and drilling contractors are chewing up equipment. So there are a lot fewer aftermarket parts needed from National Oilwell Varco. What has made this effect even worse for National Oilwell Varco has been the cannibalization of other equipment. Low demand for rigs has drastically reduced fleet utilization rates for rig providers such as Helmerich & Payne (NYSE:HP).

To help cut costs and try to maintain some level of profitability, drilling contractors have been stripping parts from their large supply of idled equipment rather than buying new from National Oilwell Varco. Moves like these, as well as the drying up of orders for new onshore and offshore rigs, have led to a 23% decline in revenue in 2015's year-to-date results compared to 2014's numbers.

With the added media attention on how oil prices may take a while to recover, there isn't a whole lot of reason to think that business is going to get better for National Oilwell Varco anytime soon.

This is not the way you want to eat into backlog
One thing National Oilwell Varco's investors have leaned on this year is that it had a very large backlog of work that could keep the company working and profitable throughout the year. Going into 2015, there was $14.3 billion in revenue backlog it could work through. At the end of the third quarter, that backlog had whittled down to $9.2 billion, but that was all from drawing down completed works.

On Dec. 29, though, the company announced that it was taking seven offshore drilling packages out of its backlog as a result of contract negotiations with Estaleiro Atlantico Sul S.A. and EAS International, two Brazilian shipbuilders. These orders were pulled as a result of the ongoing issues not just with oil prices but the murky political trouble surrounding the buyer of those offshore rigs, Petrobras (NYSE:PBR). The drilling packages removed from backlog were worth $1.1 billion.

Some might call this a bit of a relief since more than $3 billion in rig orders are contracted out to Petrobras and that a little over a third are being written down. However, it's probably worth watching how Petrobras' prospects and the political turmoil play out. It's not entirely out of the question that more of these backlog terminations could happen.

What a Fool believes
Oil and gas is a cyclical business, and this isn't lost on National Oilwell Varco's management. As a company with roots in the industry more than 100 years now, they have seen their fair share of market downturns and likely won't overreact to the current one. Some of the things that have affected the business, like the cannibalization of rigs, are one-time things that will temporarily impact earnings, so investors shouldn't fret too much about that. Also, the backlog revision is also shorter term in nature and likely won't impact things much in the future now that it has happened.

Going forward, investors should keep an eye on whether this is the only backlog writedown related to Petrobras' woes and if the company starts to see any hints of an uptick in its rig aftermarket segment. This segment will be the one that responds quickest to any change in drilling activity.