Alliance Resources Partners L.P. may be outperforming its peers, but for some reason, its stock sure hasn't.

Based on the way shares of Alliance Resource Partners (ARLP -1.88%) have performed over the past year or so, you might assume that its prospects are only marginally better than that of peers Peabody Energy (BTU) or CONSOL Energy (CNX 0.33%). What is strange, though, is that Alliance's results over the past several quarters don't seem to be showing the same kind of issues that CONSOL and Peabody face. 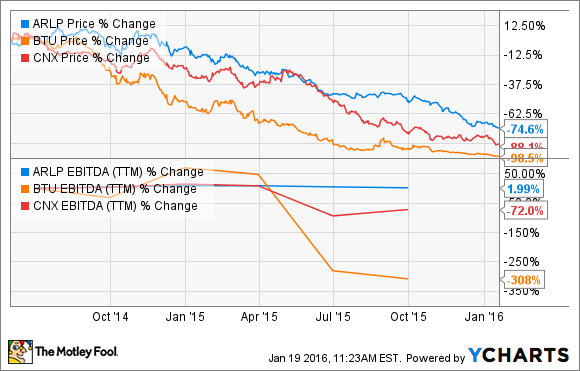 There's no doubt that the coal market is extremely weak right now. But despite a couple of minor cracks in the armour recently, Alliance has been able to churn out strong results. Can it deliver any news that might differentiate it from its peers? Let's take a look at what this quarter could have in store when it reports earnings on Jan. 26.

The roughest of the rough patch
It's kind of hard to contemplate the decline in coal. For about five years, the entire industry has been in decline as cheap natural gas has finally given coal a clear competitor in power generation. To make matters even worse, now wind and solar costs are dropping enough that utilities have very little incentive to build new coal facilities.

What has compounded this decline in demand has been that so few producers had the foresight to trim capital spending and slow mining from higher-cost mines. It would seem that every company could justify somehow that their coal was cheapest and they could keep spending. This clearly wasn't the case, and the half-decade slide has already put two of the nation's largest coal producers -- Alpha Natural Resources and Arch Coal -- into bankruptcy protection and Peabody Energy is looking like it could be headed that way as well.

Alliance has been just as guilty of oversupplying the market as the others as it has expanded production, but it was pretty clear that it was the lowest-cost producer. Its margins were a dead giveaway: 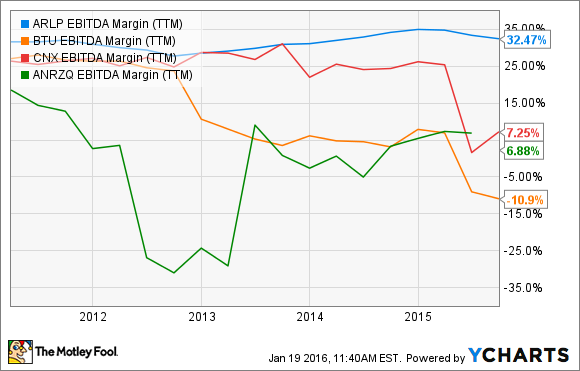 These companies going into bankruptcy pose a short-term problem for Alliance. They will continue to produce at their current facilities to help pay off their debts. This means that there is a good chance that production from existing mines will continue as is for a while.

Alliance seems to be aware of this problem, so management has decided to not give any production guidance until there is some more clarity about how this shakes out. It has also taken the cautious step of halting any distribution increases.

Without an increase in production expected and a continued decline in coal prices, chances are this quarter will not look as good as previous ones. What should give investors some confidence, though, is that management has been very conservative about its distribution and shouldn't have any issues with its payout for a while.

Time to diversify?
Being a one-trick pony in the energy sector is proving to be a very bad business model, especially if that one trick comes from coal. CONSOL Energy was one of the companies in the space to diversify from strictly coal by investing in natural gas, and it has helped to keep it in better financial standing than the other big coal miners.

So far, Alliance has done a very commendable job of keeping its debt well within its ability to generate operational profit, but that one commodity model does put it at risk. Management has thus started to invest in natural gas. Last quarter, it announced that it was bumping its investments in natural gas to $150 million. They may be rather small compared to the amount it generates from coal, but it's encouraging to see the company take the initial steps toward a more diversified business model that may be needed if coal continues to struggle as much as it has.

We might see management bump that investment level if the capital needs for coal decline, but don't bet on a huge bump this quarter. Rather, this is a trend that investors should monitor over time.

What a Fool believes
It would not be surprising to see Alliance post less-than-great results when it reports, but it should still be able to churn out decent profits on best-in-industry margins. It may not help shares buck the trends of the industry in general, but eventually the market will catch on that shares of Alliance are very cheap compared to its performance.

The Motley Fool recommends Alliance Resource Partners. We Fools may not all hold the same opinions, but we all believe that considering a diverse range of insights makes us better investors. The Motley Fool has a disclosure policy.