Alliance has scaled back its cal production ever so slightly, but its earnings show that the move is not a sign of weakness in the coal industry.

Over the past couple years, Alliance Resource Partners's (ARLP 2.74%) stock has flown in the face of the structural decline in the coal industry with increasing profits over the past five years. This quarter, though, the company started to show that not even it is completely immune to the struggle of other coal companies.

By the Numbers
Alliance Resource Partners is set up as a master limited partnership, so looking at earnings per share or net income results seem a bit silly. So instead let's look at the company's EBITDA. Two metrics that are arguably a better gauge of how a master limited partnership performs. EBITDA for the third quarter came in at $185 million, a slight decline from last years figure of $197 million and slightly below consensus analyst estimates compiled by S&P Capital IQ of $200 million. Here's how the company's operations breaks down by the two coal basins it operates: 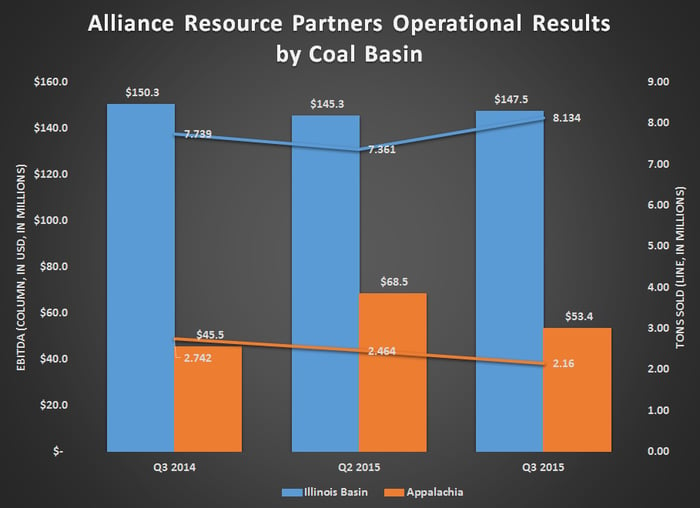 One noticeable trend in Alliance's results as of late has been the decline in Appalachian coal production. According to the company, this is by design. Several other operators in the Appalachian region are overproducing to cover expenses, which brings down profitability. So the company has scaled back production at some of its less profitable mines in the region until prices improve.

The highlights
What is astounding is that Alliance is actually increasing production and sales compared to this time last year. Considering that overall coal consumption in the U.S. has been on the decline for close to five years now, it suggests that Alliance is capturing greater market share.

Another component that cannot be ignored is the fact that Alliance has remained profitable through these trying times in coal. Alliance's EBITDA margin has remained above 30% in the quarter while its largest competitors, Peabody Energy (BTU) and Consol Energy (CNX 1.28%) can't even generate a positive EBITDA figure as of late. 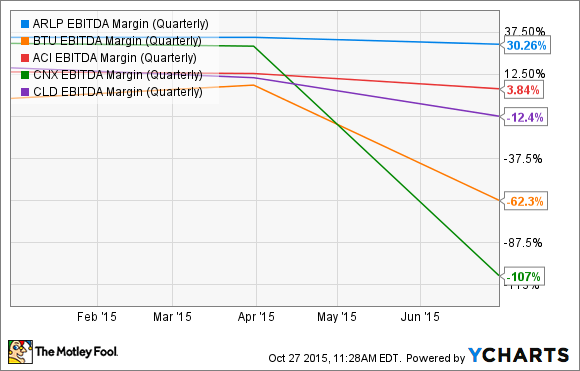 If the company can continue to increase profitable production, it will likely continue to impact the margins of peers such as Peabody and Consol and could force them into cutting back their production.

The lowlights
The one aspect of Alliance's results that were slightly less encouraging is that distributable cash flow for the quarter declined sequentially to $139 million and the distribution coverage ratio declined from 1.73 times to 1.58 times. To be fair, that is still a very healthy coverage and suggests that the company is not in any fear of a distribution cut any time soon.

However, management and the board, in conjunction with its general partner Alliance Holdings GP (NASDAQ: AHGP), believe that the distribution for the quarter will remain flat sequentially, ending a streak of 29 straight quarters with a distribution increase. In all likelihood, the move was made to keep a little extra cash within the company for other investments or possibly a sign that management anticipates the coal market to weaken even further in the coming quarters.

What a Fool Believes
Alliance's earnings showed the ever so slight sign that the weak coal market is finally making an impression. The desperate attempts by its competitors to produce despite an oversupplied market suggests that coal prices could be weak even longer until some companies either slow production or potentially go under. Based on the company's finances and the levels of profitability it has achieved as of late, Alliance will not be one of the ones to break under this market.