It's been a rough couple of months to be a shareholder of Skyworks Solutions (NASDAQ:SWKS). Despite posting a string of quarterly reports that exceeded the company's own guidance, fears of a slowdown in the smartphone market, mixed with the general foul mood in the markets, have hit the company's stock hard. Shares have lost 35% of their value over the past six months. 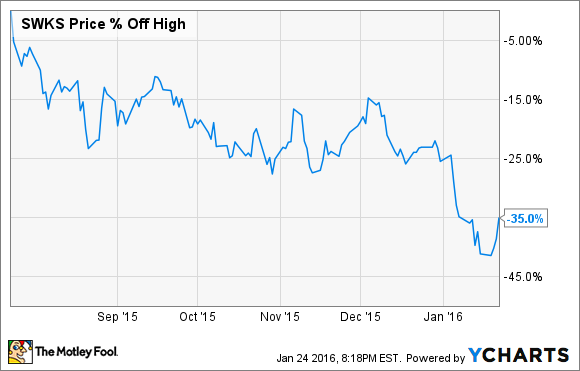 You can bet that Skyworks' management team hasn't been pleased with its share price decline and will do everything in its power to get its stock back in investors' good graces. The company will get its chance to do just that later this week, as it's reporting fiscal 2016 first-quarter earnings after the market closes on Thursday.

Here are four things I think investors should pay attention to when results are released.

The headline numbers
With Wall Street concerned that the all-important smartphone market has slowed down, you can bet the market will be paying attention to how the company's revenue and profits have held up over the past few months. On its last earnings call, Skyworks' management team was feeling quite bullish about the company's near-term prospects, expecting that the company's torrid growth rate will continue into this quarter. Management guided for revenue to fall between $925 million and $930 million, which, if achieved, represents double-digit growth from the $805 million it produced in the year-ago period.

The company believes its growth will be even better on the bottom line, as it predicted its non-GAAP diluted earnings per share to come in at $1.60. That bullish call represents nearly 27% growth over the $1.26 it put up in the same quarter last year.

Wall Street is skeptical that the company will be able to hit these targets, as the consensus estimate right now calls for only $916 million in revenue and $1.58 in earnings per share. Given Skyworks' strong history of meeting or exceeding expectations, the pressure is on to see if it can do it again.

Margins, margins, margins
One problem that plagues most semiconductor manufacturers is that over time, their margins nosedive. The combination of intense industry competition and customers' huge bargaining power relentlessly puts pressure on these companies to lower their prices, and as they do, their profitably suffers.

Skyworks has done an amazing job of bucking this trend over the past few years, as the company's gross, operating, and net margins have all been on the rise. 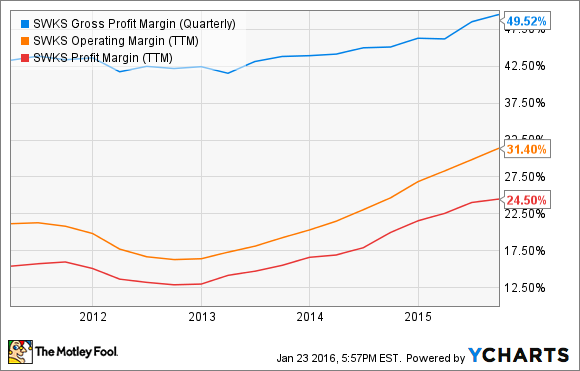 Skyworks has achieved this feat by running circles around its competition so far, but with Qualcomm (NASDAQ:QCOM) looking to expand its presence into Skyworks' stronghold markets, the company could find itself competing hard against a well-financed giant. The fact that Qulacomm's business has been struggling to grow for a few years now doesn't help, either, as Qualcomm's management team might start to really push hard into Skyworks' turf to help reinvigorate its growth. Add in the fact that the company has customer concentration concerns -- Foxconn made up 44% of its revenue last year -- and investors should have their eyes glued to the margin lines to see that the company is successfully dealing with both potential threats.

For what it's worth, Skyworks' management team isn't concerned about its margin lines one bit, as it has forecasted that non-GAAP gross margin will increase to 51%, up from the 50% it reported last quarter.

Taking care of shareholders
Skyworks' management team has proved itself to be very shareholder friendly in the past, as it has a history of buying back huge chunks of its shares on the open market when the stock price has waned. The odds look good that the trend will continue into the coming quarter, given that its board of directors recently authorized a new $400 million share-repurchase program, probably in reaction to the falling share price. With shares now trading hands for around 16 times trailing earnings, it looks like it could be a great time for the company to get aggressive with repurchasing shares. Since the company's balance sheet is packed with more than $1 billion in cash, I see no reason for it to be gun-shy.

Design wins in new markets
Skyworks' stock has historically been a great way to play growth in the smartphone market, but it's moving as fast as it can be to a player in the Internet of Things trend. Last quarter, the company called out new design wins in a number of different product categories, such as smart lighting, the connected home, and infotainment centers in upcoming automobiles. Was the company successful at landing some new design wins that will help it accelerate its growth in non-mobile-phone markets?

If Skyworks delivers good news in each of these areas, then it wouldn't surprise me one bit to see its shares pop on Thursday. Can the company deliver? We'll have our answer in a few short days.