With preliminary fourth-quarter sales and earnings already released, the most important aspect of Celgene's (CELG) earnings release and associated conference call was a look forward at what's to come rather than a review of the numbers that investors have had for a couple of weeks now.

Growth in Revlimid, which management expects to increase about 15% year over year in 2016, will benefit from the continued expansion into newly diagnosed multiple myeloma patients. The company launched in 13 countries last year and expects to gain reimbursement and launch in six more this year with Japan being the biggest growth driver of the lagging countries. Capturing newly diagnosed patients has a double advantage because there are more patients and they tend to get longer treatments.

Celgene's other blood cancer drug, Pomalyst, fell just short of being a blockbuster in 2015 with sales of $983 million, but the fourth-quarter run rate of $294 million suggests that the company should have no problem breaking the billion-dollar mark this year, especially as the launch in Japan ramps up and patients worldwide stay on the drug longer.

Growth in sales of Celgene's solid tumor drug, Abraxane, should come from pancreatic cancer and from lung cancer in the EU, although the latter is working off a small base. U.S. growth has stalled -- up just 4.7% year over year in the fourth quarter -- as Abraxane has taken as much market share as it can, but future growth could come from expansion into more patients for the cancers it's already approved for -- breast, lung, and pancreatic -- as well as combination treatments with immuno-oncology therapies.

Sales of Celgene's anti-inflammatory, Otezla, are coming along nicely as the oral medication takes away market share from the injected biologics. Sales for plaque psoriasis have surpassed Amgen's (AMGN 0.02%) Enbrel on a volume basis. 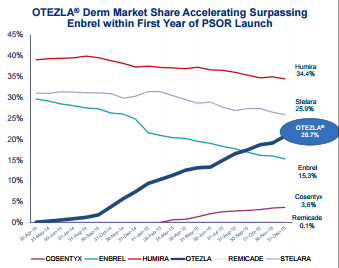 Admittedly, Amgen was already seeing declining market share before Otezla launched, but Celgene seems to have enhanced the decline. From looking at that chart, it certainly seems possible that Otezla could become the top-selling drug for plaque psoriasis in the coming years.

New drugs
Celgene has done a great job of expanding the use of its existing drug, but sales of new drugs will be the lifeblood of the biotech, especially as top-selling Celgene begins to see generic competition in 2022.

The good news is Celgene has 18 (eighteen!) phase 3 clinical trials that will read out between mid-2016 and mid-2018. Unfortunately, investors are going to have to wait to see if Celgene has its next Pomalyst or Otezla on its hand. All four phase 3 readouts in 2016 are designed to expand the markets of already-approved drugs -- two for Revlimid and one each for Abaxane and Otezla.

In 2017, we'll get data from two trials for ozanimod in multiple sclerosis. Celgene gained rights to ozanimod through its acquisition of Receptos last year. If the clinical trials are successful, it's not hard to see ozanimod becoming Celgene's next blockbuster after Otezla.

Brian Orelli has no position in any stocks mentioned. The Motley Fool owns shares of and recommends Celgene. Try any of our Foolish newsletter services free for 30 days. We Fools may not all hold the same opinions, but we all believe that considering a diverse range of insights makes us better investors. The Motley Fool has a disclosure policy.