With preliminary earnings numbers released, here's what investors should focus on during the earnings call.

Celgene (CELG) is scheduled to release earnings before the bell on Thursday. Investors already know how the quarter went, though, because the biotech let the cat out of the bag earlier this month, releasing preliminary fourth-quarter numbers at the J.P. Morgan Healthcare Conference as it usually does.

What we know
The preliminary tally for product sales in 2015 puts year-over-year growth at about 21%, driven largely by Celgene's blood cancer drug Pomalyst that grew 45% year over year, rocketing it into second place on Celgene's top-sellers list. Anti-inflammatory Otezla also helped boost the revenue line since 2015 was its first full year on the market, registering $472 million in sales compared to just $70 million in 2014.

Decade-old Revlimid only grew 16% year over year in 2015, but since it still makes up more than half of sales, the growth in sales of Revlimid have a big effect on Celgene's overall sales. For example, if Revlimid sales had been flat year over year, Celgene's product sales would have only been up 10%, compared to the aforementioned 21% increase Celgene actually managed.

Fortunately, Celgene sees a similar increase in growth for Revlimid in 2016, with sales expected to grow about 15% year over year. Combine that with the faster growers and Celgene is looking for total sales in the $10.5 billion to $11.0 billion range, which would be a 17% increase year over year, based on the midpoint of the range.

Celgene is looking to improve its adjusted operating margins in 2016 by 150 basis points, which will help earnings grow faster than revenue. For 2016, Celgene expects adjusted earnings per share in the $5.50 to $5.70 per share range, an increase of approximately 19% at the midpoint.

Keep in mind that Celgene's management is notoriously conservative with its earnings guidance. This time last year, it guided for adjusted earnings of $4.60 to $4.75 per share and the preliminary numbers put 2015 earnings per share near the top of that range at $4.71, which includes a $0.14 dilution associated with the acquisition of Receptos that wasn't announced until July.

The big question
With all of the important numbers already released, the most important thing investors can listen for is what management plans to do with its cash, especially since biotech has been slaughtered over the first month of the year. Celgene is down 12% this year and the broader iShares Nasdaq Biotechnology ETF (IBB 0.97%) is down even more. 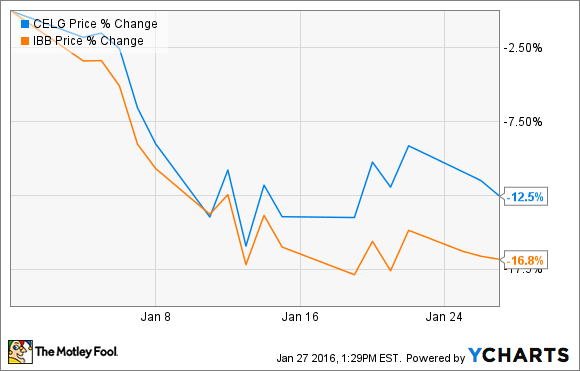 Is Celgene going to go shopping to pick up some drugs to boost its pipeline? Or does management think its stock is cheap so a big buyback is in order?

There's always the possibility that Celgene follows in Gilead Sciences' and Amgen's footsteps and offers a dividend, but that seems like a less likely scenario. Celgene has a lot of early-stage partnerships with small biotechs that have milestone payments due if the drugs that come out of the partnerships work. The company probably doesn't want to commit to a dividend since it'll need the cash if most of them come to a positive fruition.

Brian Orelli has no position in any stocks mentioned. The Motley Fool owns shares of and recommends Celgene and Gilead Sciences. Try any of our Foolish newsletter services free for 30 days. We Fools may not all hold the same opinions, but we all believe that considering a diverse range of insights makes us better investors. The Motley Fool has a disclosure policy.