The homebuilder's stock is getting hammered, only a day after announcing relatively upbeat earnings. It's not clear why the market has turned sharply.

What: Shares of Beazer Homes USA, Inc. (BZH 0.48%) are down 15.7% at 12:30 p.m. EST on Feb. 5. This major drop comes only a day after Beazer's stock was up, following the company's better-than-expected first quarter earnings release. Shares of other homebuilders are also down today, but not nearly as badly as Beazer's: 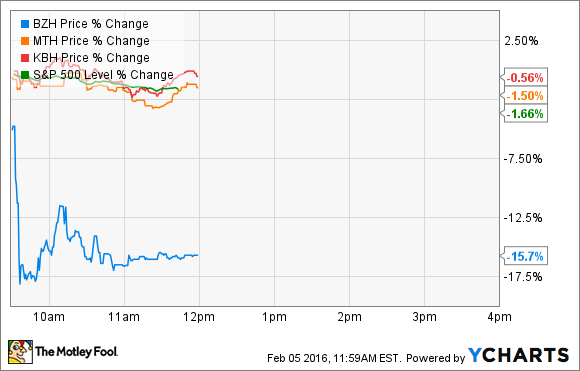 So what: It's unclear exactly what has Beazer so beaten-down, besides there likely being some short-term selling after yesterday's 7% gain post-earnings.

Beazer's earnings came in solid, with a $1 million profit well ahead of analyst projections, as well as 29% growth in revenue, and higher gross margin percent. Management also said that it would pay down at least $100 million in debt in 2016, further reducing its costs and positioning the company for better long-term flexibility.

Beazer Homes wasn't the only homebuilder to report good results recently. Meritage Homes (MTH 0.81%) and KB Home (KBH 0.34%) both reported financial results recently. Meritage Homes reported 11% revenue growth in the fourth quarter and 18% for the year, and  7% profit growth in the fourth quarter, while KB Home reported 26% sales growth, and a 20% increase in operating income for 2015.

Both are also forecasting for a relatively strong 2016, as demand for new homes remains good, and land price increases as well as tighter labor markets that have both squeezed profits over the past year are improving.

Now what: Beazer wouldn't be my first pick for a homebuilder investment, but it looks like the market is being relatively unkind to the company, as it has to almost all homebuilder stocks over the past year or so: 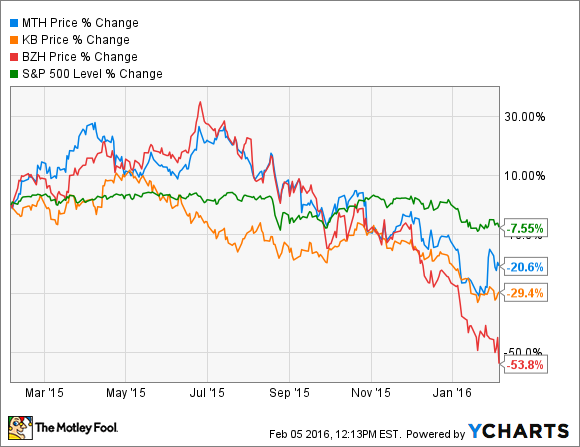 At the same time, the new-homes market seems to have solidified, and new-home construction levels are still probably too low to meet long-term demand. All of the uncertainty out there seems to be weighing on homebuilders, though, and that's likely to keep their stocks more volatile than the market.

But for patient investors willing to ride out the ups and downs, homebuilders are starting to look pretty attractive as a group.