Please ensure Javascript is enabled for purposes of website accessibility
Log In Help Join The Motley Fool
Free Article Join Over 1 Million Premium Members And Get More In-Depth Stock Guidance and Research
By John Bromels – Jun 9, 2020 at 7:23AM

Despite terrible housing data, the stock market is bullish on residential real estate.

After March's stock market crash, May's gains pushed two of the three companies back into positive territory for the year. KB's shares are up 1.5% so far in 2020, while Meritage's have now gained 20.5%. Only Beazer is trailing the market's year-to-date performance, with shares down 26.4% compared to the S&P 500's 3.7% loss. 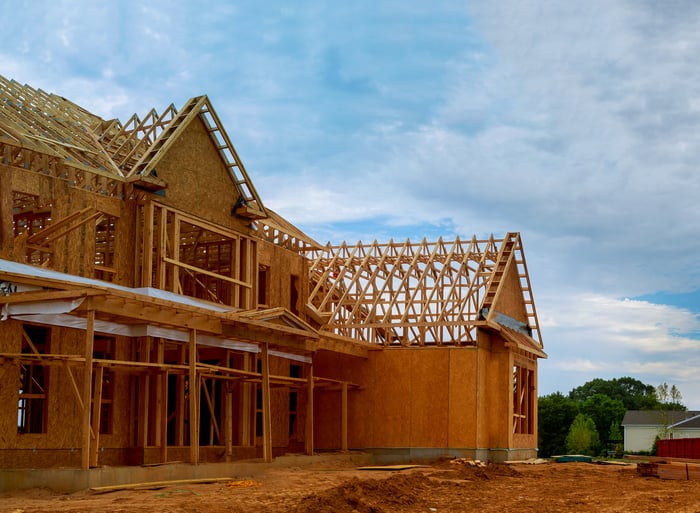 It's rare that an industry outperforms in the face of disappointing market data, but that's exactly what happened for these residential real estate companies in May.

Most of the data released in May was from March. Naturally, it showed a massive slowdown in all aspects of the residential housing market due to the double whammy of an economic downturn and stay-at-home orders covering much of the country. Data from the National Association of Realtors (NAR) showed existing-home sales tumbled 20.8% from February to March, while housing starts dropped by 22.3%.

The reasons for the downturn are obvious. Despite mortgage rates falling to all-time lows, many sellers yanked their homes from the market, not wanting to allow strangers to tour them during a pandemic. Buyers were forced to stay home, which meant they weren't touring model homes or meeting with real estate agents or mortgage brokers.

By mid-May, though, industry insiders were already aware that March's numbers were going to be dreadful. So they brushed off the doom and gloom from two months prior and instead looked at the recent data for clues as to where the market was headed.

Sure enough, there were some promising indications that housing was actually starting to experience a bit of a recovery. Mortgage applications for purchases (as opposed to refinances) -- which don't necessarily translate into sales, but indicate future sales activity -- fell for five straight weeks during late March and much of April, despite the Federal Reserve cutting the prime rate to near zero. This drop in turn brought the prime 30-year fixed mortgage rate down to a record low. However, applications started to pick up again in late April, and have now been on the rise for seven consecutive weeks.

The data also seems to indicate that, despite sluggish activity during the downturn, demand for homes is still high. The NAR reported that existing home prices in April were up by 7%. An environment with strong demand and rising existing-home prices is fantastic for homebuilders, as it means they can offer brand-new homes at more competitive prices.

The housing market should continue to strengthen this summer as coronavirus-related restrictions are eased and buyers begin to feel more comfortable leaving their homes to meet with realtors and visit open houses and model homes. Construction activity should resume in states where it slowed or halted.

The NAR also noted that after the pandemic, 5% of realtors are seeing buyers more interested in moving to the suburbs to be farther apart from their neighbors. Interest in homes with home office space or an extra bedroom has also increased, which is likely to benefit homebuilders, since many existing homes don't include such amenities.

One big question, though, is whether the situation will last. With the unemployment rate still in double digits, many workers -- especially younger ones -- may no longer be able to afford that first home. Once the pent-up demand from the lost spring selling season eases, the numbers may look very different.

Still, the coronavirus doesn't seem to have put as big a dent in the housing market as it could have -- at least for now. Investors who are bullish on a speedy economic recovery may want to consider buying homebuilding stocks like KB Home, Meritage Homes, and Beazer Homes USA.