Please ensure Javascript is enabled for purposes of website accessibility
Log In Help Join The Motley Fool
Free Article Join Over 1 Million Premium Members And Get More In-Depth Stock Guidance and Research
By Brian Feroldi - Mar 27, 2016 at 8:10AM

American Express' dividend yield is near a five-year high, but income-focused investors might want to look at these three dividend stocks instead.

The past year hasn't been very kind to shareholders of American Express (AXP 2.29%). Shares are down more than 34% from 2015 highs, mostly from the news that its longtime partner Costco Wholesale had decided to end its affiliation with the company. That fact has greatly hindered American Express' near-term growth prospects, causing many investors to lose interest in the stock.

However, a flip-side to a falling share price is that it has the affect of raising a company's dividend yield. In fact, American Express currently yields 1.85%, which is quite close to its five-year high. 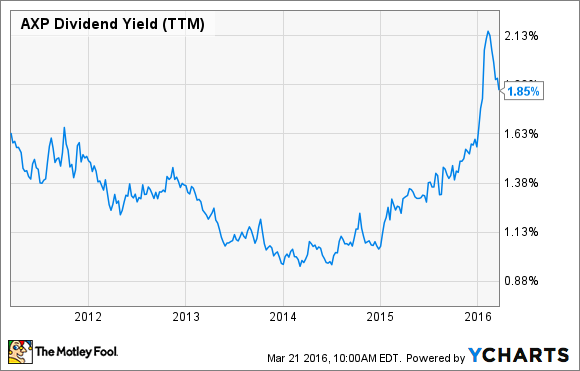 While that might grab the attention of some income-focused investors, I think there are plenty of other companies dividend lovers should buy before they consider American Express. Below is a list of three dividend-paying companies that I think are better choices.

1. Wells Fargo (WFC 1.72%)
Investors who want to stick in the financial sector might want to consider buying shares of Wells Fargo, a perennial Warren Buffett favorite. Buffett likes Wells Fargo so much that he has turned it into Berkshire Hathaway's largest publicly traded holding, and for good reason. With more than 8,700 stores and 70 million customers nationwide, Wells Fargo is a banking giant with a vast reach. The company is also an expert as using its size and scale to continually attract new customers, and since Wells offers a huge range of financial products, the company is able to meet all of its customers' financial needs.

What sets Wells Fargo apart from its industry peers is its superb management team and low cost structure. The company sports an efficiency ratio of 57%, which is one of the lowest among its peer group. By keeping its operations lean, the company can price its products competitively and still generate strong cash flows.

Wells Fargo has a history of paying a solid dividend, and its shares currently yield just shy of 3%. The company's stock isn't all that expensive, either; shares are currently trading for less than 13 times trailing earnings and for about 1.5 times book value. Thats a fair price to pay for this strong business, which is why I think its a great choice for dividend investors.

2. Spectra Energy (SE)
With the energy markets still in turmoil, a huge number of energy companies have seen their stock prices crash, causing dividend yields to skyrocket. That could make right now a good time to go picking through the rubble to buy shares of the most stable companies in the sector.

One energy stock I like a lot in the space is Spectra Energy, as the company has very little exposure to the price of oil or natural gas. Spectra Energy primarily makes its money by transporting natural gas, and 99% of the company's EBITDA is derived from fee-based activities. That gives the company's financial statements huge stability, which allows it to continually grow its dividend yield even in the face of declining commodity prices. Just a few months ago, Spectra Energy raised its annual dividend payment by 9%, which is a testament to just how strong this company's financial position is. How many other energy companies can make that claim?

Shares currently yield more than 5% and its management team has stated that the dividend will grow by $0.14 per share annually between now and 2018. That makes Spectra Energy a stock that offers high yield and predictable growth, which is a great one-two punch any income-focused investor should appreciate.

3. American Tower (AMT 0.25%)
Investors willing to sacrifice a little bit of yield now in exchange for the prospects of fast growth should considering owning American Tower. The company is a real estate investment trust, or REIT, that makes money by buying or building cell towers around the world, and then leasing space on those towers to a variety of wireless providers.

This model has worked out wonderfully for investors since it costs the company very little to add an additional carrier to a tower, allowing the company's profitability to jump hugely with each additional sign-up. As the worldwide demand for wireless data has exploded, American Tower has had no problem leasing out space on its towers. In fact, the company has grown its top and bottom lines by double-digit rates in each of the past six years, allowing it to hike its dividend payment by more than 20% annually since it made its first payment in 2012. With the demand for mobile data still in growth mode around the world, it's likely the company will continue to show strong growth in the years ahead.

Management believes 2016 will be another good one for the company, as the combination of organic growth and acquisitions are projected to drive total revenue growth of 22% and 18% growth in AFFO (a REIT proxy for earnings). Those kind of growth rates should easily allow the company to continue to grow its payout quickly.

American Tower's yield is currently slightly over 2%, which is lower than both Wells Fargo and Spectra Energy, but I think the prospects of fast growth more than compensates investors for the small upfront yield.

3 Investment Bank Stocks With Valuations Too Cheap to Ignore

This Warren Buffett Stock May Protect You From High Inflation