Please ensure Javascript is enabled for purposes of website accessibility
Log In Help Join The Motley Fool
Free Article Join Over 1 Million Premium Members And Get More In-Depth Stock Guidance and Research
By Eric Volkman - Jan 12, 2016 at 7:42AM

Our first three raisers for 2016 are an energy infrastructure company, a regional bank, and a sports apparel retailer.

Welcome to 2016, and the first installment of our series for this year. 2015 will be a hard act to follow, packed as it was with dividend raises from all types of companies, from high-powered blue chips to low-visibility stocks in remote corners of the market.

The beginning of any year is a rather fallow period for distribution hikes generally, as it falls between earnings seasons. So there weren't many raisers last week. Among the few were these three companies getting a head start on the new year by bumping their payouts:

Spectra Energy
This natural gas pipeline specialist has lifted its quarterly dividend by 9%, to nearly $0.41 per share. Because of its core business as an operator of gas infrastructure rather than a producer Spectra Energy (SE) is, to a high degree, insulated from the vagaries of the broader energy sector. 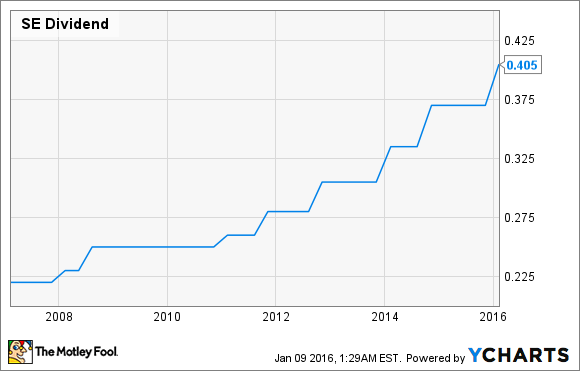 And that's a good thing, given the continuing slide in crude prices. Spectra Energy makes its money by charging fees to use its pipeline network, so it's nicely insulated from those pricing headwinds. Although both revenue and bottom line were down on a year-over-year basis -- by 9% to $1.1 billion and by 4% to $243 million, respectively -- in the company's most recently reported quarter, it remains well in the black with admirable profit margins.

It also produces plenty of the nice green stuff. Net operating cash flow has been on the rise, jumping by 17% in fiscal 2014 to almost $2.5 billion. That figure was the highest of the past five fiscal years. It'll also help the company reach its goal of increasing the dividend by $0.14 per share between now and 2017, an ambition that should be catnip for income investors.

Spectra Energy's new dividend will be paid on March 8 to shareholders of record as of Feb. 12.

Bank of the Ozarks
In a move nearly as expected as death and taxes, serial dividend raiser Bank of the Ozarks (OZK 0.29%) has again lifted its quarterly distribution. This latest bump is a 3% increase to $0.15 per share.

The bank is a regional operator headquartered in Little Rock, Arkansas, and has been plying its trade quite effectively for decades. It's humming along quite nicely, thank you very much, with a plump 44% year-over-year rise in net profit in its most recently reported quarter, to just over $46 million. This was on the back of an increase in assets by nearly that percentage, to $9.3 billion and a nearly 50% increase in deposits to $7.6 billion. 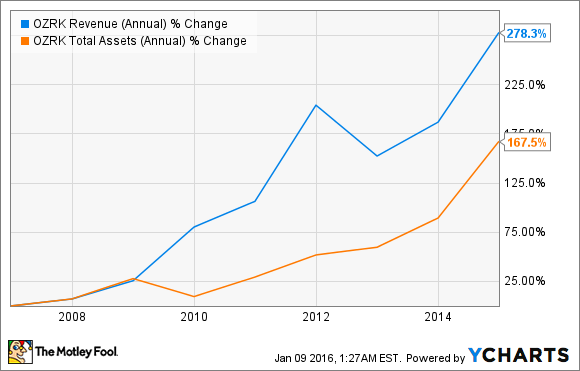 What helps is that Bank of the Ozarks doesn't make too many missteps in its lending. Its ratio of non-performing loans/leases to total borrowing was a skimpy 0.3%, down from just under 0.5% in the same period last year.

One negative for income investors, though, is that the company isn't all that generous with its payout. Even at the newly enhanced rate, it only yields 1.3% -- well below the current 2.2% average of stocks on the S&P 500 index.

For those who don't mind, Bank of the Ozarks' newly raised dividend is to be paid on Jan. 22 to stockholders of record as of Jan. 15.

Finish Line
Quick, when would be the worst time for a company to raise its dividend? Just after reporting a deep net loss? In the wake of announced store closures? After admitting that the CEO is to be replaced?

Well, sports apparel retailer Finish Line (FINL) bumped its quarterly payout in the wake of all three events. The new dividend is $0.10, 10% higher than its predecessor.

That was basically the only good news for the company last week. The Q3 2016 figures saw it plunge well into the red, with a net loss of almost $22 million. Finish Line put the blame on the implementation of a new warehouse and order management system that didn't go as planned, negatively affecting both in-store and online sales. 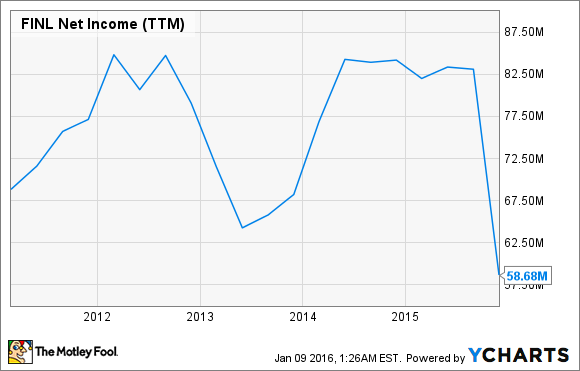 Meanwhile, the company said it will close as many of 150 of its outlets, a figure that is roughly 25% of the total. It will also seat a new CEO, current company president Sam Sato, who is replacing current chief Glenn Lyon from the end of next month.

Almost needless to say, these latest developments raise a lot of concern about Finish Line's viability going forward. Apparently, those kinks in the new system are being ironed out, but the scary loss and the many store closures likely make the dividend tenuous. This is a company in need of repair.

Finish Line's upcoming payout is to be dispensed on March 14 to stockholders of record as of Feb. 26.

Eric Volkman has no position in any stocks mentioned. The Motley Fool owns shares of and recommends Spectra Energy. Try any of our Foolish newsletter services free for 30 days. We Fools may not all hold the same opinions, but we all believe that considering a diverse range of insights makes us better investors. The Motley Fool has a disclosure policy.