Image by PublicDomainPictures via Pixabay

What: Shares of TherapeuticsMD (TXMD -5.05%), a healthcare company primarily focused on developing products for women, were up more than 10% as of 2:35 p.m. EST Monday on two pieces of news that appear to have captured investor's attention.

So what: First, the company presented additional details from its Phase 3 Rejoice trial related to its lead compound TX-004HR over the weekend. TherapeuticsMD displayed two posters at the Endocrine Society's annual meeting in Boston that showed that patients who used TX-004HR in the trial demonstrated a statistically significant improvement in dyspareunia -- which is vaginal pain during sexual intercourse caused by vulvar and vaginal atrophy (VVA) -- and vaginal dryness when compared to patients who only used a placebo. In addition, the company also stated that the FDA gave them conditional approval to use the brand name Yuvvexy for the drug.

Secondly, the company is getting some love from the analyst community on Monday as an analyst at Goldman Sachs initiated coverage of TherapeuticsMD stock today and rated the shares a buy. The analyst based his bullishness on the data from the Rejoice trial and gave shares a $10 price target, which is quite a bit higher than the $7 and change that they are currently trading at.

The combination of positive events appears to have put traders in a good mood today, hence why shares are jumping.

Now what: Investors were likely relieved to see shares of TherapeuticsMD come back to life as they have been under pressure since the start of the year. Even after including Monday's jump they are still down nearly 30% since Jan. 1, 2016.

That shouldn't concern the company's bull too much as traders have been dumping biotech stocks in general for quite some time. For example, the iShares Nasdaq Biotechnology ETF (IBB 0.90%), a fund that holds a huge variety of stocks from the biotechnology sector, has also been a horrific performer year to date, so it's likely that TherapeuticsMD simply got caught up in the carnage. 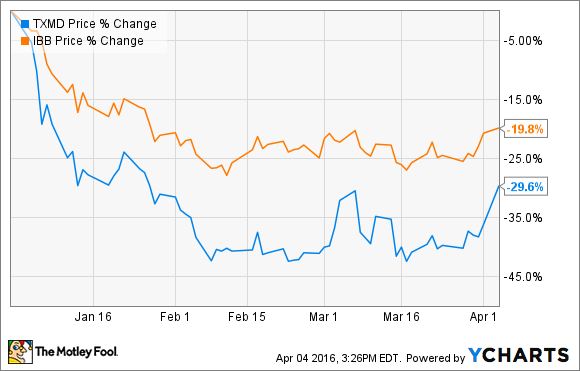 Given the results of the Rejoice trial I think there are reasons to for investors to be optimistic about TX-004HR chances of winning regulatory approval, especially since there wasn't any clinically significant differences in the number of adverse events reported between the two groups from the trial.

From here, the company is still planning on submitting TX-004HR for FDA approval in the first half of the year, and if all goes well then the market for TX-004HR could be huge. Millions of women in the U.S. experience symptoms of VVA and yet only a tiny fraction of them are treated with a prescription therapy. That has caused some analysts to believe that TX-004HR could reach blockbuster status if it wins approval.