Please ensure Javascript is enabled for purposes of website accessibility
Log In Help Join The Motley Fool
Free Article Join Over 1 Million Premium Members And Get More In-Depth Stock Guidance and Research
By Dave Kovaleski - Mar 5, 2020 at 10:45AM

The ETF is the largest in its space and offers biotech investors a less volatile avenue.

Exchange-traded funds, or ETFs, are one of the fastest-growing investment vehicles in the country. ETF assets have grown at an annualized rate of 25% over the past 10 years to over $4.3 trillion in total assets, according to Bank of America (BAC -1.71%) analysts. BofA projects that the asset total will surpass $5 trillion by the end of 2020. Over the next 10 years, BofA projects a 10-fold increase in assets to $50 trillion by the end of 2030.

That growth is "driven by a continued move to passive and increased awareness of the attractive tax efficiency, cost, liquidity and transparency characteristics of ETFs," wrote Bank of America analyst Mary Ann Bartels in December.

ETFs also provide investors with an opportunity to invest in a specific part of the market in a more diversified way. This is particularly relevant in more high-growth but riskier sectors, like biotech. If you're not intimately familiar with companies in this sector but are intrigued by their growth potential, an ETF like the iShares Nasdaq Biotechnology Fund (IBB 0.50%) might be an investment to consider. 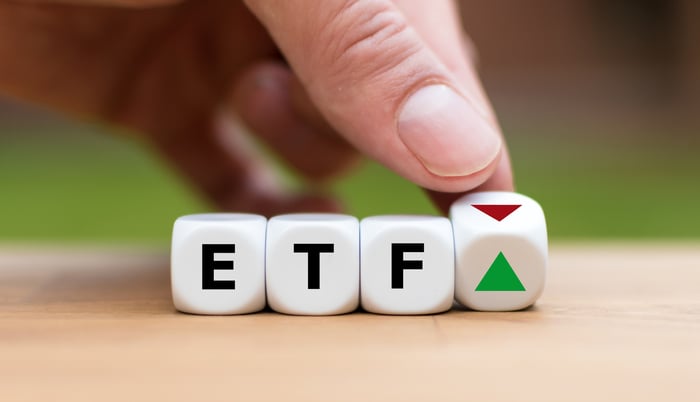 All biotech ETFs are not the same, as they mimic different indexes with different strategies. Some offer exposure to more stocks, while others less. Some are more concentrated in smaller growth stocks, while others hold larger, more stable companies. The largest biotech ETFs in terms of assets under management are the iShares Nasdaq Biotechnology at $7 billion, SPDR S&P Biotech (XBI 1.34%) at $3.9 billion, First Trust Amex Biotechnology Index (FBT 0.53%) at $1.7 billion, and Ark Genomic Revolution Multi-Sector (ARKG 0.49%) at $544 million.

The SPDR S&P Biotech ETF, for example, invests in only 89 companies and the holdings are equally weighted, meaning the underlying stocks have roughly the same percentage weighting. In contrast, the iShares Nasdaq Biotechnology ETF is market-cap weighted, meaning the holdings are weighted by market cap. The SPDR ETF returned 32.3% in 2019 and has an annualized return of 9.2% over five years and 18.5% over 10 years. It has an expense ratio of 0.35%.

The Ark Genomic Revolution Multi-Sector ETF has even fewer holdings, between 30 and 50. It focuses on stocks in the fast-growing genomics market, which relates to the science of the genome, and is expected to grow by 13.5% per year through 2024. In 2019, the Ark ETF returned 44%, beating the iShares offering. It has a five-year annualized return of 10.9%. Since its 2014 inception, it's up 11.8%. However, it has a higher expense ratio, 0.75%, than the iShares ETF.

The iShares Nasdaq Biotechnology Fund has lagged the competition over the last few years, so if you're looking for higher growth potential, you may want to consider some of its rivals.

While the biotech sector is expected to be strong in 2020, it's a volatile sector. For investors who favor more stable performance and less volatility, this iShares ETF is a solid choice.

The iShares ETF has an expense ratio that is not the lowest among its competitors but is near the lower end of the spectrum. Also, the broader diversification and cap-weighted portfolio won't have the ability to generate the type of growth that an equal-weighted portfolio will, or outperform one with fewer holdings that focuses on a particular sector, but it will offer more protection on the downside while delivering steady long-term returns.