Interest expense, net income, and EBIT are three related financial metrics that all have to do with the profitability of a company. Here's what you need to know about calculating each one, and how they can be used to analyze a company's profitability.

Interest expense refers to the costs of borrowing money, and includes a company's interest payable on any bonds, loans, convertible debt, and lines of credit. It does not include other fixed payments, such as dividends on common or preferred stock.

Interest expense is included on the company's income statement, and represents the interest accrued during a certain time period, not necessarily the interest the company actually paid.

The simplest way to calculate interest expense is to multiply a company's debt by the average interest rate on its debts.

Net Income
Also referred to as the "bottom line" because of its location on an income statement, net income is the company's total earnings or profits after all expenses, depreciation, interest, and taxes are subtracted from the revenue.

Net income can give investors a good idea of how profitable a company was during a certain time period. It's also used to calculate earnings per share (EPS), which can be useful for calculating valuation metrics such as the price-to-earnings (P/E) ratio.

EBIT
EBIT stands for "earnings before interest and taxes," and is a non-GAAP number, meaning that it isn't found on the income statement. However, EBIT, which is also known as operating profit, can be a useful metric.

As the name implies, EBIT refers to a company's earnings (net income) with interest expense and taxes added back in. In other words, it ignores the variable expenses of interest and taxes, and only includes expenses related to the company's core business operations.

EBIT can be calculated in two ways:

For example, in the simplified income statement below, taxes are not listed as an expense. Therefore, the easiest way to determine EBIT would be to take the company's net income of $177,000, and add the interest expense of $14,000, resulting in EBIT of $191,000. 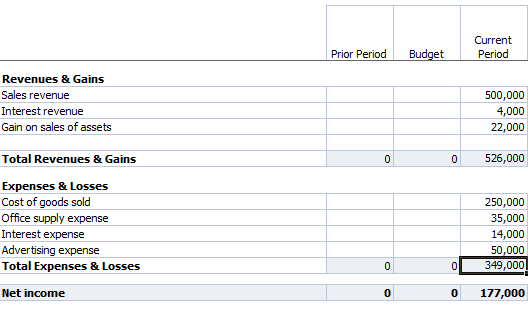 EBIT is useful for determining a company's ability to make money, and is a popular metric used when companies consider a buyout of another. EBIT can show a company's earnings potential, while ignoring taxes and capital structure, which could both look completely different after an acquisition.

You can often find information about a company on the website of your broker, so make sure you're working with the best one for your needs.