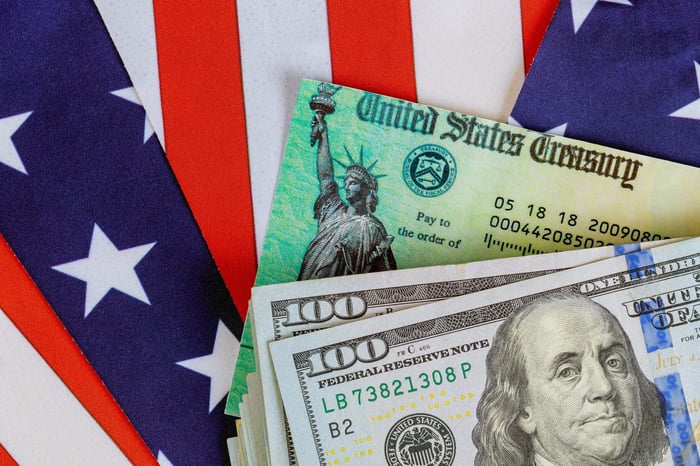 After months of fruitless negotiations, lawmakers appear to be closing in on a deal to provide more COVID-19 relief. The latest proposal, which has bipartisan support, would include stimulus checks of between $600 and $700 for most U.S. adults. It would also expand unemployment benefits, providing an additional $300 per week.

The plan could be voted on as early as Friday, when it could be attached to a broader spending bill necessary for continued government operations. And with lawmakers pledging they won't break for the holidays until a deal gets done, this is the closest Americans have come in months to seeing more stimulus money in their bank accounts.

But the passage of the next coronavirus relief bill isn't a sure thing yet -- and efforts from Congresswoman Alexandria Ocasio-Cortez to get more money for struggling individuals and families could potentially end up backfiring.

Alexandria Ocasio-Cortez, better known as AOC, has become a de facto leader of a group of progressives fighting for more help for Americans during the coronavirus crisis.

On Wednesday evening, she took to Twitter -- where she has more than 10 million followers -- and conducted a poll asking if $600 for a second COVID check was enough. She went on to explain this amount was the "current proposed COVID package amount" and urged her followers to contact their Congress members and let them know if "you don't want your member to vote for a $600 deal."

"If there's an amount that's too little, or any other red line that you want them to vote NO on, then you need to tell them that, AOC tweeted on Wednesday.

AOC's position is clear that the deal on the table is not sufficient to provide the help the public needs. Not only has she indicated the $600 payments are too small, but she also said on Twitter that she objects to the fact "Republicans are forcing Dems to choose between stimulus money OR unemployment benefits," referring to this choice as "barbaric."

See, stimulus payments were initially left out of the proposed COVID-19 relief bill in an effort to keep the price tag to a level that Senate Republicans indicated they were comfortable with. Many on the right want to keep the total cost of the next coronavirus relief bill under $1 trillion.

To stay within this price range but provide direct payments to Americans, the new proposal reduces the number of weeks the extra $300 in unemployment money is available. AOC believes the government could easily provide more money for the unemployed and higher stimulus checks -- and that Democrats shouldn't be forced to choose who to help.

And while some on the left, such as President-elect Joe Biden, have urged the swift passage of a stimulus bill -- even an imperfect one -- to get help to people now, AOC believes it's urgent to put as much money as possible into this current bill. In a podcast interview released Thursday, she expressed her doubts that there would be a third relief bill if Democrats don't win two long-shot Senate runoff elections in January.

Could this backfire and derail the bill?

While AOC is aiming to pressure her colleagues in Congress to provide more money in the next coronavirus bill, the unfortunate reality is that time is running out to provide relief before the end of the year -- even if lawmakers do work through the holiday season.

As many as 12 million Americans could lose unemployment benefits on Dec. 26. And even if Congress passes a bill, it may already be too late to avoid an interruption in their income. Worse, lawmakers have been fighting for months about how to help Americans, and this latest bill is the first one that has come close to gaining enough traction to pass.

If progressives revolt against the bill and convince enough Democrats not to vote for it, that could potentially doom its passage. And efforts to provide more stimulus money to Americans could push the price of the bill to a level Republicans will no longer support, which could also mean it ends up dead on arrival in the Republican-controlled Senate.

The balance, in other words, is very precarious. And there's a very real chance that a push for big changes to the bill -- however well-meaning -- could end up resulting in nothing getting done at all.