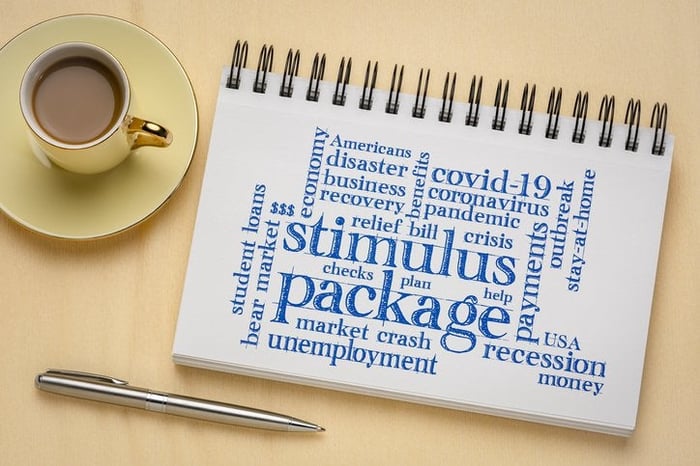 For months, lawmakers have been negotiating the terms of a new coronavirus relief bill that would be a follow-up to the Coronavirus Aid, Relief, and Economic Security Act (CARES Act). Unfortunately, compromise has proved elusive. In fact, it had started to seem as if the most likely outcome was no further stimulus, at least until after the inauguration of President-elect Joe Biden.

Earlier this week, however, a bipartisan group of lawmakers introduced a $908 billion proposal. The proposal includes enhanced federal unemployment benefits of $300 per week; $160 billion in financial aid to state and local governments; $288 billion to renew the Paycheck Protection Program and help small businesses; and $25 billion in rental assistance. It does not include a second stimulus check.

Biden has now endorsed this new framework, as have other Democratic leaders. This is a major break from the past. House Speaker Nancy Pelosi previously indicated her party wouldn't support a bill unless it provided much broader relief at a much higher price tag.

Still, even with the support of the president-elect, it's far from certain this stimulus bill will pass in the coming weeks.

The new bipartisan proposal was introduced with the support of five Democrats and four Republicans. It incorporates key policy priorities from both sides of the aisle. These include support for state and local governments that Democrats have argued is essential as well as liability protections for businesses that Republicans believe are necessary.

The framework earned the support of the president-elect. Speaking to a group of workers and business leaders as part of a small business roundtable, Biden called the bill a "down payment." While he made clear it "wouldn't be the answer," he threw his support behind it because it would offer immediate relief to those in need. "This isn't a political game," he said. "We need to get help out the door as soon as we can."

Pelosi and Senate Minority Leader Chuck Schumer have also indicated they might be on board. They wrote in a letter Wednesday, "In the spirit of compromise, we believe the bipartisan framework introduced by Senators yesterday should be used as the basis for immediate bipartisan, bicameral negotiations." Although the letter stressed there was room for improvement, it also stated, "The need to act is immediate and we believe that with good-faith negotiations we could come to an agreement."

Pelosi and Schumer's endorsement is something of a surprise as the $908 billion price tag is far below the cost of any relief bills they had previously entertained. The HEROES Act, which was passed by the Democrat-controlled House of Representatives, originally came in at more than $3 trillion dollars. Even a "scaled-back" version of the HEROES Act, proposed after months of negotiations, still offered $2.2 trillion in aid. Speaker Pelosi repeatedly stated this was the lowest acceptable offer as Democrats didn't want to provide piecemeal relief.

This shift may be a reflection of new political realities. Pre-election polls suggested the possibility of a "blue wave" that could give Democrats control of the White House and Congress. But this did not materialize. Republicans are now slight favorites to retain control of the Senate pending the outcome of two runoff elections in Georgia. That would give Senate Majority Leader Mitch McConnell continued veto power over legislation and make a larger relief bill a political impossibility.

Still, the endorsement by the president-elect and the support of other Democratic party leaders may not be enough to get the new bipartisan plan off the ground. McConnell has argued for a much smaller relief package, unveiling a $333 trillion proposal on Tuesday that will not get bipartisan support. Unless the Trump White House and others on the right embrace the new compromise framework, consensus will remain beyond reach.

If common ground can't be found, Americans will need to wait until after Inauguration Day before they'll have a chance of any more money in their bank accounts. And even then, more coronavirus relief is far from a certainty.