Retirement is certainly not the time to take on undue amounts of risk. Even so, there's a lot to be said about owning at least a few high-quality dividend stocks that can provide a stable source of passive income in your golden years. With this in mind, our Foolish contributors discuss the merits of three dividend-paying value stocks below that may make a great addition to a senior's portfolio right now.

Tim Green: There aren't too many technology stocks out there that can genuinely be considered safe. The unrelenting march of technological progress guarantees that companies and business models are constantly being disrupted, forcing even the most successful tech companies to continually reinvent themselves. One good option for those looking for a tech company that has a great chance of standing the test of time, though, is networking giant Cisco Systems (NASDAQ:CSCO).

Cisco provides the switches and routers that form the backbone of the Internet. The company is dominant in both areas, enjoying market shares that dwarf its nearest competitors. Cisco isn't sitting still -- the company is focusing heavily on growing its software and services businesses, diversifying away from hardware. Cisco aims to be an integrated provider of networking solutions, not simply a seller of boxes.

Despite the stock nearly doubling over the past five years, Cisco is still a great value. The company has generated $12.7 billion of free cash flow over the past 12 months, putting the market capitalization at just about 12 times that number. Cisco's balance sheet is also bulging with cash -- $34.9 billion net of debt. Add in a dividend yield of 3.35%, and the result is a value stock that all investors should have on their radars.

Other banks are more profitable now, but BofA is just too cheap to ignore

Jason Hall: Bank of America (NYSE:BAC) stock sells for less than two-thirds the bank's book value. Here's how it compares to some of its megabank peers: 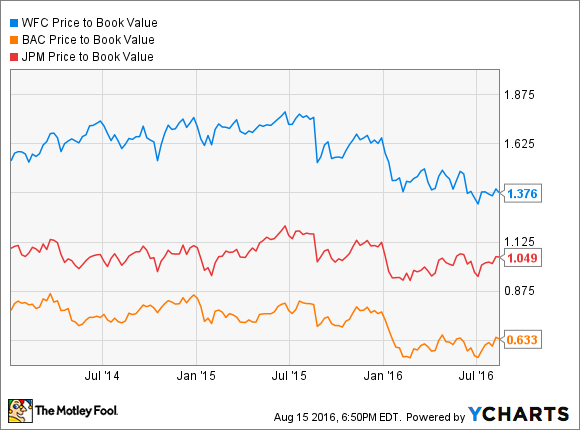 To some extent, Bank of America should be cheaper than its big-bank peers. Its returns on assets aren't up to the same levels, largely because its net interest margin -- that is, the spread between what it pays for money versus what it charges to lend that money out -- is far below that of other big banks, like Wells Fargo.

But Mister Market is pricing BofA's shares as though the company were sitting on some sort of financial dirty bomb -- a reasonable way to price BofA following the financial crisis, but a likely overestimation of the troubles the bank faces today. Yes, Bank of America shares should trade for a lower premium than its more profitable peers. But such a steep discount to its book value paints a picture of higher risk than is likely the case.

While not a stock to just buy and forget, the risk-reward opportunity is probably just too good to ignore, even for a retiree.

This pharma stock has it all

George Budwell: If you're looking for a safe, high-yield dividend stock, I think Pfizer (NYSE:PFE) needs to be on your radar. Because of the strong commercial launches of its breast cancer drug Ibrance, the blood-thinner Eliquis, and pneumococcal pneumonia vaccine Prevnar 13, along with the recent acquisition of Hospira, the drugmaker was able to generate a healthy 11% increase in revenue in the second quarter compared to the same period a year ago. And with its top line expected to grow by around 3.4% in 2017, Pfizer's stock is presently trading at a rather reasonable forward P/E ratio of 13.2, making it one of the cheaper large-cap pharma stocks that pays a dividend.

Apart from Pfizer's growing top line, I think the stock's noteworthy yield of 3.4% also adds an important extra layer of value -- especially for investors looking for stable sources of income. After all, Pfizer's enormous cash position of over $20 billion, 12-month trailing free cash flows of nearly $15 billion, and strong growth prospects going forward, all imply that its dividend can be at least maintained at current levels for several years to come. And that's a key feature to consider for any risk-adverse investor.

Summing up, Pfizer's growing top line and sustainable dividend are two good reasons why retirees should be comfortable owning this stock right now.