We all have our own priorities when it comes to saving money. And while it's OK to allocate funds to specific luxuries, there are certain universal things all of us need to be saving for -- namely, emergencies and retirement. That's why it's pretty disturbing to hear that more Americans are saving their money for travel than they are for unforeseen bills and their golden years.

In a new study by SunTrust Banks, 45% of adults say they save their money for travel. Meanwhile, only 37% save for emergencies, and just 30% set money aside for retirement. In fact, travel is such a priority among U.S. adults that it even trumps buying a home or vehicle. 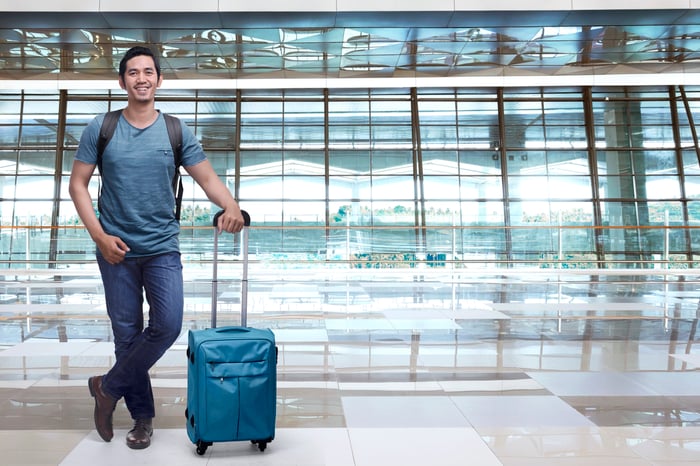 Now on the one hand, it's good that a large chunk of Americans are saving for travel as opposed to charging their trips on credit cards and racking up costly interest in the process. But the fact that so many adults are prioritizing travel over emergency savings and retirement is a major problem -- especially since one-third of Americans report feeling regularly stressed about money.

If you've been focusing your savings efforts on traveling the globe, it's time to rethink where you put your money. Otherwise, you may come to regret that decision -- big time.

Having an emergency fund is so important that it should take precedence over any other financial goal, including retirement. The reason? If you don't have enough money in the bank, you'll most likely be forced into debt the second an unplanned expense lands in your lap.

And make no mistake about it -- there will come a day when you're hit with a financial shock, whether it's your car breaking down, your heating system dying in the heart of winter, or your company laying you off after years of service. That's why you need a minimum of three months' worth of living expenses in the bank at all times, and, ideally, more like six months' worth of expenses. That way, you'll have cash to access when you need it in a pinch.

Even if retirement is several decades away, it's crucial that you begin saving for it as early on in your career as possible. This way, you'll be giving your money time to grow into a large enough sum to sustain you in the future.

And you'll need money of your own to survive in retirement, because while Social Security will provide some income, it won't be enough to sustain you fully. In a best-case scenario, your benefits will manage to replace about 40% of your previous income if you were an average earner. But because there's talk of benefits getting slashed down the line, you can't count on them too heavily. Meanwhile, you'll need about 80% of your former earnings to live comfortably as a senior, so even if Social Security holds steady, you'll still be responsible for funding roughly half of your expenses once your career comes to a close (again, assuming you were an average earner).

Once you're looking at a fully loaded emergency fund, focus your efforts on building a nest egg. You don't necessarily need to stick every spare dollar you come up with into an IRA or 401(k) to have an impact. But you do need to save consistently throughout your career to ensure that you don't fall short when you're older.

For example, if you were to set aside $300 a month starting at age 30 and retire at 70, you'd wind up with $719,000 if your investments generated an average annual 7% return during that period (which is more than doable for a stock-heavy portfolio). And that's a good way to not only buy yourself some financial flexibility as a senior, but some peace of mind at present.

There's nothing wrong with saving money for travel, but don't let your wanderlust cause you to neglect other important goals. Besides, think about it this way: The larger a nest egg you build, the more money you'll have available to travel extensively in retirement, when you won't have a job holding you back.

This Is the No. 1 Thing Americans Save Money For @themotleyfool #stocks Next Article
Current