Whether it's due to downsizing or a series of internal shifts, sometimes even the most talented employees wind up getting laid off. It's never a fun situation to be in, and when you're sitting in that meeting listening to your boss ramble on about how sorry he or she is, it's natural to want to scream and storm out.

But don't. Though it's never easy to be told you're getting let go, the way you react to that news can help your career or damage it even more than that layoff itself. Here's how to conduct yourself if you ever happen to land in such an unfortunate but possible situation. 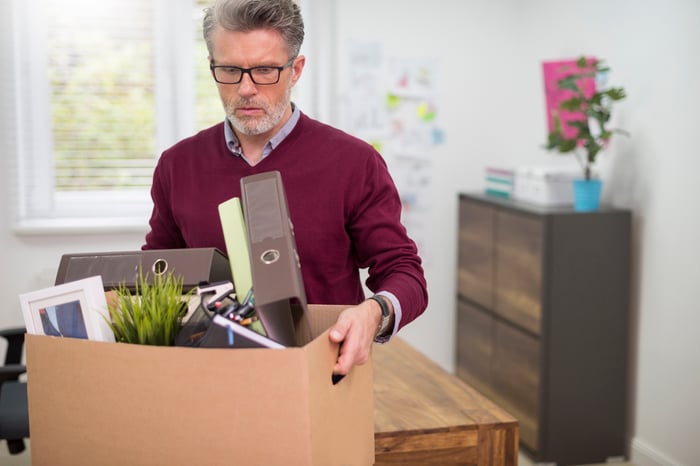 There's a difference between getting laid off and being fired for cause. In the former situation, your dismissal is generally the result of something completely outside your control, and in many cases, outside your manager's control, as well. So when your boss apologizes for the way things seem to have panned out, throw him a bone and recognize that he's probably speaking from the heart.

It's hard not to take a layoff personally, but try to remember that your manager is most likely not the enemy and that getting angry or reacting harshly will only damage your relationship with him or her. A better approach? Take a deep breath and ask for a few minutes to compose yourself before continuing. This way, you'll get to gather your thoughts, which will help you respond appropriately.

If you get emotional before reaching that point, that's OK. Your manager will probably expect some tears, but there's a difference between getting weepy and lashing out.

Even though getting laid off generally doesn't mean that you did something wrong, you are allowed to ask why your role was specifically flagged for elimination. How will this information help you? For one thing, it'll keep you from lying awake at night wondering why you were chosen, but more importantly, it'll give you an opportunity to potentially salvage your job. For example, if your manager tells you she was required to slash folks from the IT help desk, and you happen to also be a networking expert, you can ask her to find another role for you within the company. Of course, you can't count on this happening, but you never know.

Another reason to request an explanation for your layoff is to make sure you're not being discriminated against. It's one thing if, say, your company has made the decision to eliminate its entire in-house copywriting team, but if you're the only woman on that team, and the only one let go despite your seniority, it might prompt you to dig deeper.

3. Understand what's required of you from this point forward

Getting laid off doesn't always mean packing up your desk immediately. There are certain steps your company might require of you, particularly if you want to collect on the severance package it's offering. For example, will your company want you to stay on another couple of weeks? Will you need to sign a separation agreement? Document your processes? Find out how much longer you'll be sticking around and what exactly you'll need to do during that time.

4. Ask for a reference

Losing a job can be a blow to your career, as well as your income, so you'll probably want to start looking for a new role as soon as possible. And that's where your manager can come in handy. Before you bring your discussion to a close, ask your boss if he or she is willing to serve as a reference for you going forward. As long as you have a good relationship and you conduct yourself professionally during that uncomfortable meeting, there's a good chance he or she will say yes.

Getting laid off can be a harsh blow, especially when you least expect it. Knowing how to react can help you minimize the damage and recover as quickly as possible.