It wasn't so long ago that the Great Recession wracked our country and brought more layoffs than the workforce had seen in decades. Even now, with the official unemployment rate back down to a modest 4.3%, countless Americans are still feeling the aftereffects of that period and struggling to recover financially. And that stressful period has only exacerbated people's natural fear of finding themselves out of work in the future.

But surprisingly, it's not older people who were actually in the workforce during the recession who are most concerned about losing their jobs. It's millennials who today spend the most time stressing out about the possibility of getting let go.

In fact, 53% of millennials experience high to moderate levels of anxiety over losing their jobs, according to a recent study by financial services company Northwestern Mutual. When we compare that to the 29% of the general population who are similarly stressed out, it begs the question: Why are younger workers so much more apt to be worried? 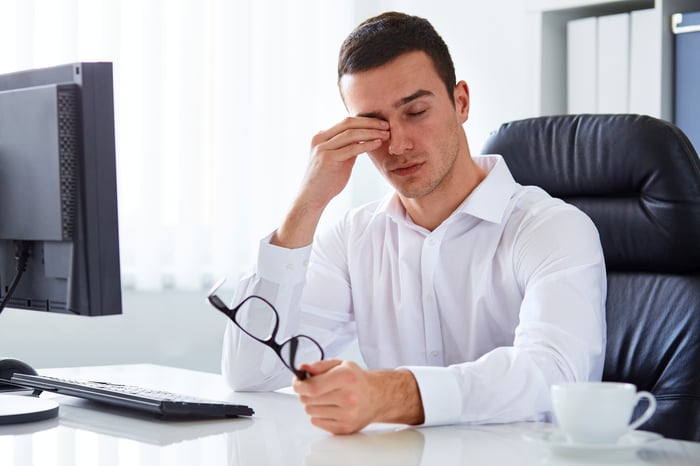 Should millennials be stressed about layoffs?

In some regards, younger workers' tendency to worry about layoffs makes sense. It stands to reason that those with the least experience or tenure might be the first to go if a company downsizes. Furthermore, research from Gallup suggests that 67% of millennials are at medium to high risk of losing a job due to automation down the line.  Throw in the fact that millennials are more likely to have high levels of student debt, and lower amounts of emergency cash, and it's no wonder that fear of getting laid off is keeping so many of them up at night.

On the other hand, recent history tells us that millennials tend to have an easier time recovering from layoffs than older workers. After the Great Recession hit, the average laid-off worker who was 55 or older remained unemployed for 40.6 weeks, compared to just 31.6 weeks for younger workers. In addition, a study by the Urban Institute found that workers between the ages of 25 and 34 are 20% more likely to find new jobs than seasoned professionals in their 50s.

And that makes sense as well. Companies are often hesitant to sink time and resources into older employees who might end up being just steps away from retirement. Millennials don't pose the same risk, but they do carry a reputation for being flighty, so while they have much to offer in the way of fresh ideas and energy, they're not always viewed as the ideal pick.

At the end of the day, however, millennials shouldn't really be more concerned with layoffs than the rest of the population. If you're one of those people stressing over the idea of getting pink slipped, you'd be better off spending that energy coming up with ways to do better at work. While it's true that sometimes even the most experienced and respected employees can fall victim to layoffs, you'll gain a degree of protection if you do your part to make yourself valuable to your company. This could mean volunteering to take the lead on new projects, building relationships with other teams, or growing your skill set to make yourself a more well-rounded employee.

Having a healthy network of business contacts can also provide some peace of mind. In 2015 and 2016, an estimated 85% of jobs were filled via networking, so it pays to make an effort to get to know the right people in your industry.

Of course, the most stressful aspect of getting laid off is the loss of income that comes with it. That's why it's critical to establish an emergency fund with enough cash to cover three to six months' worth of your living expenses. This way, if it does take you some time to find another role, you'll have a means of paying the bills in the interim.

Beyond that, it can also buy you some flexibility regarding your next job. If you lack cash reserves, you might feel compelled to accept the first offer that comes your way just to snag a paycheck, even if it isn't a good fit. On the other hand, if you have some savings to work with, you'll feel less pressure to take a job you don't want because you're desperate for the money.

If you map out your current expenses and start cutting corners, you should be able to save small amounts of cash on a regular basis that will amount to a sizable sum over time. Or, consider the now-ubiquitous "side gig" option. An estimated 44 million Americans currently have some form of second job, and of those, 36% earn more than $500 extra a month from them. If you're willing to put in the time, that sort of cash might help you establish that safety net fairly quickly.

Though nobody is immune to layoffs, rather than worrying about losing your job, you're better off focusing on the ways you can succeed at your company while building up a savings cushion that can tide you over just in case. The good thing about being young is that you still have decades in the workforce ahead of you, so if your career hits a snag, you'll have more than enough time to recover.

Guess Which Workers Worry the Most About Losing Their Jobs? @themotleyfool #stocks Next Article
Current