Many of us do the same thing year after year: We resolve to get better about money matters, improve for a couple of weeks, or maybe even months, and then let those good habits lapse. Much of that colossal (and perhaps universal) failure rate for New Year's resolutions can be traced back to setting unrealistic goals and expectations. With that in mind, here are a few reasonable financial promises to yourself that you might be more likely to keep.

Only 41% of American households follow a budget despite the fact that it's one of the most effective money management tools out there. Why such resistance? A good 36% of Americans feel that budgeting is too much work, when in reality, it doesn't have to take much more than an hour to set up a budget, and then another 30 minutes each month to revisit it. 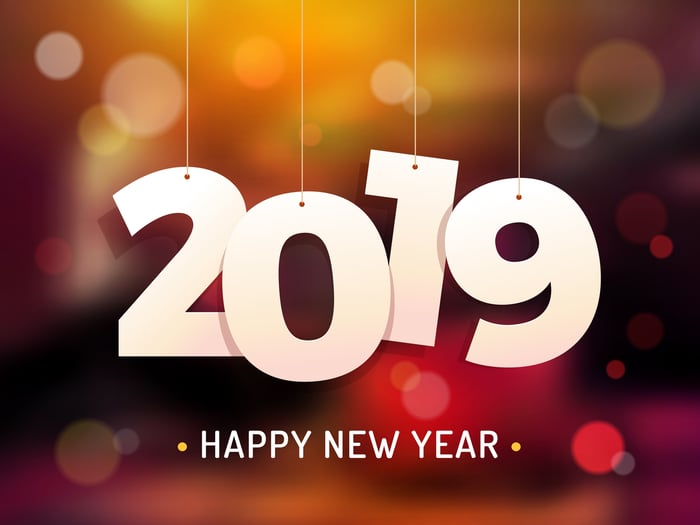 Creating a budget means listing your recurring monthly expenses, factoring in one-time expenses, such as your annual warehouse-club membership fee, and comparing your total spending to your post-tax income. The figures you use should be rooted in reality, which means you'll need to check your bank and credit card statements to get an accurate sense of what you spend across various categories (think food, home maintenance, entertainment, and so on).

Once you have that framework in place, you'll see where your money is going and where you have room to cut corners if you aren't saving enough. You might be surprised by how much you're spending in one area, and find that you could reallocate those resources to saving or something you're more passionate about.

Don't only look at your budget as a tool that helps you cut back on expenses; it could actually unearth different opportunities you might have otherwise been scared to pursue. For example, if you're eager to move to a bigger home with a heftier mortgage, you might write off that option thinking it's too expensive. If your budget reveals that you can afford to spend $500 more a month on housing and still meet all of your other obligations and savings goals, you'll have an easier time making that leap.

An estimated 40% of U.S. adults don't have the money on hand to pay for a $400 emergency. If you're one of them, boosting your cash reserves should take priority over all other financial goals in the coming year. Even if your savings account balance is above that threshold, if you don't have a minimum of three months' worth of living expenses tucked away in the bank, you're running the risk of landing in debt should you encounter a whopping home repair, wreck your car, or get unexpectedly laid off.

Now, if you're starting with little to nothing, you're likely not going to build a true emergency fund overnight. But what you can do is examine your budget and start looking for expenses you can trim so that you can contribute to an emergency fund. Unfortunately, we're not talking about eliminating your morning latte every other day. If you're determined to build out a solid safety net, you might need to make some serious changes, like downsizing your home or unloading a car.

Social Security won't provide enough income for you to live on in retirement, and it's not because the program is going broke. Rather, those benefits are designed to replace only about 40% of the average worker's pre-retirement income. Most folks need roughly double that amount to live comfortably during their golden years. That's why it pays to step up your retirement savings game, particularly if you're on the older side with a balance that's lower than you'd like to admit to.

If you don't have the means to max out a 401(k) or an IRA, pledge to save more than you did the previous year and work your way up from there. Any additional amount you can save is a step in the right direction. But don't just save more money this year; save more effectively. If you're at least a decade away from retirement, go heavy on stocks in your investment portfolio, as doing so will produce a substantially higher return than you'd get with safer investments, like bonds.

Furthermore, don't let yourself off the hook from retirement savings just because you're younger and decades away from that milestone. If you begin saving at an early age, even if you're contributing a modest amount over time, you'll still be able to amass substantial wealth.

The table below illustrates the point, using a 7% annual return rate. That's a couple of percentage points below the stock market's average, which is another reason to focus on stocks rather than play it safe.

The average American has $5,551 in credit card debt, and that's bad news, because that sort of debt not only costs money via interest charges but also has the potential to bring down your credit score. If you're saddled with debt, paying it off will save you from an unhealthy cycle where you're adding to your outstanding tab by the day. (That's right -- credit card interest compounds daily, so once you start carrying a balance, it's hard to dig out of that hole.)

To effectively eliminate debt, review your outstanding obligations, identify those with the highest interest rates, and pay them off first. You might also look into transferring various balances to a single card with a lower interest rate than what you're now paying. Of course, to chip away at that debt, you'll need extra money, which you can get by slashing expenses (there's that budget again!) or perhaps adding a second job. A combination of both works even better. For more ideas on how to start tackling your debt, head here.

How often have you thought, "If only I could go back to school or pursue an advanced degree..."? If money is the one thing that's stopping you, make some of the aforementioned changes this year and use your savings to invest in your career. You can get a master's, obtain some new professional licenses or certifications, or buy yourself updated equipment to make your day-to-day work more effective and efficient. And who knows? Your earnings might subsequently increase enough to more than make up for the money you spend.

If you have a glaring track record of failing at New Year's resolutions, make 2019 the year you turn things around. With some determination, you'll succeed in sticking to some of these pledges so that you really have something to celebrate come 2020.