Most of us are used to borrowing money in some capacity, whether it's mortgaging our homes or bumming a few bucks off a friend when we realize we left our cash at home. Well, just as borrowing is a part of life for everyday people, it's a practice companies and municipalities uphold, as well. Even the federal government does it. How? By issuing bonds.

Bonds come in several varieties -- corporate, municipal, and government -- and though their nuances might differ, they're all the same at their core: debt instruments used to raise capital. When an entity issues a bond, it asks for a certain investment of money. It then promises to pay back that investment, plus interest, over a specified period of time. Here, we'll dive into the world of bond investing so you can determine whether they should have a place in your portfolio. 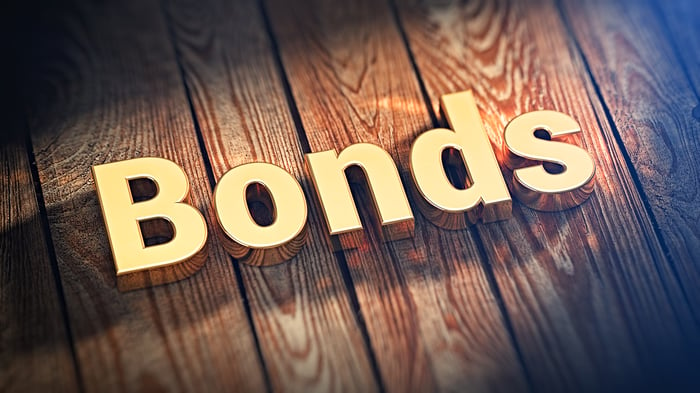 When you buy a bond, you're loaning a sum of money to its issuer for a predetermined period of time. In exchange, the issuer promises to make regular interest payments at a predetermined rate until the bond comes due, and then repay your principal upon maturity.

Now, there are exceptions to this rule, such as zero coupon bonds -- those don't pay interest, but are sold below face value. Most bonds, however, follow the same formula: You invest a sum of money, collect interest payments on it, and get your money back upon maturity.

How to make money from bonds

There are two ways to make money by investing in bonds. The first is to hold those bonds until their maturity date and collect interest payments on them. Bond interest is usually paid twice a year.

Bonds come in a variety of options, each with its own set of benefits and drawbacks.

How to buy bonds

Given that stocks are traded on a public exchange, they're fairly easy to buy and sell. Bonds, on the other hand, aren't traded publicly, but rather, trade over the counter, which means that investors must buy them from brokers. Treasury bonds, however, are an exception -- you can buy those directly from the U.S. government without going through a middleman.

The problem with this system is that, because bond transactions don't occur in a centralized location, investors have a harder time knowing whether they're getting a fair price. A broker, for example, might sell a certain bond at a premium (meaning, above its face value), while another broker might charge an even higher premium.

Thankfully, the Financial Industry Regulatory Authority (FINRA) regulates the bond market to some extent by posting transaction prices as that data becomes available, but investors can sometimes experience a lag in getting that information. This isn't a reason not to buy bonds, but it's something to be aware of.

How to evaluate bonds

Although bonds are considered a lower-risk investment than stocks, they're by no means risk-free. All it takes is for a bond to default, and you, as an investor, could be out some money. So how do you know which bond issuers are the most and least likely to fall down on their obligations? The best indicators are your bonds' ratings.

A bond rating is a score of sorts that measures the financial strength of the entity issuing the bond. There are three major bond ratings agencies: Standard & Poor's, Moody's, and Fitch. These agencies use a combination of letters, numbers, and symbols to indicate the creditworthiness of bond issuers.

Standard and Poor's and Fitch use a similar ratings system that ranks bonds from best quality to worst as follows:

From there, numbers and symbols are added to further break down a bond's individual rating. Standard and Poor's and Fitch use plus and minus signs to establish a hierarchy of creditworthiness so that a bond rated A+ is better than one simply rated A or A-. Moody's uses numbers to convey the same point, with Aa1 being the best Aa rating, followed by Aa2 and Aa3.

Generally speaking, the higher a bond's rating, the safer an investment it is. But highly rated bonds also tend to offer lower interest rates than bonds with lower ratings. That's because investors are rewarded for taking on the additional risk associated with poorly rated bonds. In fact, bonds rated below BBB- or Baa3 are known as junk bonds, which means they're not considered investment grade, but have the potential to offer much higher yields.

Although reviewing a bond's rating can help you decide whether it's a good investment, it's not a perfect system. Circumstances can change over time, and a bond with a strong rating one year can get downgraded the next year. If you're going to buy bonds, keep tabs on how they're doing ratingswise. If you see that a bond you own keeps dropping on the ratings scale, you may want to unload it before it defaults or loses too much value.

Benefits of investing in bonds

One advantage of putting bonds in your portfolio is that they're a relatively safe investment. Bond values don't tend to fluctuate as much as stock prices, so they're less likely to keep you up at night worrying.

Another benefit of bonds is that they offer a predictable income stream. Because bonds pay a fixed amount of interest twice a year, you can generally rely on that money to come in as expected. Municipal and Treasury bonds offer the additional benefit of paying tax-exempt interest to varying degrees.

Drawbacks of investing in bonds

Though there are plenty of good reasons to invest in bonds, there are some disadvantages you should know about, as well. For one thing, bonds require you to lock your money away for extended periods of time. For example, if you buy a bond with a 10-year term, you're committed to keeping that money invested for 10 years. With stocks, you're not locking in to a specific time frame -- you can buy a stock one day and sell it two weeks later if you see fit. (Of course, there's always the option to sell your bonds once you buy them and get your investment back that way. But then you're taking the risk that the market value won't go down.)

Speaking of risk, because bonds are a relatively long-term investment, you'll face what's called interest-rate risk once you buy them. As we just learned, each bond pays a certain amount of interest. But what happens if you buy a 10-year bond paying 3% interest and a month later, that same issuer offers bonds at 4% interest? Suddenly, your bond drops in value, and if you hold it, you'll lose out on potential earnings by getting stuck with that lower rate.

Furthermore, while bonds are a relatively safe investment, they're not completely risk-free. If an issuer defaults on its obligations, you risk losing out on interest payments, getting your principal repaid, or both.

Another key point to consider is that bonds aren't all that conducive to long-term investment growth. That's because the return on investment you'll get from bonds is substantially lower than what you'll get with stocks.

Consider this: Between 1928 and 2010, stocks averaged an 11.3% return, while bonds averaged just 5.28%. Now, imagine you're able to save $300 a month for retirement over a 30-year period. If you load up on bonds and average a 5.28% return during that time, you'll wind up with a $251,000 nest egg. But if you go with stocks instead and score an average annual 11.3% return on investment, you'll grow your retirement account to $759,000. And that's important, because without that growth, you'll have a hard time keeping up with inflation and maintaining your buying power when you're older.

One final drawback of buying bonds is that, due to the way they trade, there's less transparency in the bond market than in the stock market. As such, brokers can sometimes get away with charging higher prices, and you might have a harder time determining whether the price you're quoted for a given bond is fair.

Are bonds right for you?

Clearly, bonds have their pros and cons, so the question remains: Should you invest in bonds? There are a number of scenarios where doing so makes sense. First, if you're heavily invested in stocks, bonds are a good way to diversify your portfolio and protect yourself from market volatility.

Furthermore, if you're the risk-averse type who truly can't bear the thought of losing money, bonds might be a more suitable investment for you than stocks. Of course, the safest investment you'll come across is none other than cash in the bank, but bonds typically pay better when it comes to interest.

Another reason to consider bonds is if you're near retirement or already retired. At that point in your life, you may not have the time to ride out stock market downturns, in which case bonds are a safer place for your money. In fact, most people are advised to shift away from stocks and into bonds as they get older, and it's not terrible advice provided you don't make the mistake of dumping your stocks completely in retirement.

One disadvantage of buying bonds is having to lock up your money for what could be a longer period of time. That's why it often pays to build a bond ladder.

This way, if interest rates rise during that total investment window or other opportunities come up, you'll have better access to your money than you would by putting all of your cash into a single investment.

The challenge of buying individual bonds is that investors need to vet each individual issuer. That's why many investors prefer to put their money into bond funds.

With a bond fund, investments are pooled into a single bucket and are used to buy various bonds. The benefit of bond funds is that they offer diversification within the bond market. Imagine you buy bonds from a single issuer, and that issuer defaults. Suddenly, you're out of luck. But if you own a fund that's invested in many bonds, and only one defaults, the impact won't be nearly as severe. On the flip side, bond funds are subject to the same interest-rate risk we talked about before.

The bottom line on bonds

Though there's a downside to buying bonds, in many cases, bonds can be a solid addition to your portfolio. It pays to explore your options for investing in bonds so that you can reap the various benefits they offer, both now and in the future.