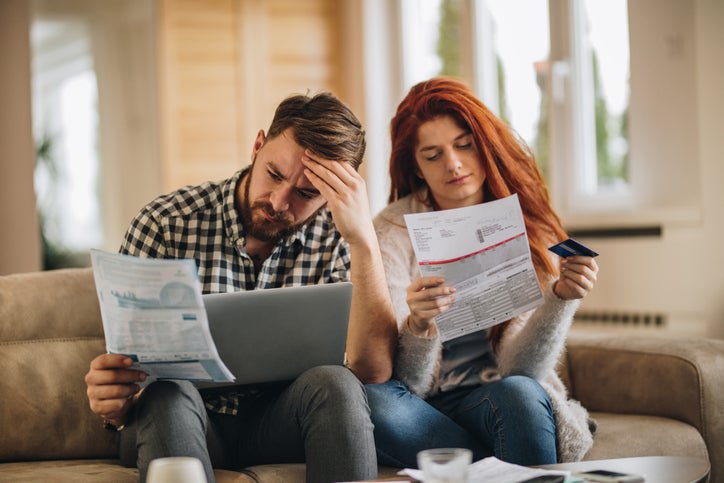 Americans have borrowed a lot of money. This probably doesn't come as a big surprise, especially if you've got quite a bit of debt yourself. But recent research from Northwestern Mutual contains some shocking statistics about both how deep in the hole Americans are and how their borrowing could affect their financial lives.

Here are three troubling bits of data about the debt burden many people are dealing with every day.

1. Americans with debt are spending way too much of their monthly income on it

According to Northwestern Mutual's data, Americans who carry debt are spending a whopping 33% of their monthly income to repay their creditors. And that doesn't include mortgage debt.

When you consider that most experts recommend saving 20% of your income and spending up to 30% on housing expenditures, it's easy to see why devoting 33% of your monthly money to debt could be a huge problem. It would mean you're spending more paying off old bills than what you're supposed to spend on housing. It would also mean if you follow these other guidelines, you'd have just 17% of your income available to cover every other expense from insurance to healthcare to food and transportation.

Obviously, that's not what most people are doing. Instead, when you've committed $0.33 of every dollar you earn to paying creditors, chances are good you're sacrificing saving and perhaps continuing to borrow more money to cover necessities. This is a huge problem. It means the cycle of borrowing is likely to continue forever as your current income is used to cover past obligations rather than to meet your immediate needs.

The only way to break this cycle is to get really aggressive about paying down what you owe and commit to not borrowing more. You may have to work some extra hours or take a side job to make meaningful progress on resolving your debt issues if you're currently devoting 33% of your income to paying creditors. But making this sacrifice is worth it if you can free up the huge portion of your paycheck that no longer belongs to you.

2. Those who've borrowed owe way too much

Northwestern Mutual also reported that Americans who owe money have an average balance of $26,621. With the Bureau of Labor Statistics reporting median weekly earnings of all workers at $994, that would mean that the typical American would have to devote more than half a year's earnings just to paying off their debt balance. That's obviously not going to happen.

With so much money owed, it's not surprising that people are using too much of their monthly income to pay creditors. It also means that those who've borrowed are paying a small fortune in interest. After all, carrying a $26,621 balance would mean you'd get stuck paying thousands of dollars in interest every year even at a relatively low interest rate.

Again, paying off your balance is the only way to deal with this problem. However, you may want to look into refinancing your debt as you work on the payoff process. When you owe a lot, reducing your interest rate even a little bit by securing a low-interest personal loan or using a balance transfer credit card could make a huge difference.

3. 13% of Americans expect to be in debt for the rest of their lives

A whopping 13% of Americans anticipate being in debt forever. That would mean that even as retirees, they'd be paying interest to creditors. And they might pass away never having paid their balance in full.

It's not surprising so many people expect to be in debt forever. When you owe a lot of money, becoming debt free may feel hopeless. But you don't have to resign yourself to owing money for the rest of your life. You can and should work on making a debt payoff plan ASAP.

If you live on a budget and work to pay extra toward your monthly debts, hopefully you can succeed in repaying what you owe so you won't end up with creditors being in your life forever.