Everyone wastes money. Some people are more careful with their funds than others, yet the money we spend on unnecessary or frivolous purchases can quickly add up.

To get a feel for how and why the majority of us waste money, we surveyed 1,015 individuals about their spending habits. We explored the habits that most people consider wasteful, how prevalent those habits are, and the factors that contribute to them. Read more to see how your own spending habits and the motivating factors behind them stack up to our respondents'.

The land of plenty

Americans are fortunate to live in a nation where most items are plentiful. Except for fine dining establishments, many restaurants serve their customers more food than they can or should consume in one sitting. And is purchasing brand-name products a good use of funds when less expensive options are available? 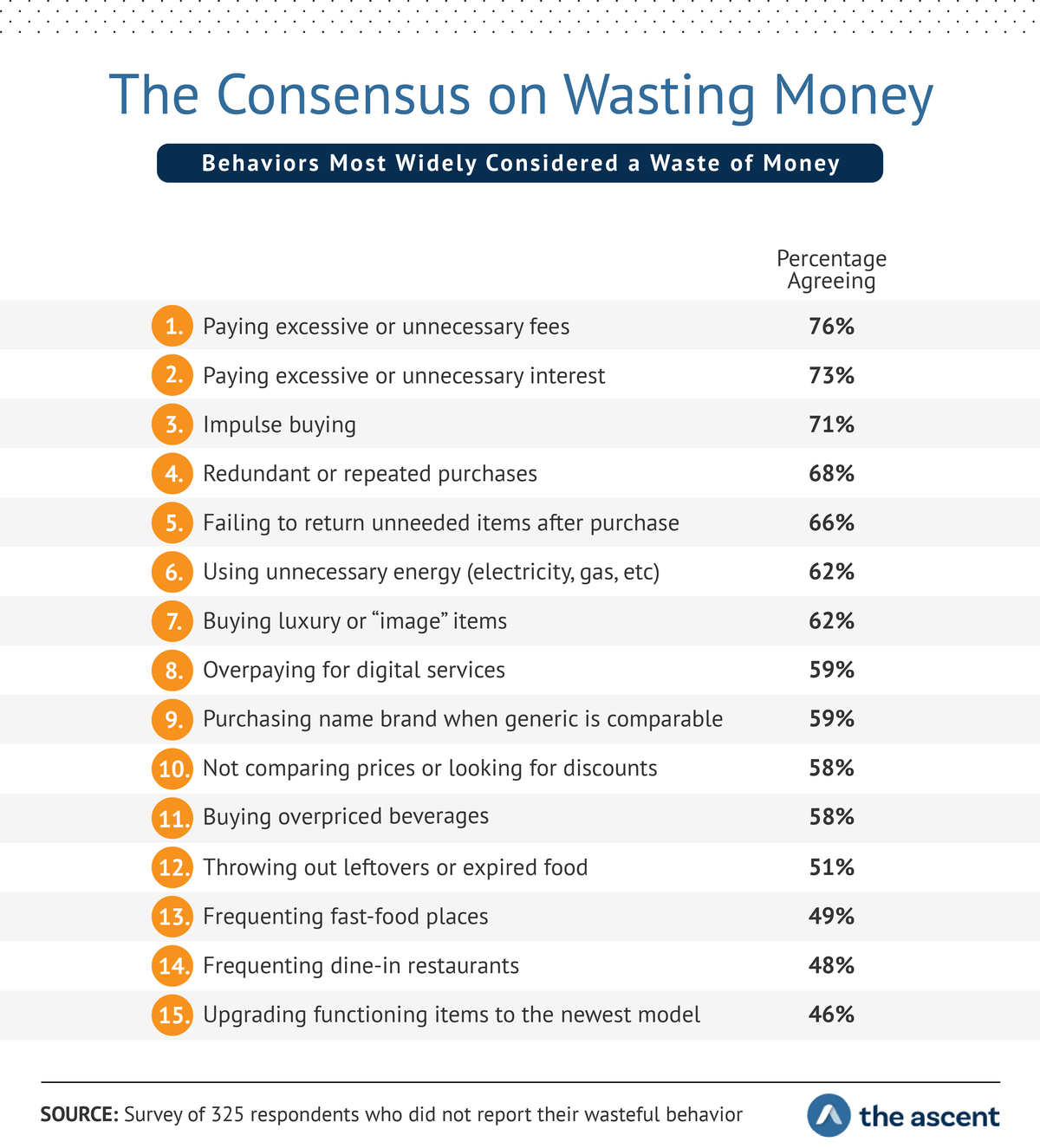 To understand wasteful spending, we first needed to determine what the majority of folks considered to be "wasteful" in the first place. The most commonly agreed-on examples included paying too much for certain fees, paying a higher interest rate on financed items, forgetting to return things that don't fit or can't be used, and even consuming excess energy.

An independent study suggested misunderstanding food labels leads to increased food waste. No one wants to eat tainted or bad food; however, a majority of consumers tend to dispose of food near the "best if used by" date on the package. These recommended dates aren't federally regulated and are merely guidelines placed on the package by the manufacturers.

Respondents also mentioned other areas they considered wasteful, such as overpaying for luxury items when others serve the same purpose, paying for overpriced beverages, and upgrading to the "latest and greatest" product when the one they have still suffices.

Sure, most of us can name a lot of habits that we consider wasteful or areas where we believe other people are overspending, but which are the most common? 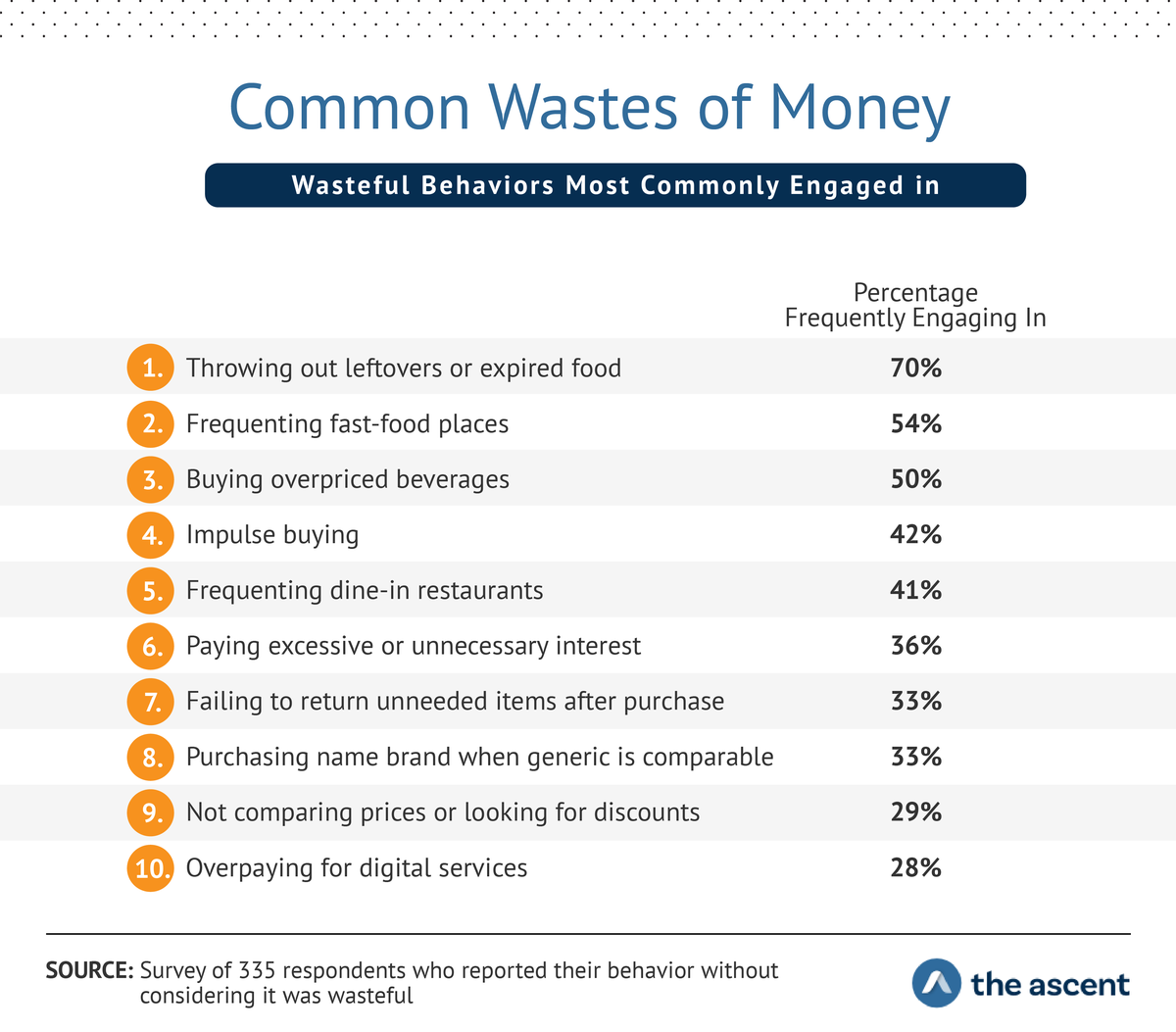 How often do you bring extra food home only to toss it in the trash weeks later because it's stale or covered in green mold? A staggering 70% of respondents confessed their guilt in this area.

Although a fast-food chain's new menu items may look delicious in advertising campaigns, nutritionists and health experts recommend enjoying fast food, at most, occasionally. However, 54% of our respondents admitted to spending too much money at such establishments. The same applies to other types of dine-in eateries, as noted by 41%.

Professional marketers are trained to design ads and copy to entice us to make impulse purchases. Can most people honestly claim they compare prices and quality before purchasing something? Almost 30% of respondents admitted to not doing so very often.

A majority of Americans use credit cards instead of cash to purchase items. When was the last time you compared credit card interest rates and fees to make sure you have the best card for your spending habits? Over one-third believed they pay, or have paid, excessive or unnecessary interest rates.

Would it surprise you to see almost two-thirds of those surveyed confessing to wasting "a considerable amount" of financial resources in their lifetime? 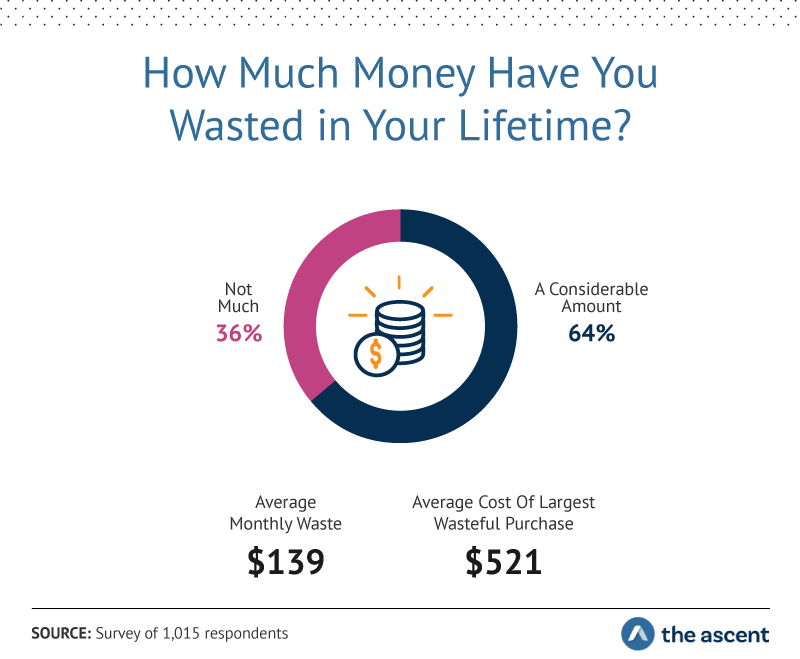 Respondents estimated their average monthly waste at $139 per month, while noting the average cost of their most significant waste was $521. It's easy to see how wasteful spending can add up over a lifetime.

Have you wasted money on anything this week? Almost 60% of respondents said they had, while only 22% were confident they'd spent every penny wisely. 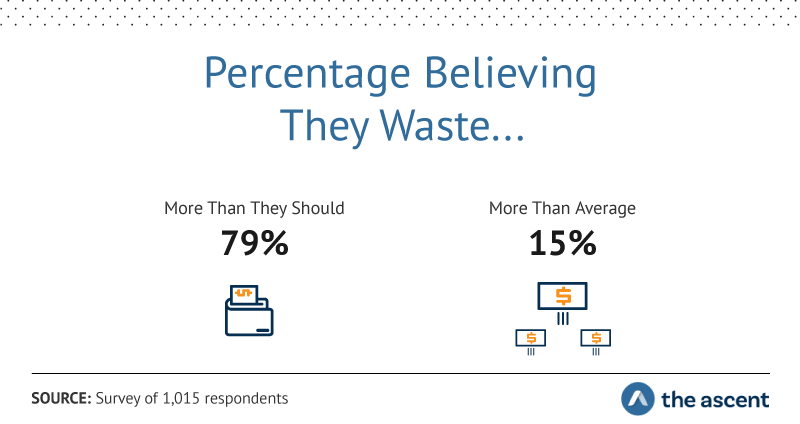 While almost four-fifths of respondents said they regularly waste more than they should, only 15% believed their waste is higher than average. Most of us may be able to accept that our spending isn't as responsible as it should be, but we're even more likely to believe that our reckless spending isn't as bad as that of others.

If less of your hard-earned money were wasted, would you be able to spend more on things that make you happier? According to 3 in 4 respondents, the answer to that question may be "yes." 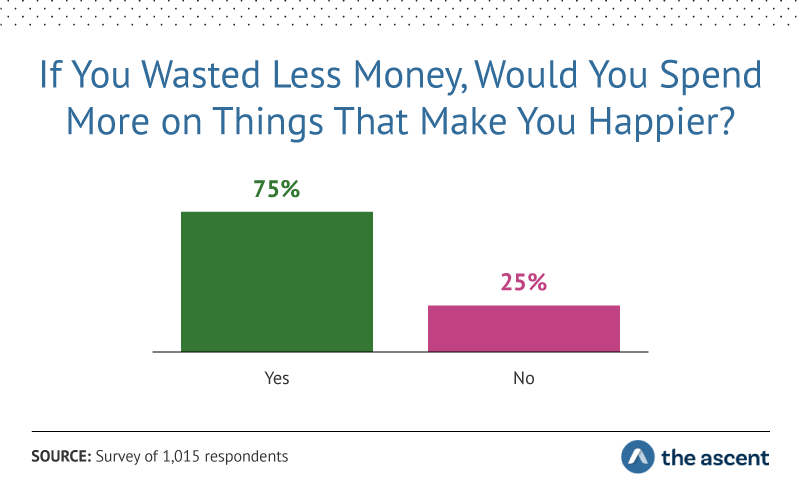 Purchasing that designer purse or splurging on that round of drinks at happy hour seemed like a good idea at the time. But now that your bills are starting to exceed the balance in your bank account, buyer's remorse has begun to set in.

If you feel guilty about the money that you may have wasted, you're not alone, because 55% admitted to experiencing a negative consequence as a result of wasteful spending. 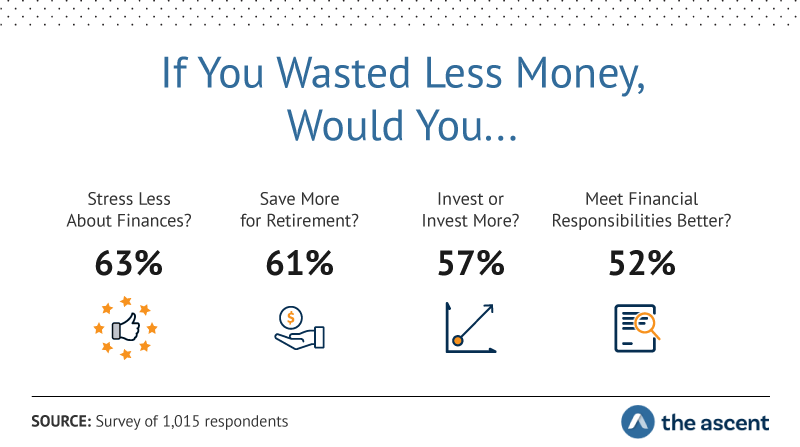 Over half of respondents admitted they could better meet their financial commitments if they spent more carefully. A majority of respondents would allocate additional funds to savings and retirement, and 63% would stress less about their overall financial situation.

Saving money for a rainy day or retirement can be challenging. Sure, automatic deductions into a company-sponsored 401(k) or individual retirement account (IRA) make saving a bit easier, but what about the extra money you could be socking away?

Why do we spend too much?

The reasons vary, but it most often comes down to one (or both) of two reasons: desire and convenience. 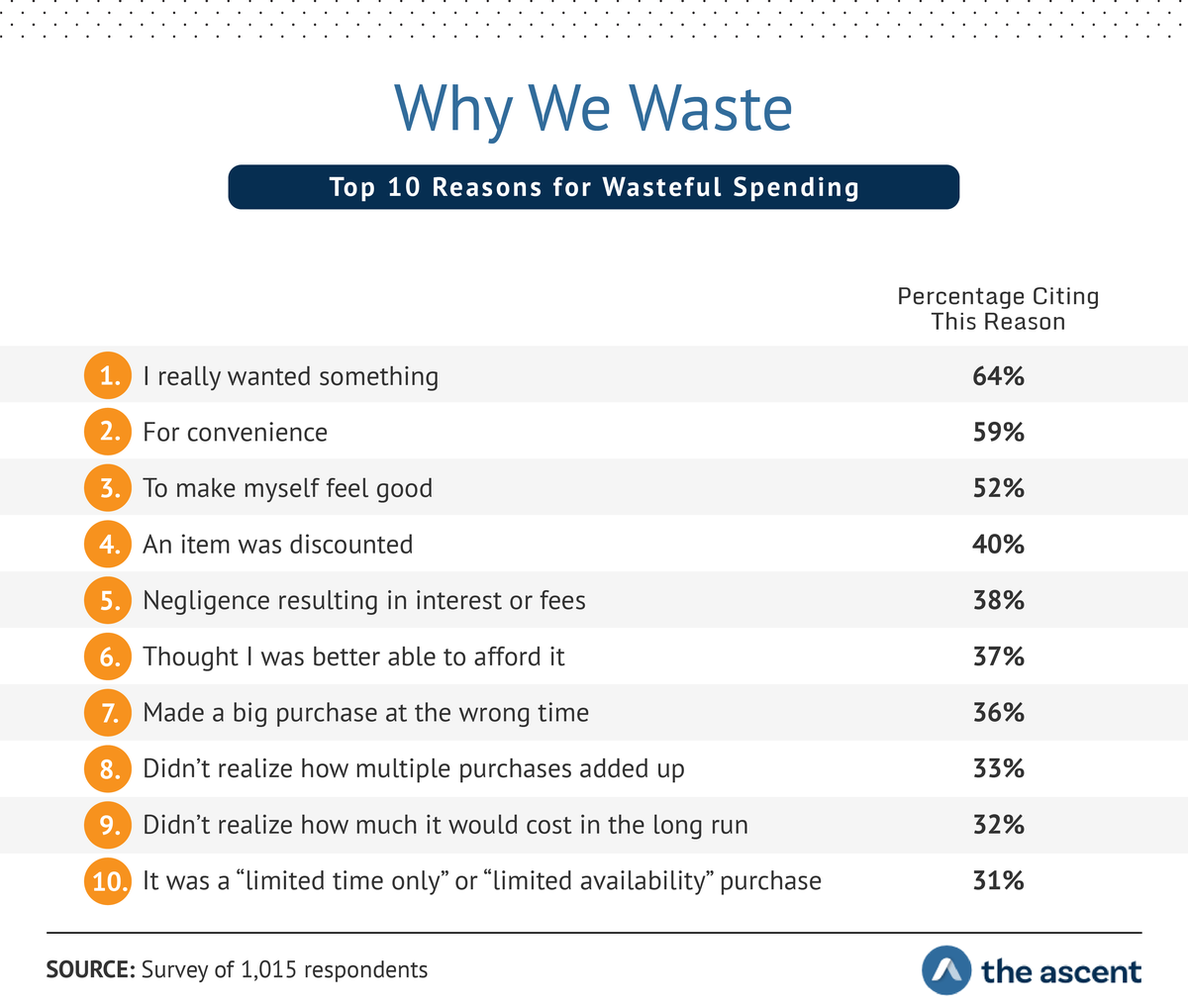 Few can deny that one reason Americans spend more than they should is peer pressure. Do you recall the phrase, "Keeping up with the Joneses?"

That might explain why almost two-thirds of survey participants (the top response) said they wasted money merely because they wanted something. Slightly over half admitted it made them feel good.

Don't think practicality isn't a factor. Have you ever heard a spouse, partner, friend, or family member brag about getting a "great deal" on an unplanned purchase?

Is paying half price for an expensive item a fantastic deal when you probably shouldn't spend the money in the first place? It was rationalized by the 40% who indicated they bought something because it was discounted or on sale. Oh, and let's not forget the 31% who were sold on the fact that an item was "only available for a limited time."

Next are the one-third who spent smaller amounts on multiple purchases, not realizing the total amount was quickly entering the "wasteful spending" category.

Many people are driven by a desire to satisfy themselves, often in the form of material possessions. When asked about their thought process behind purchases, a majority of people were willing to admit that their desire to make the purchase outweighed their logical side. 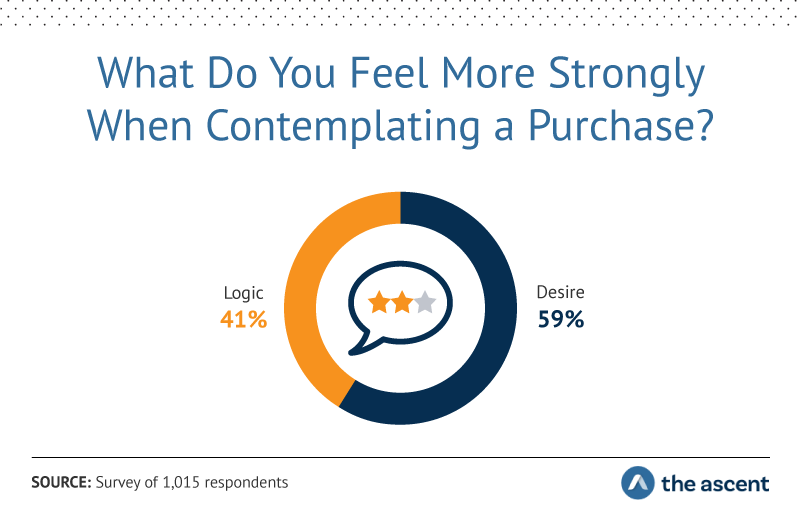 There you are in your favorite clothing shop admiring the new coat that has appeared on the screen each time you've logged into your favorite website. You're now in the hands of an accomplished digital marketing professional who recognizes that desire is stronger than logic. That "I just have to have it" feeling is something most of us have felt and know well, with nearly 4 in 5 respondents admitting they've felt it.

A substantial number of people -- 87% -- admitted to having made an impulse purchase they regretted. When taken in context with the fact that desire trumped logic among most respondents, it's easy to see how almost all of us have given in and indulged in a purchase that we later wished we hadn't.

Marketers pay close attention to why consumers buy on impulse, hoping to encourage the habit -- often quite successfully. However, mental health experts attribute some impulse purchases to anxiety and unhappiness and suggest that controlling those impulses will improve your emotional and mental health.

Is there a product available for purchase that you believe would make you happier than you are currently? Almost two-thirds of our respondents reported that to be the case.

Consumers and their money are predictable

A person's financial status can often be predicted by their spending habits. For example, 86% who reported they waste less than average said they meet their financial obligations promptly, compared to 59% who overspend. 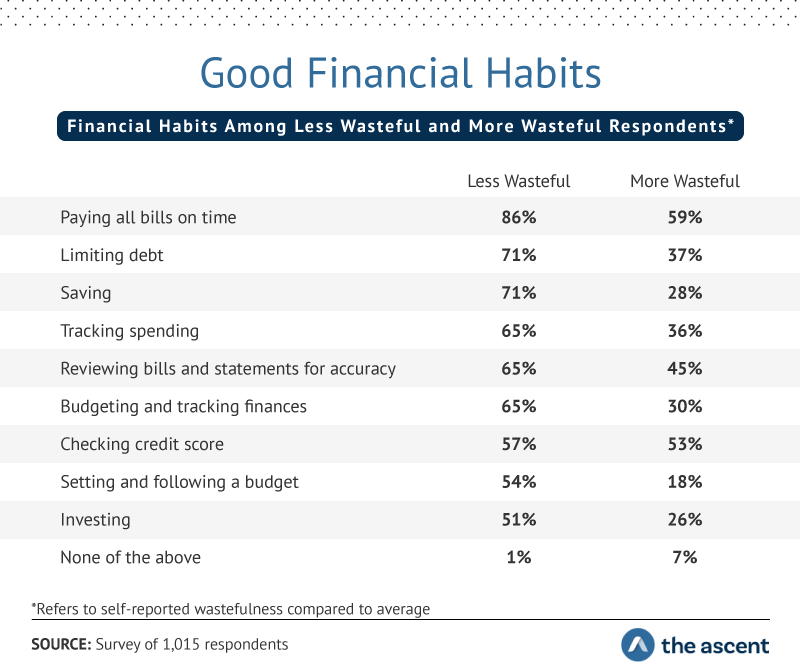 Consumers who routinely make sound financial decisions understand that budgeting and tracking their spending is essential. Practices such as keeping a conservative debt-to-income ratio not only allow you to save more money, but also impact your credit score and help determine whether you can qualify for a mortgage or an auto loan.

One area many people neglect is checking the accuracy of billing statements. After all, we're all human, and humans occasionally make mistakes. Before making a payment or paying off an entire balance, most experts agree that it's a great idea to review the statement against the purchase receipt to confirm the totals match.

Paying your debts on time is important for many reasons. One of the most important is the impact that timely payments have on your credit score, which ranges from 300 to 850. An "excellent" score is often considered to be 800 or higher, 740 to 799 is considered "very good," and a score of 670 to 739 falls into the "good" category. Creditors, financial institutions, and even potential employers often check credit scores, using them as an indicator of financial trustworthiness.

A poor credit score often results in higher interest rates on credit cards and loans, thus costing you more money in the long term. A good rule of thumb is never to spend more than you can afford. If you must finance a large purchase, it's wise to pay the balance off as quickly as possible and never make a late payment, as additional fees are almost always added for submitting payment after a specific date.

Using your money wisely isn't complicated, but it does take some work. Create a reasonable budget that includes putting money into some type of savings account, keep an eye on your discretionary spending, and allocate as much as possible to tax-free retirement funds.

That's not to say that splurging now and then will create a significant financial burden, but with proper planning and minimal impulse buying, your bank account and your level of happiness can grow.

When you're looking for sound advice on loans, credit cards, banking, or brokerage accounts, we're here to help.

For this study, we surveyed 1,015 respondents about their wasteful spending habits. To help ensure accurate responses, all respondents were required to identify and pass a carefully disguised attention-check question. Believing that one wastes money was not a prerequisite for taking this survey.

These data rely on self-reporting. Potential issues that may arise from self-reported data include but are not limited to: selective memory, telescoping, and attribution errors on the part of respondents. These data are intended to be used for entertainment purposes only.