Why Swipe? American Credit Card Preferences and Habits by Generation

From cars to mortgages, credit is everywhere. Credit scores in America have hit an all-time high since the Great Recession, despite credit card debt also setting records. In 2018, the average American had roughly $6,000 in credit card debt, an almost 3% rise from the year prior.

The generation often making headlines may not be the one racking up the most debt. But debt is only one drawback of owning and using a credit card, and it doesn't always outweigh the benefits that swiping plastic can bring. So how does each generation approach credit cards, and how do their preferences differ? We surveyed 1,000 Americans who owned at least one credit card to measure their spending habits and financial well-being. Keep reading to see what we found. 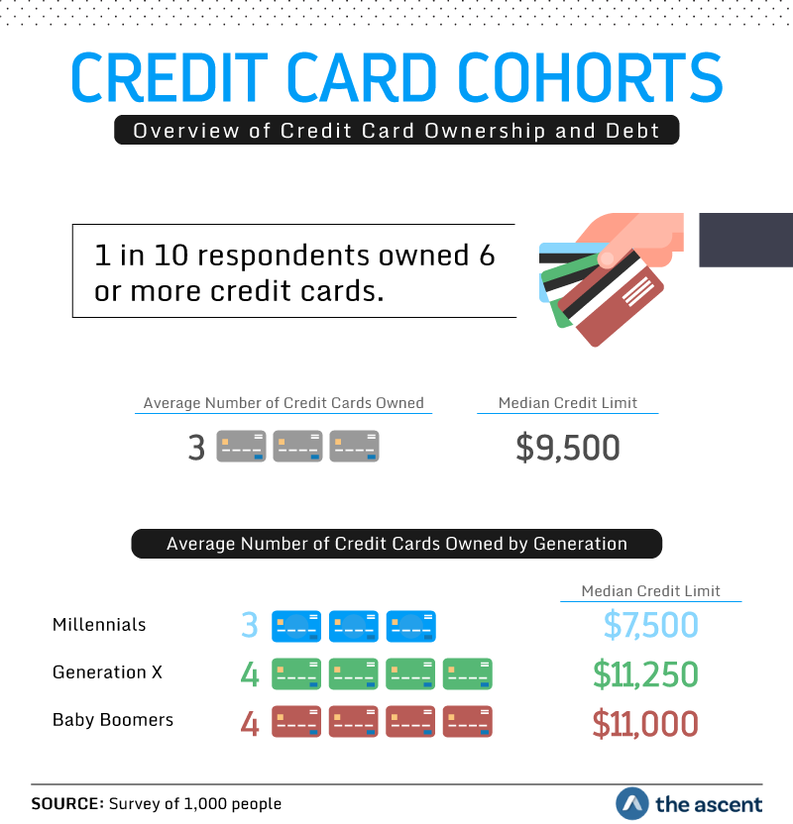 Most would think having more than one credit card would make it more difficult to juggle payments -- especially remembering to make them on time -- therefore hurting your credit score. It turns out, though, having more than one credit card can actually boost your credit score by giving you more credit to work with and more opportunities to prove your management skills.

According to our study, the average American owned three credit cards with a median credit limit of $9,500. Gen Xers and baby boomers owned an average of four credit cards and had fairly higher credit limits than their millennial counterparts. Of course, credit limit increases come with time and experience, so the generational difference is likely due to age.

Millennials also had lower debt than the older generations, with only 56.7% holding some amount of credit card debt. Gen Xers had the most, with almost 68% of the generation owing money on credit cards. On average, cardholders across all generations owed around $6,000, matching the national average. Millennials still ranked lower than Gen Xers and baby boomers, with around $5,500 in debt, compared to $6,600 for Gen Xers and $6,800 for baby boomers.

Nearly 1 in 5 respondents actually depended on their credit card to pay for basic living expenses, which could benefit or hurt them, depending on the bills they choose to pay. 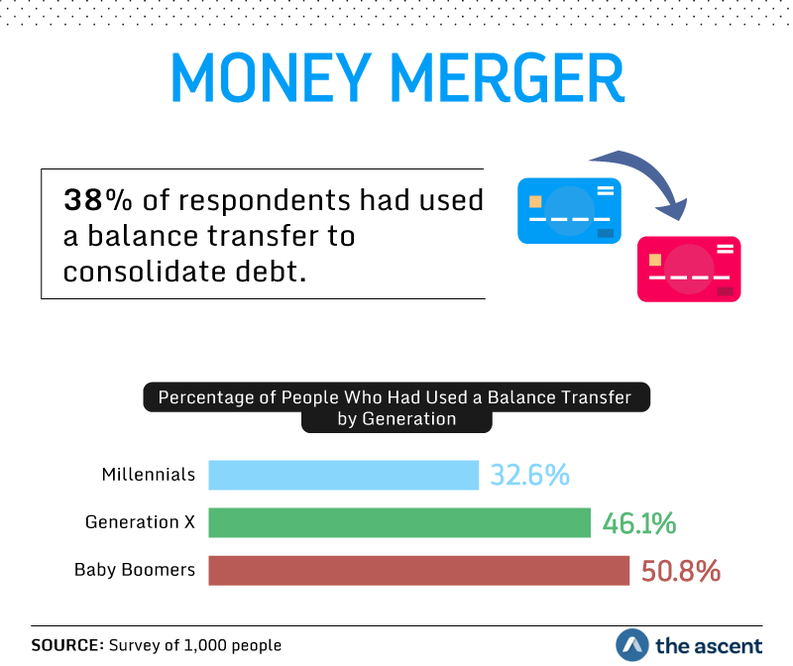 Racking up debt on the wrong card can leave you repaying more than double the amount you borrowed in the first place. When balances get high on cards with high interest rates, some people turn to balance transfers, or open a new card with a lower interest rate and transfer their balance. Thirty-eight percent of respondents had used a balance transfer to consolidate their debt, the highest percentage being baby boomers. Only around a third of millennials used this fix, while nearly 51% of baby boomers did the same.

With most credit cards having a different interest rate and rewards program, which type is the most common for Americans to own? Almost 60% of respondents owned a cash-back card, and 40% used a retail or store-specific card. Cards with low interest rates also made the top three most preferred cards, but student cards and business cards were much less common. 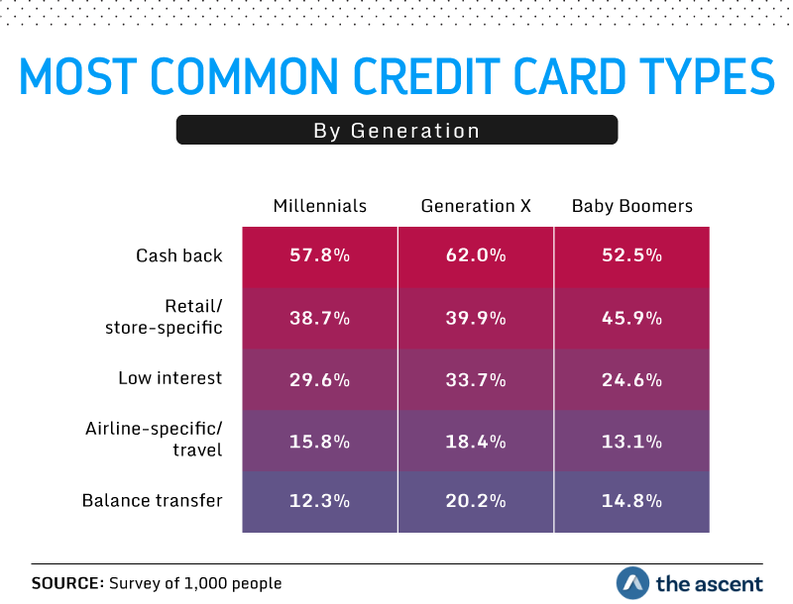 More Gen Xers owned each of the top five types of credit cards, except for retail or store-specific cards. For that type of card, 46% of baby boomers preferred it, while only around 40% of both Gen Xers and millennials did as well. Cash-back cards were much more popular with the two younger generations: Roughly 58% of millennials and 62% of Gen Xers chose that type of card.

New by next year 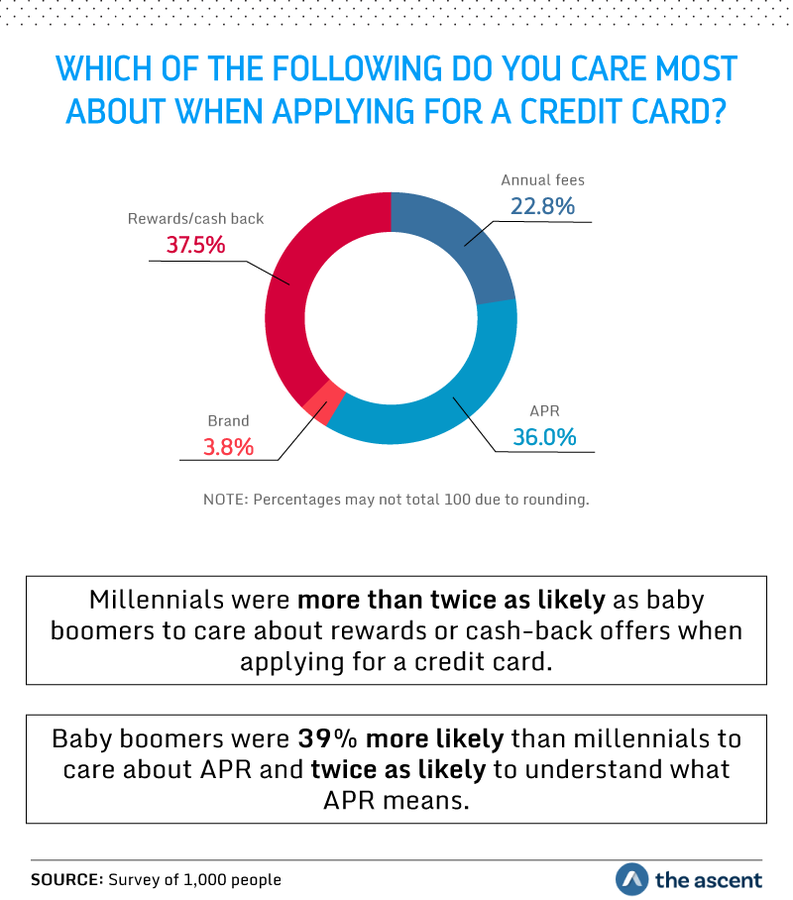 The majority of respondents cared most about rewards or cash back when applying for a new credit card, even more so than a low APR or any associated annual fees. What individuals looked for in a credit card was heavily dependent on generation, though. Millennials were more than twice as likely as baby boomers to care about rewards or cash-back offers when applying for a credit card, and baby boomers were 39% more likely to care about APR than millennials. Baby boomers were also twice as likely to understand what APR means, suggesting millennials may care more if they truly understood it. 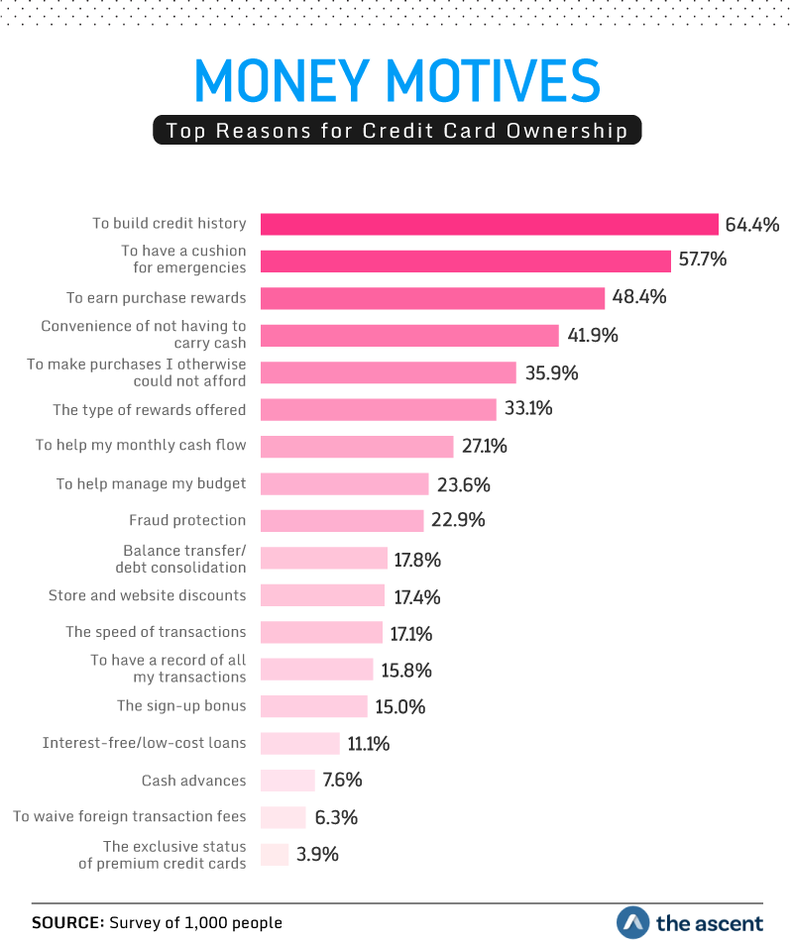 While rewards on purchases were the main factor in deciding which credit card to apply for, only 48% of cardholders owned a credit card for that reason. The majority of respondents actually owned a credit card to build a credit history, which has a significant effect on credit score. Another top reason for card ownership was for use in case of emergencies. In times that cash runs out, having an available balance on a credit card with a low interest rate can save many people from sticky situations. 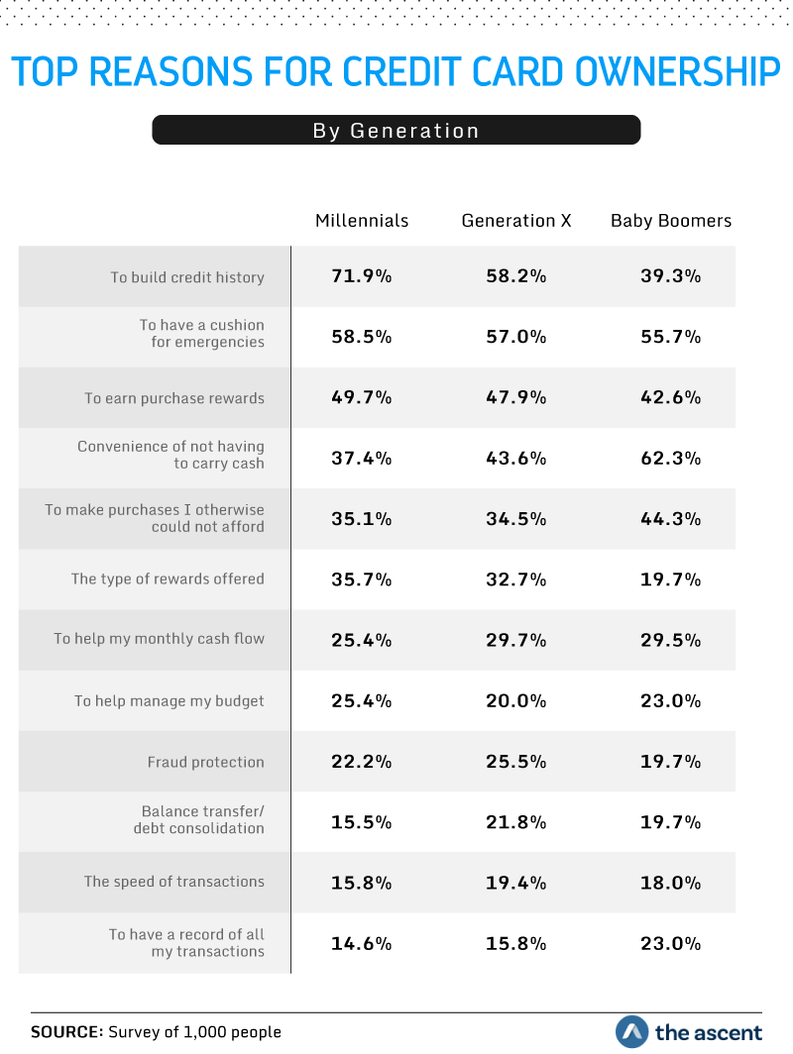 Owning a credit card for cushion in case of an emergency was pretty common across all generations. However, millennials were significantly more likely to own a credit card to build a credit history. Again, this is expected due to their younger age and potentially less experience. On the other hand, 62% of baby boomers owned a credit card simply due to the convenience of not having to carry around cash. 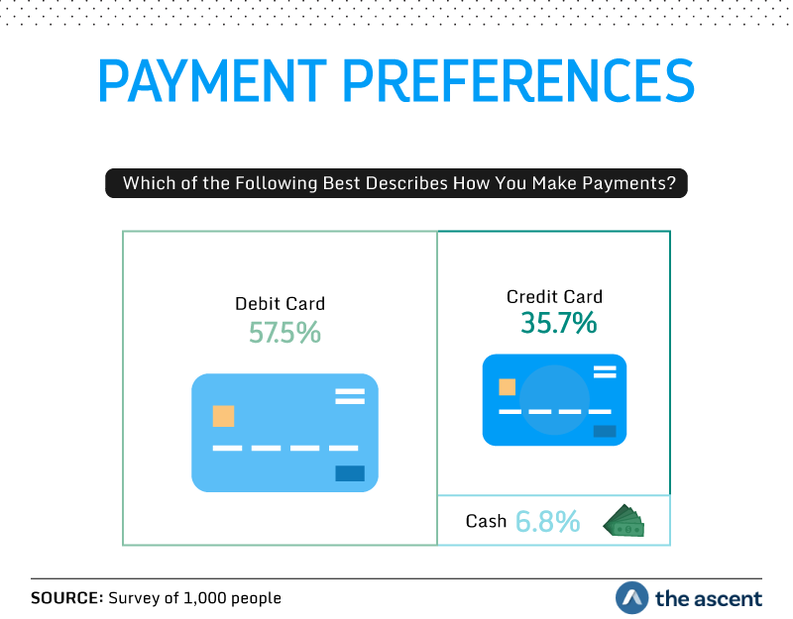 Although 7% of respondents preferred to use cash for most purchases, almost 60% preferred to make general payments with a debit card, and 36% preferred to use their credit card. Not only can using cards for everyday purchases earn users rewards, but also using a debit or credit card can make tracking expenses easier. Nowadays, every card comes with an app that makes it easy to view your daily, monthly, and yearly activity, so users can see where they need to cut back, if at all. Still, paying with cash can limit people to make purchases they truly can afford. Sixty-six percent of credit cardholders carried over a monthly balance -- something that wouldn't occur if they stuck to the cash they had available. 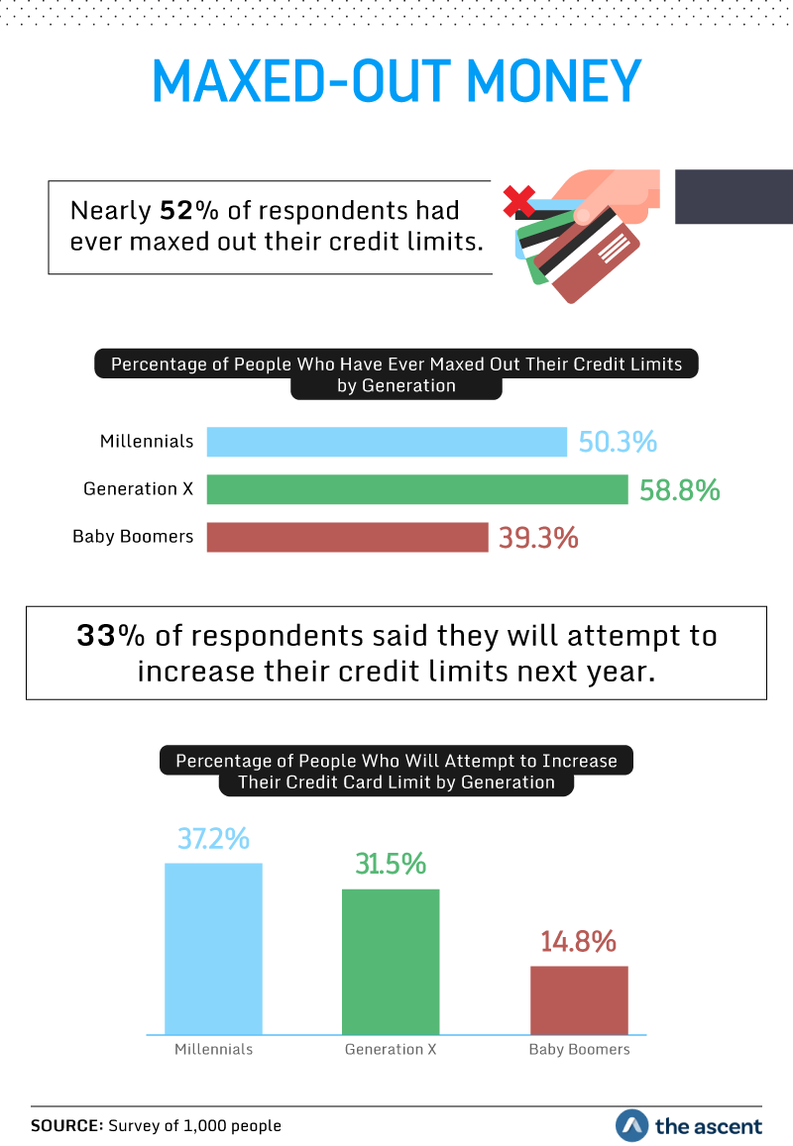 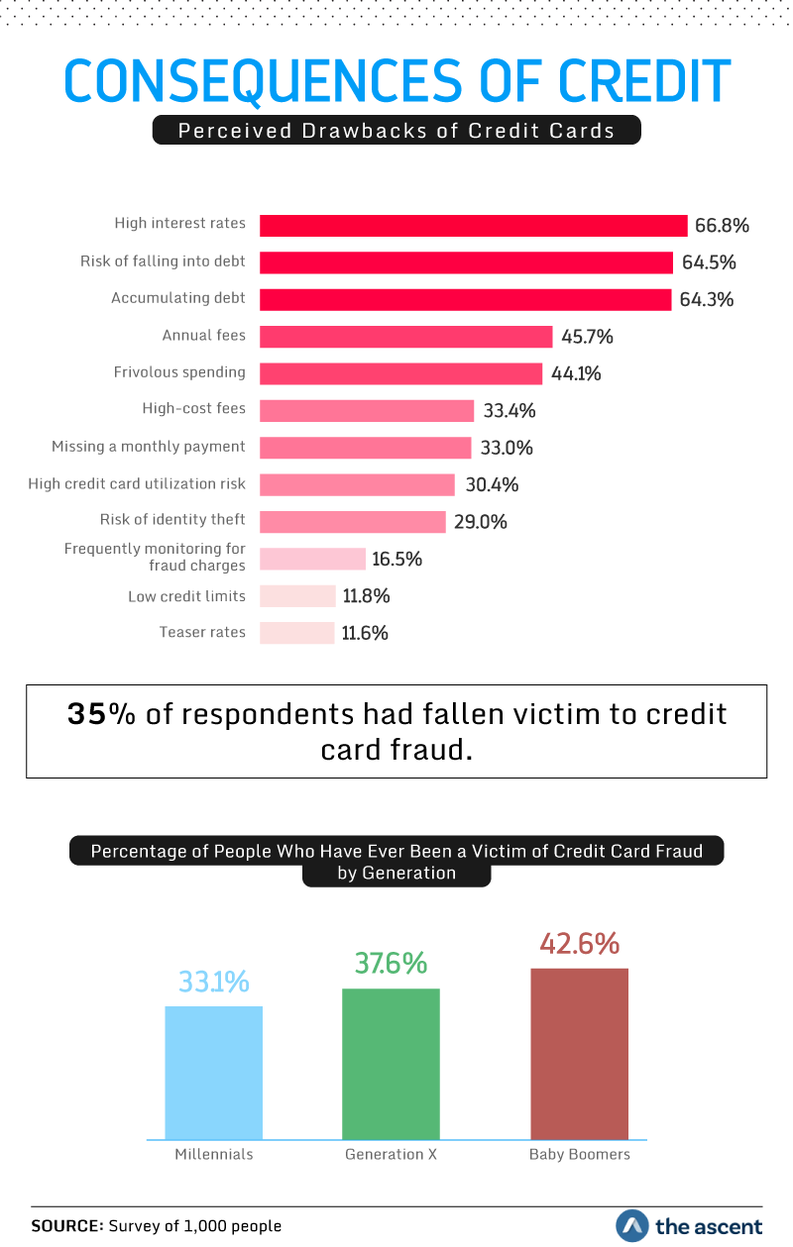 Reaping the rewards and having a buffer for emergencies are just one side of credit card ownership. Of course, some drawbacks come with swiping plastic too often.

Sixty-seven percent of respondents were most concerned with high interest rates, and another 65% were concerned about the risk of falling into debt. While 29% of respondents were concerned with the risk of identity theft, and only 16.5% frequently monitored their account for fraud charges, 35% had fallen victim to credit card fraud. Around 43% of baby boomers had been victims of fraud, while a third of millennials reported as much.

Keeping up with credit

Picking the right credit card and using it properly can not only save cardholders from becoming victims of fraud, but also prevent them from drowning in debt and lowering their credit score. There are obvious generational differences when it comes to views of and experiences with credit cards, but, in time, millennials are likely to catch up with baby boomers. Being educated on what credit cards are, how they work, and what credit really entails is vital to making smart financial decisions that have the potential to impact your future.

Whether you're in search of a new credit card or just want to learn more about savings and getting out of debt, we have all the information you need at The Ascent. Our team of experts does the hard work of vetting financial offers, so you don't have to. Simply browse through the best offers and read reviews, so you can be confident that your decision is financially sound.

For this study, we conducted an online survey of 1,000 people in the United States about their credit preferences and habits. To qualify for the questionnaire, participants were required to own at least one credit card and must have been at least 18 years or older. The survey measured credit card ownership, spending habits, and financial well-being among participants. Of the 1,000 people polled, 58.8% were millennials, 28.2% belonged to Generation X, and 10.4% were baby boomers. The remaining 2.5% of respondents were either a part of the silent generation or Generation Z. Of the respondents, 43.2% identified as male, and 56.7% as female. Only generations with a sample size of 26 or more respondents were included in the appropriate breakdowns. An attention-check question was administered throughout the survey to ensure respondents were paying attention and read through questions thoroughly. If a participant failed to answer an attention-check question correctly or entered inconsistent data throughout the survey, they were ejected from the study.

Some answer options may have been grouped, or bucketed, and relabeled for clarity. One limitation of this study is that respondents were presented with broad credit card categories instead of specific card types (the Chase Sapphire® card, for example). We understand that some credit cards may include multiple perks and offer a plethora of rewards, but for the sake of this survey, we focused on primary offerings per card (a travel or cash-back card, for example). The main limitation of this analysis is that the findings rely on self-reported data. There are several issues with self-reporting, which may include but are not limited to the following: exaggeration, telescoping, or attribution. The claims in this study have not been tested for statistical significance.