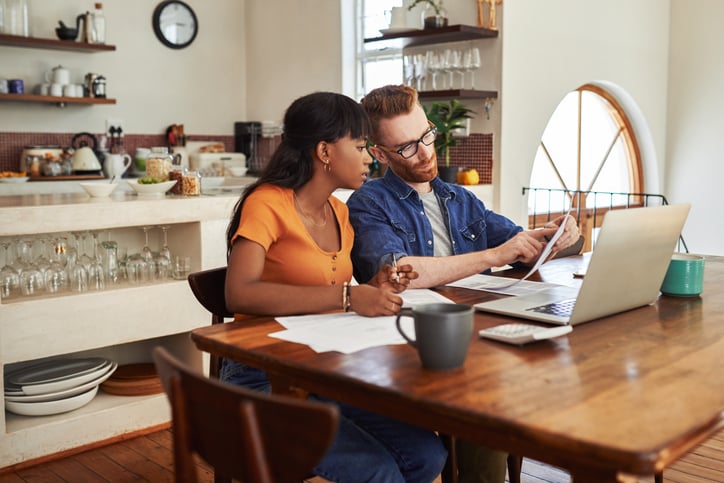 For years, study after study has shown that many -- if not most -- Americans live paycheck to paycheck, meaning their income and expenses barely add up each month. While plenty of headlines promise better personal finances with a higher income, it may not be that simple.

Unfortunately, it turns out that money doesn't necessarily buy financial security. According to one new report, 40% of U.S. workers earning $100,000 or more are still struggling to break out of the paycheck-to-paycheck cycle.

To folks managing to get by with significantly less, it may seem strange that $100,000 may not be enough for so many families. But the cost of living in the U.S. has long outpaced the average growth in income, even for folks making six figures.

Housing has been a growing source of pain for many workers -- and that also goes for the six-figure set, as they often have to live in pricey metro areas to keep those high-paying jobs.

And it's only gotten worse during the pandemic. According to popular housing platform Realtor.com, the median rent for the 50 largest metros was $1,575 in June of 2021, an increase of 8.1% from the previous year. That marks the highest rents ever for 44 out of 50 of the largest metro areas.

Of course, if you're stuck in NYC or San Francisco, be prepared to part with nearly double that for a modest one-bedroom. Rents that high mean you could easily spend half of your net income -- or more -- just on rent, even if you're pulling in $100,000 before taxes. It makes saving up for your own mortgage seem impossible if you can't leave the city.

Everything else is more expensive too

Yet housing is only one piece of a very expensive pie. Healthcare costs have increased sixfold over the last few decades, and it's not unusual to spend hundreds a month on insurance despite employer contributions. The cost of food also keeps going up, as do other necessities like power and gas.

Then there are all the costs that weren't something we even had to consider once upon a time, such as internet and cellphone bills. (Try getting by at your high-paying tech job without an updated smartphone so you can be on call even on your days off.)

By the time you've paid out every bill, even a six-figure salary can seem small. And that's before you add in the ever-increasing cost of trying to raise your kids.

Lifestyle creep can also be an issue

All of this isn't to say that everyone making six-figures a year is struggling with just the basics. Some number of folks living paycheck to paycheck may be dealing with simple money mismanagement -- or the effects of lifestyle creep.

Essentially, lifestyle creep is when your income increases, but so does your (frivolous) spending. It can often happen so gradually and seemingly harmlessly that it can be hard to notice it until it gets out of control.

For example, a new promotion that comes with a raise could mean extra savings. But that new promotion may also come with extra networking expectations that mean you're spending more time eating out or traveling. Or maybe you need to dress the part for your new role; updating your wardrobe rarely comes cheap.

Even something as innocent as splurging a little on a new (or even used) car can be a much bigger hit than it would have been a few years ago. According to Kelley Blue Book data, the average sticker price on a new car hit an all-time high last month when it reached $41,263.

Will the remote work revolution help?

There are a lot of suggestions for how to break out of the paycheck-to-paycheck cycle. For workers in the $100,000-income range, one of the best solutions may actually be the growing trend towards remote work.

Many high-paying jobs, particularly in the tech sector, were among the millions that went remote over the last couple years. If those jobs stay remote -- something workers are increasingly demanding -- then there could be a wave of workers heading out of expensive metro areas into more affordable towns and cities.

And that migration could have potential trickle-down effects. Metro areas could get more affordable as property owners compete for renters. It could also enliven smaller towns that have been struggling to keep afloat in a city-centered economy.