Not long ago, some considered Citigroup and American Airlines ready for the grave.

To paraphrase a tired but accurate saying, you can't keep a good stock down.

The past decade saw corporate America endure a financial crisis. More than a few companies during and after that time looked as if they'd go to their graves, but somehow they found new life. Here's a look at two businesses that escaped apparent doom. 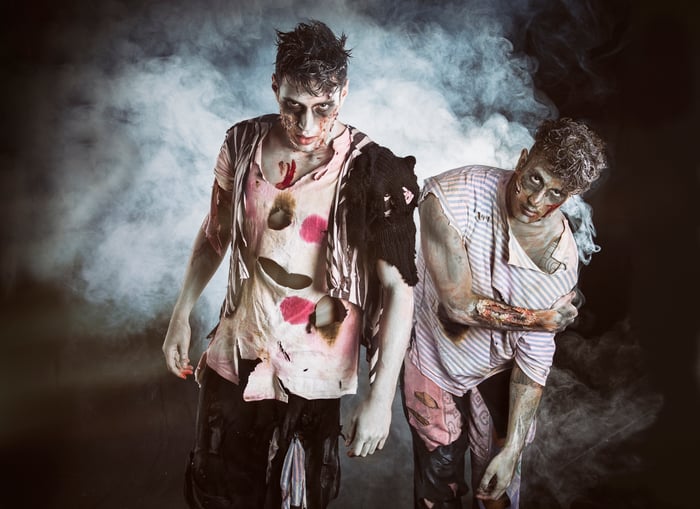 One of the worst crisis-era casualties in the financial sector was Citigroup (C 0.04%). The bank's heavy involvement with the dubious investments popular at the time plunged it so deep into the red -- it lost $17 billion in a single quarter of 2008 -- that it seemed certain it would drown. The long-suffering U.S. taxpayer extended a rescuing hand, in the form of a $50 billion government bailout, to bring Citi out of the drink.

Subsequently, the bank limped along, not least by packaging its portfolio of bad assets into a subsidiary called Citi Holdings that contained an eye-watering $800 billion-plus worth of junk.

Quickly getting to work, the bank improved its lending practices, raised fresh capital, and aggressively sold off the Citi Holdings assets. Before long Citi was profitable again. These days, it lands consistently and heavily in the black on the bottom line. Its 2016 result, coming in at nearly $14.8 billion, was the second highest in a five-year period. Over that time, profitability hasn't dipped below $7.2 billion.

Meanwhile, the Citi Holdings dodo bird has gone extinct, having been effectively folded into the bank's regular operations. That $800 billion and change had been eviscerated to the point where it held a relatively puny $54 billion worth of bad stuff -- a mere 3% of Citi's total assets.

Although the company hasn't yet reached the levels it was at before the crisis -- in terms of share price, dividend payout, and top-line performance -- it's doing far better than it was during those dark days. The stock price has more than doubled, while Citi is planning a 100% raise in its quarterly dividend, to $0.32 per share, plus a mighty $15.6 billion share-buyback program over the next year.

Your flight has been upgraded

On the back of a slump in the airline industry, compounded by poor performance, the entity now known as American Airlines Group (AAL 0.37%) declared bankruptcy in late 2011.

The company, then known as AMR, limped on nevertheless, until late 2013, when a merger with US Airways wrenched it out of bankruptcy. The combined entity became American Airlines Group; the US Airways brand was phased out.

Big corporate transformations can be difficult, and the refashioned airline wasn't a highflier at the beginning. Its first set of annual figures, which included less than a month of US Airways' 2013 results, revealed a net loss of over $1.8 billion.

But once the performance of the two component parts fused together, that yearly bottom-line loss flipped to a profit and has stayed there. Meanwhile, a serious drop in oil prices starting in mid-2014 drastically cut what's typically the No. 2 cost item for airlines. American Airlines' spending on the combustible stuff fell a steep 41% in fiscal 2015 from the previous year's level.

Since then, oil hasn't recovered to any meaningful extent, the company has kept its employees sweet, and itself competitive, with a recent round of pay raises, and the U.S. dollar has strengthened, making international travel cheaper for our citizens.

On top of that, airline stocks in general and American in particular got a huge vote of shareholder confidence earlier this year. Warren Buffett revealed that his Berkshire Hathaway had invested over $8 billion in shares of the big domestic carriers, including, of course, American.

Although American's stock price took a hit earlier this year following those wage increases, it has since recovered. These days, it trades at more than double its level when the merger deal was announced.

At any given time, there are plenty of companies on the stock market that are down on their luck. Perhaps bad management has driven investors away, or their industries are in a slump, or they're on the ground for one or several other dispiriting reasons. Long-term, buy-and-hold investors should keep an eye on these businesses. After all, one of them could pull a Citigroup or American Airlines Group and pop up suddenly from the ground.

Why Shares of American Airlines Are Flying Higher Tuesday
357%