Pandemic prices have driven these three blue-chip stocks down close to 50% of their pre-pandemic prices -- and in one case even lower.

It may sound callous to say this, but if you are looking to invest in a blue-chip stock at a bargain price, then the middle of a pandemic-fueled recession just might be the best time to do it.

"Thanks" to the COVID-19 crisis, the stock market has been thrown into turmoil. Profitless but fast-growing tech stocks that are seen as well-placed to thrive in an economy where everyone works from home have exploded in valuation these past few months. At the same time, the share prices of giant stalwarts of the old economy -- what we might once have called the normal economy -- have been gutted, down 50% (plus or minus) since before the pandemic. 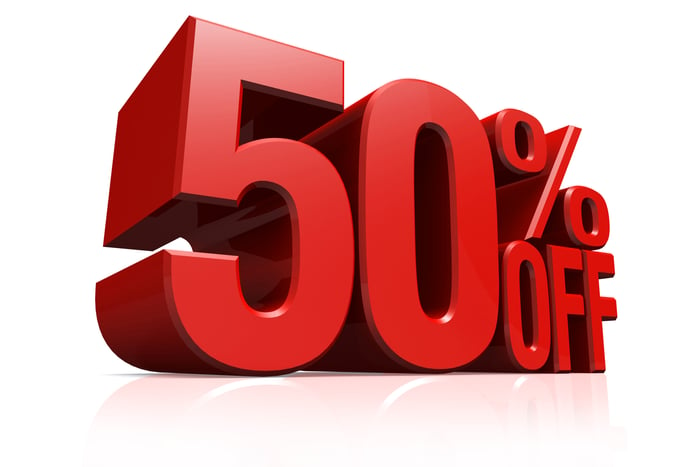 Get these three blue chip stocks on sale for 50% off (or close to it). Image source: Getty Images.

Let's start with General Electric, a stock that's such a bellwether of the U.S. economy that you can literally look at its stock chart and immediately know what dates the economy went into recession over the last 20 years. 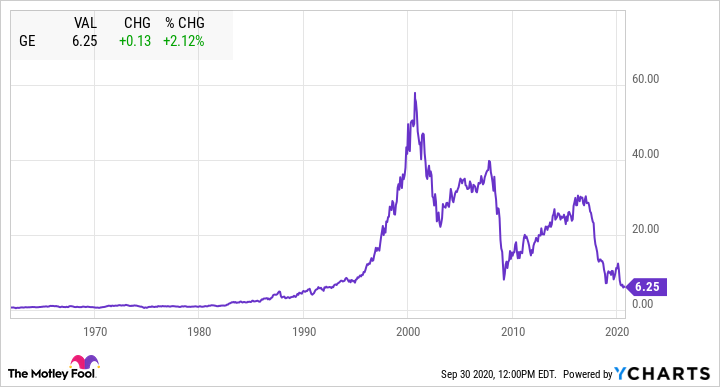 This particular recession, GE stock is down by more than half from its February highs. There are any number of reasons for this, from recessionary lack of demand for power hurting sales of power-generating equipment, to a hobbled airline industry not needing to buy new GE engines for its airplanes, to hospitals that lost elective procedure business during the Great Lockdown not needing to buy medical equipment from GE Healthcare. For all of these reasons, GE suffered a 24% decline in sales last quarter, and reported a $0.26 per share quarterly loss.

On the plus side, though, GE didn't burn as much cash as it had thought it might last quarter. Indeed, because GE cut capital spending during the pandemic, its burn rates hardly changed from a year ago. And the company traditionally generates more free cash flow in the second half of its fiscal year (that's the half we're beginning now) than in the first half -- so things should be looking up.

Indeed, management is promising a return to positive free cash flow next year, and -- potentially -- could be back generating annual free cash flow in the range of $5 billion to $7 billion within the next five years. For a stock price that translates to a market cap of $53 billion and change right now, it works out to as little as a 7.6x FCF valuation. For a stock with GE's reputation, I'd call that cheap.

Citigroup is another blue-chip name on sale. One of the biggest banks in the world, Citigroup's stock remains down nearly half from its February highs, and trades at a deep discount to book value -- about 0.5x book, which is cheaper than any of its too-big-to-fail rivals in the U.S.

The pandemic, and fears of what it might do to Citigroup's business, are certainly the largest part of the reason for this. Despite growing its "revenue before loan losses" 5% in Q2, Citigroup suffered a 73% decline in earnings as it subtracted $5.6 billion from its profits as an "allowance for credit losses" -- meaning reserves against anticipated loan defaults.

And yet the very size of the reserves Citigroup has taken could become a key to the stock's revival. As the moderator pointed out in Tuesday's presidential debate, against all odds, the U.S. economy seems to be recovering from the Great Shutdown faster than expected. If this leads to fewer defaults than Citigroup prepared itself for last quarter, then some of those loan loss provisions could end up being reversed, turbocharging the bank's profits in future quarters.

Indeed, Wall Street analysts already seem to be anticipating a recovery, as Citigroup's stock, which sells for 7.3 times trailing earnings, costs only 6.9 times the earnings it's projected to make next year. With a cheap stock price, good growth prospects ahead of it, and a generous dividend yield of 4.8%, Citigroup is yet another beaten up blue chip worth checking out.

I would argue they do not.

For one thing, at just 0.64 times trailing sales, Huntington Ingalls stock now trades for about a one-third discount to the average, historical market valuation of major defense contractors (which is one times annual sales). Or if you prefer more traditional metrics, the stock costs about 10.8 times trailing earnings (which were depressed by Covid, but will certainly perk up as the U.S. Navy continues its drive to rebuild a battle fleet of 355 ships -- because while other defense contractors also build warships for the Navy, ships are all that Huntington Ingalls builds).

Best of all, even Huntington's earnings don't give a full picture of how profitable this company really is. As data from S&P Global Market Intelligence confirm, for every $1 Huntington Ingalls reports as "GAAP profit," this company churns out about $1.42 in actual free cash flow -- meaning the stock's price-to-free cash flow ratio is only 7.6.

In my opinion, Huntington Ingalls' 2.9% dividend yield and strong prospects for future profits growth more than justify that low multiple. All three of these stocks look like they're on sale to me, but Huntington Ingalls' sale price may be the best of the bunch.

Why Shares of American Airlines Are Flying Higher Tuesday
413%